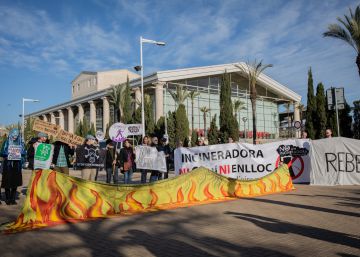 The Generalitat has convened this Friday the first climate action summit, an appointment to which he has called to companies, social agents, institutions and universities, but to which he has not invited the movements by the climate, that have protested in the street. “Holding a climate summit and not inviting the entities that have put the climate emergency at the center of the political debate is contradictory and an indicator of the lack of coherence of the summit, we believe they want to silence us,” said Àlex Guillamon on behalf of the Climate Movements Network, which brings together Fridays for Future, Climacció, Rebellion or Extinction or the Global Justice Movement.

Regarding the absence, Catalan Government sources respond that these platforms are not formally registered in the registry of associations and point out that, if they have given priority to companies, it is because they are the ones who must commit to the fight against climate change, an area that The entities already act.

The summit, chaired by Quim Torra, president of the Generalitat, is held at the National Theater and arrives seven months after the declaration of climatic emergency by the Generalitat. A statement that it was held, on the eve of municipal elections, without concrete measures to address it and without assigning a budget.

During these months, 12 participatory sessions have been held in which almost 200 entities and organizations have participated: representatives of municipalities, the port and the airport, the mobility sector, industry, primary sector, the automotive industry or the financial sector. But not the classical environmental entities or the movements for the climate that have had more prominence in recent months.

From the summit this Friday is expected to leave a document of commitments that will be voluntary for companies or organizations that decide to join. “We want it to be a notarial act, there will be a follow-up regarding the commitments so that it has an oil stain effect,” explained the Minister of Territory and Sustainability, Damià Calvet.

The summit program is structured in three dialogue tables: one with the local Administrations; another with Agbar, Seat, the office of architects Batlle i Roig, the Autonomous University and the Cercle Financer; and a third with Bodegas Torres, Bon Preu, representatives of the tourism sector and the port of Barcelona.

The movements for the climate that protest outside the National Theater have denounced that the Generalitat wants to “make them invisible” and have presented a document with 11 requirements that they understand are urgent measures to take. Among the demands is that the planned extensions of the port and the airport of Barcelona and some roads are paralyzed; the implementation of an access toll to Barcelona that costs 10 euros for any vehicle that does not carry three or more passengers; or that more than half of the electric energy comes from renewables before 2030. Entities also require that single-use plastics be banned; that the farms of intensive cattle raising be reduced, or to promote the fishing of proximity.

At the start of the summit, the deputy mayor of Urban Planning, Ecology and Mobility of the Barcelona City Council, Janet Sanz, recalled that the city declared the climate emergency last Wednesday and has “missed” the presence of entities in the living room.