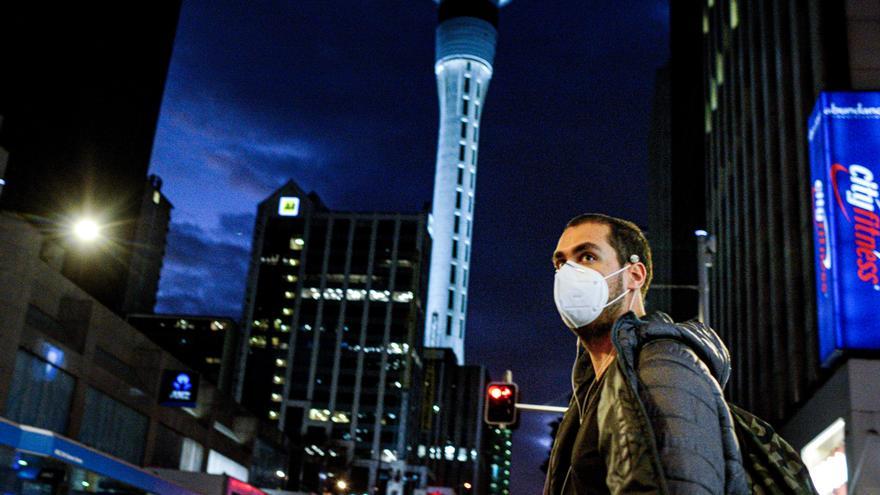 New Zealand health authorities are partially closing down downtown Auckland, the country’s largest city, on Friday and asking workers to stay home while they try to track how a student got COVID-19.

“As a precaution, we ask those working in central Auckland to do so tomorrow from home where possible,” said Chris Hipkins, Minister of COVID-19 Response. The number of Auckland downtown workers being asked to stay home on Friday is 100,000.

“If by force they have to go to the area, please wear a mask and keep the minimum distance while the health authorities continue to search for the origin of this contagion,” the minister said. The City Hall, the municipal library and other public centers will remain closed this Friday.

The mysterious contagion of a university student worries the authorities because it has no link with any risk zone such as the border. The student took the test late on Tuesday and was told by health authorities to stay home until the result was received. But on Wednesday he put on a mask and went to work in a position where he has to deal with the public.

“Now we know that in this case she called her work to say she was sick after they advised her to isolate herself, but after a conversation with her boss she went to work and wore a mask,” the Ministry of Health reported.

The positive of the test arrived on Thursday. She was transferred to a quarantine center and has been interviewed on multiple occasions, but there is still no information on the possible origin of the infection. Two of her friends have also been quarantined, despite feeling fine.

Being contagious, the student hopped on several Uber’s and was in four restaurants and cafes in Auckland’s downtown district to eat and take away food. He also visited Smith & Caughey’s, one of the most important department stores in the country. The authorities have published some of the movements of the person infected even by time slot.

Residents of the apartment block where the woman lives have been asked to isolate themselves, where common areas have also been closed and a mobile unit has been displaced for tests. The block is next to a quarantine center.

“I know that having another case of community contagion is not the best, but we have been through this before and we have overcome it by following the rules. Please remember the importance of the mask, of the COVID-19 application for the mobile , the rules of good hygiene and minimum distance. Be attentive to each other, be patient and be careful! “, has published the mayor of the city, Phil Goff, on his Twitter account.

Health Director-General Dr Ashley Bloomfield has communicated that urgent genetic testing is underway and Auckland residents should keep their guard up regarding protection efforts, including not going to work if they feel ill or wearing masks. in public places and on public transport.

The infected student had not attended university or attended conferences since mid-October. “We are urgently working on tracking the movements that this person made in the last week to find out how he was infected,” said Bloomfield. “Genetic testing of the case is also being done to help us understand if there is any link to previous cases.”

Hipkins has asked the residents of Auckland not to panic and has assured that the response of the health authorities is “calm and methodical”.

In August Auckland began a second lockdown three weeks after a group of more than 100 infections was detected in the south of the city. With 1.7 million residents, Auckland is the largest city in New Zealand.

According to Lesley Gray, Senior Lecturer in Health at the University of Otago, New Zealanders are becoming complacent about protective measures against the coronavirus. “Based on the information we have on the Auckland contagion, it seems a bit concerning that it has no obvious links to previous cases,” he says.

“Earlier this week I traveled [entre Wellington y Christchurch] and it was very interesting to observe the minimal use of hand sanitizers in many public areas, the few control points with the application of COVID-19 at the airport and I only saw one person wearing a mask. ”

Fewer than 2,000 people have been infected with COVID-19 in New Zealand and 25 have died from the disease. Worldwide the effectiveness of the The New Zealand government’s elimination strategy and the hard line adopted in border policy. The freedom that its citizens enjoy is envied. Parties and concerts are organized and it is possible to go out to eat and drink. Prime Minister Jacinda Ardern has resisted pressure from Australia and other Pacific nations to open the border.

Communicable disease experts have also praised New Zealand’s response, although some say borders remain a risk zone and its management has not always been exemplary.