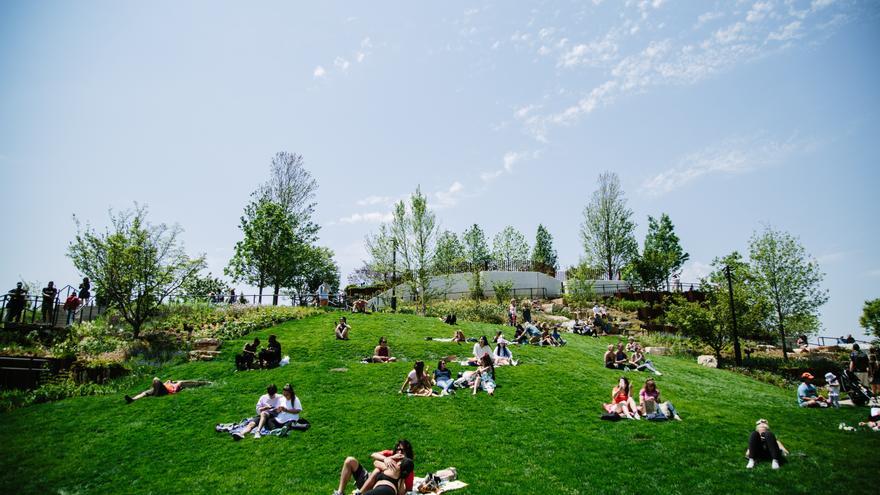 New York, May 21 (EFE) .- New York once again felt the excitement of the tourist crowds this Friday at the expected opening of Little Island, an oasis of almost one hectare that floats on the Hudson River and that has taken seven years to develop. erected since it was conceived by media mogul Barry Diller, its main financier.

From 6 in the morning, when it opened its doors almost by surprise, hundreds of New Yorkers came to explore this new public park installed on a monumental architectural platform, formed by 132 concrete “tulips” that emerge from the water and form reliefs to likeness of a floating leaf.

It is a garden of delights “open to all” and “a gift to New York so that people have access to a combination of nature and art”, with performances – which will be generally free – of music, dance, theater or comedy, Little Island executive coordinator Jessie Long explained to EFE.

The park comes to revitalize a pier that was devastated by Hurricane Sandy in 2012 and that has a strong historical component, since at the beginning of the last century it was the terminal that welcomed the survivors of the Titanic and decades later it was a vibrant musical and of the LGBT community, before going into decline.

With 350 species of flowers, trees and shrubs scattered among hills and green esplanades overlooking Manhattan, to which is added a plaza with “food trucks” and an amphitheater with sunset views that will premiere programming in June, the Big Apple today added one more incentive to its reopening planned for the summer.

“I hope Little Island serves as an enigmatic oasis for anyone who visits, a place to take a stroll and be happily surprised with each turn, lie back and graze in the landscape, and be entertained, educated and stimulated by our programming,” he said. in a statement Diller, one of the founders of Fox.

And it is that his “little island” is the icing on the cake of the Hudson River Park, a river park of more than six kilometers that bathes the west of Manhattan and whose managing consortium decided in 2014 to have the multimillionaire businessman for a public-private collaboration that does not it has been devoid of opposition and almost ended up in a drawer.

The project faced legal problems due to its environmental impact on the aquatic ecosystem and an alleged lack of transparency, alleged especially by magnate Douglas Durst, developer of several well-known New York skyscrapers and who generated headlines about a battle of the titans.

Finally, the president of the internet conglomerate IAC contributed 260 million dollars to the project and a financial commitment of another 160 million to maintain it for the next two decades through the philanthropic foundation that he runs with his wife, the fashion designer Diane Von Furstenberg. .

The design was led by British architect Thomas Heatherwick, creator of the controversial tourist sculpture The Vessel, a complex 45-meter high spiral staircase of metallic sheen that leads to nowhere in the center of the nearby upscale Hudson Yards neighborhood.

The Diller-Furstenbergs, who have a lot of influence in western New York, have been involved as patrons in important tourist attractions such as the High Line, the Whitney Museum or the Museum of the Statue of Liberty, they say, because they love the ” art and public spaces “and are” fortunate to have resources. ”

Speaking to CNBC, Diller was optimistic about contributing to the resurgence in what was the epicenter of the pandemic: “For a year this was deserted. It seemed that a nuclear explosion had taken humans. Now we come out of this and you can see it in the streets: people are happy. I’m happy, “he said.