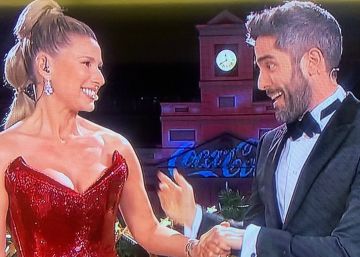 The 1 has once again led the audience to say goodbye to the year, with 6.15 million viewers who chose the public network to follow the bells with Anne Igartiburu and Roberto Leal, while Antena 3 was again in second position, according to informed on Thursday the consultant Barlovento, with data from Kantar Media. A total of 16.7 million Spaniards watched the chimes on the different television networks, representing a 95.6% screen share.

The 1 repeats leadership at the time of the twelve grapes to achieve a 35.2% screen share, although it drops 5.6 points compared to 2018, the largest decline of all televisions, and loses almost a million viewers. Antena 3, with Cristina Pedroche and Alberto Chicote as presenters from the Puerta del Sol in Madrid, is again placed as the second most watched network, with 4,634,000 viewers and a 26.5% audience, 2.8 points more than in 2018.

The third most followed chain was Telecinco, which opted for Paz Padilla and Jesús Vázquez to give the grapes. A total of 1,474,000 viewers (10%) chose this chain that rose 4.7 points. TV3, with Toni Cruanyes, María Fernández Vidal and Tomàs Molina, who gave the bells from Barcelona, ​​dropped 1.4 points nationally and 4 points in Catalonia with 1,025,000 viewers (39% share of screen in Catalonia). On the other hand, 734,000 spectators (4.2%) chose to take the grapes with La2, which rose 0.9 points compared to 2018.