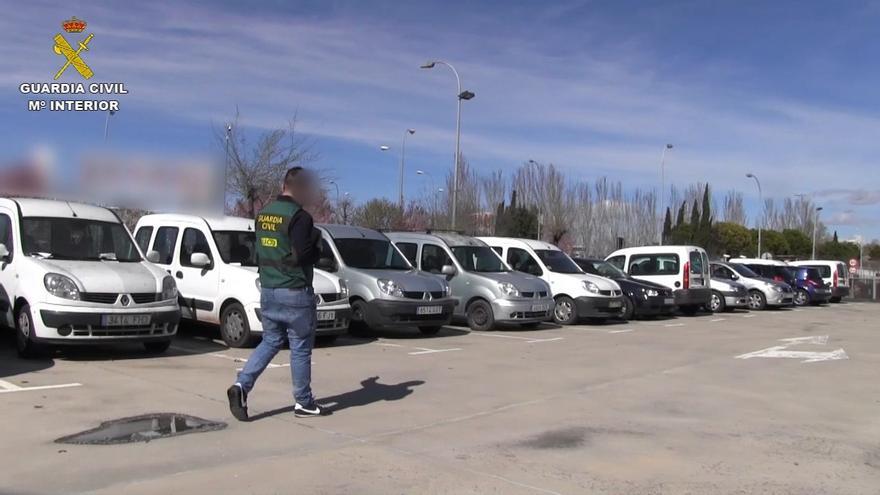 The pandemic has reduced crime in general, also the car theft. The restrictions on mobility in the successive states of alarm have had a lot to do with this decline, but the bands are recomposed and adapted to the demands of the market to offer the customer stolen hybrid cars in just 20 seconds.

Thus, and according to the crime balance of the Ministry of the Interior, between January and March of this year 7,243 vehicle thefts were reported, compared to 5,393 in the same period of 2020 (it was on March 14 of that year when the confinement was decreed).

Surely the 39 hybrid cars valued at more than 3 million euros The theft of which was detected by the Civil Guard’s Central Operative Unit (UCO) in the Tolex operation are included in these complaints.

The head of the Automobile Organized Crime Section of the UCO, Lieutenant Óscar Trasorras, explains to Efe an operation that allowed the dismantling of a gang made up of five people, two of whom, the leaders, were of Bulgarian origin and highly specialized in this crime. One of them, an old acquaintance of the researchers.

After the “stop” of car thieves During the state of alarm – they could not take advantage of the impunity of the night because there were more controls or the passage through ports such as Algeciras due to the closure – the gang of Bulgarians got down to work, as the UCO later found out .

As Lieutenant Trasorras relates, the agents of his section, as usual, they analyze car complaints almost daily that are stolen in Spain and draw their own conclusions.

And this time the statistics reflected an increase in thefts of hybrid cars, such as the Lexus RX450 (the one of the Luxury range it costs almost 100,000 euros), valued at almost 70,000 euros; the Toyota RAV-4 or the Toyota C-HR, and aimed at the same “modus operandi”.

It was in November of last year when the UCO agents launched the investigation, says the lieutenant, who emphasizes that the theft of hybrids not only responded to reasons of the demand for order itself, but also to the new policy for the market of the car that aims to reduce pollution and reduce diesel.

For these expert car thieves, it took 20 seconds for them to a high-end car will change owners.

But before the robbery, which they perpetrated with what they call “the machine” – an electronic control unit – in just 20 seconds, heBulgarians “inspected” the different areas of Madrid aboard a stolen Lexus that had been registered with a legal vehicle of the same make and model.

Car parks, restaurant areas, the streets themselves … The thieves toured the capital and other municipalities of the Community of Madrid to set their objective.

Once the car is “checked in” that interested them, they approached him and verified that the environment was safe, above all, that there was no police presence.

If they did not detect nothing “suspicious”, one of them removed the headlight from the car, from the passenger area, inserted the “machine”, entered the vehicle and started driving by simply pressing the “Start Stop” button, preceded by the Lexus driven by another member of the network .

But if the maneuver was not going to be safe, they would mark the vehicle to make a follow-up and remove it at the right time. Even inside community garages that they entered when the “booked” car did as well.

Already the vehicle in their possession, they transferred it to shopping center parking lots and even hospitals such as the one in the Madrid town of Arganda del Rey. They left it there to “cool down”, that is, to verify that their owners or the security forces had not located them.

Because, in addition, to prevent their location they changed their license plates for others that they corresponded with those of cars that circulated legally.

And when they considered that the “cooling” was already sufficient, they were transferred to warehouses, some in the town of Meco, while they prepared the falsified documentation correspondent.

To complete the process it was necessary to falsify the chassis number, a task that was carried out a Spaniard of Moroccan origin living in Murcia and great expert in this matter. So much so that, as the UCO lieutenant emphasizes, the forgery was “undetectable” even for dealers.

This man had a convalescent relative in a hospital near the capital and took advantage of some of his trips to visit him, land in Madrid and complete your “job”.

And already endowed with “legality“The next step was to sell them, get them out of Spain. For this, the participation of another Spaniard of Moroccan origin living in Seseña (Toledo) was essential, with contacts with a Belgian transport company that took the cars out in trucks seven at a time.

The business He did not know they were stolen, as investigators have found.

The cars traveled some to Bulgaria by road and others to the port of Nantes-Saint-Nazaire (France), where they were shipped to the African continent.

Between 3,000 and 6,000 euros was the sale price of the vehicles, some stolen to order and others to be put up for sale in those countries. Someone else passed into the hands of a member of the network as payment for their participation in the illegal activity.