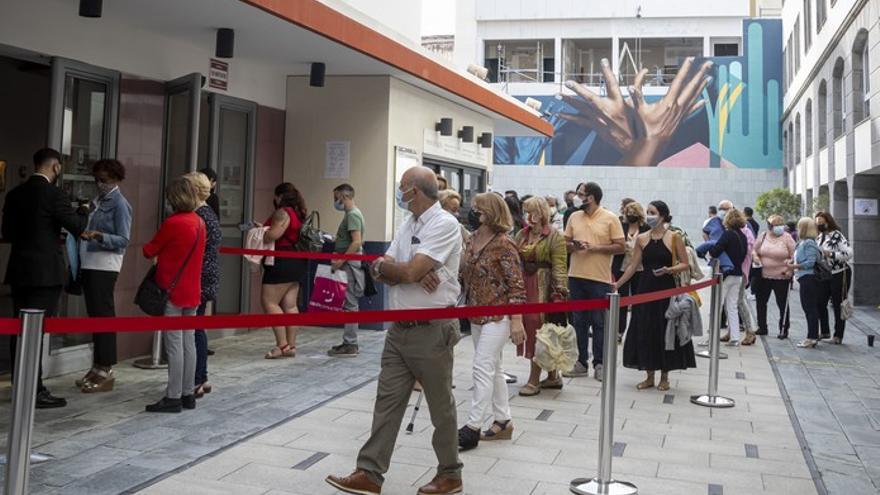 During the presentation, the Minister of Culture of the Cabildo de Gran Canaria, Guacimara Medina, stressed that “the Cuyás will advance all its shows one hour at the request of the Triana merchants.” It should be remembered that before the pandemic, the works used to begin at 8:30 p.m., but in recent times the performances have been brought forward an hour to facilitate the return of the public to their home before curfew, a measure that seems to have benefited the residents. locals in the area, so those responsible for Cuyás have chosen to keep it for the next few months. Medina, who attended the presentation accompanied by the director of the stage, Gonzalo Ubani, added that “both the season tickets and tickets for these shows will go on sale once it is known how the epidemiological situation is evolving and the health authorities establish the new gauges ». This year the titles will include media stars such as Ana Torrent, Ricardo Darín, Asier Etxeandia or the famous singer Kurt Elling.

Ubani recalled that The Butterfly Hex, with which the program begins in September, “is the first play by a 20-year-old Lorca who, by the way, was a resounding failure.” However, it was saved thanks to the dancer La Argentinita, who performed the dancers of the work in the main role of a butterfly. And that is the thread that the Andalusian Flamenco Ballet pulls “to pay tribute to the women of dance who surrounded Federico throughout his life.” A play, starring insects that provide a disturbing environment, with the air of a children’s story, but that contains a deeply human drama. the second work, The Maids, by Jean Genet, arrives in October. in a version of Paco Bezerra. “The maids is an immeasurable text,” said Ubani, “so each version is, even if it is not expressly desired, a novelty.” In his opinion, “Luis Luque has surrounded this new proposal with an enormous coldness, almost close to the theater of Gordon Craig and his super puppet”. Ubani highlighted how the terrible suffering and lack of affection of the protagonists is palpable in this work ”. November will host the presence of dancers Lucía Lacarra and Matthew Golding with Fordlandia, “a dance reflection on video images and a creation in the midst of a pandemic, with a clear tendency to enjoy for the sake of enjoyment and the beautiful for the beautiful”, assured Ubani.

Another of the highlights will be Scenes from married life with Ricardo Darín and Andrea Pietra in a text by Bergman. The filmmaker “was – and that is how he always defined himself – a man of the theater,” says Ubani. «And I knew that it is not only through brainy text that the viewer falls in love. He knew perfectly what in a corny way he calls theatrical carpentry. ‘ Thus, the work «is a clear example that very serious issues can be dealt with with bursts of humor. Even if he is black and sometimes aggressive. And the fact that Darín is the protagonist “allows us – as on other occasions it has happened to us with Emilio Gutiérrez Caba or Marisa Paredes – that the public that enters to see him, leaves to see a Bergman”, he added.

In December Asier Etxeandía returns to Cuyás with Simply Perfect, a theatrical concert, a natural continuation of The Interpreter, which was the actor’s first visit. “An attempt – unsuccessful from the beginning – to channel the creative tidal wave of the singer, actor, crooner and master of ceremonies Asier,” said the director.

But Ubani put the accent on two plays that will be performed in January, “Both 23F and the two deliveries of Shock are important documentary theater exhibitions.” In the first case, «Álex Rigola – who had not set foot on the Cuyás for too long- And« has always had a very personal way of facing theater, I think very close to the young audience, and decidedly uninhibited ». The montage “has the essence of the Cercas book and, as Almudena Grandes said, it seems incredible that you are in full tension watching – in your case, reading – something whose history and outcome you know.”

On the other hand, Shock, directed by Andrés Lima, “addresses the results of the economic theories of Milton Friedman and his Chicago Boys in Latin America in the 60s and 70s. And they are, as everyone knows, brutal.” Thus, “it is difficult to summarize everything that the two installments tell, but I consider it to be the theatrical event in recent years”, reflects Ubani. In five hours – two and a half hours each delivery with a break – “we go from the Pinochet coup to the Gulf War, with terrifying scenes and others of pure laughter.” The conclusion is, as Walter Benjamin said, “that ‘there is no document of culture that is not, at the same time, of barbarism.”