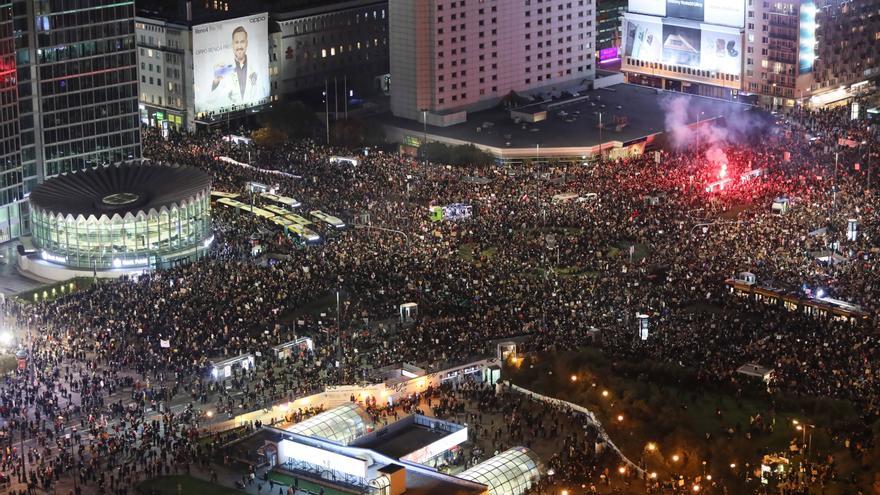 Tens of thousands of people have demonstrated this Friday in Warsaw against the ruling of the Constitutional Court that restricts the right to abortion. This is the third major demonstration in the Polish capital after the court’s decision. The authorities authorized the deployment of military police in support of ordinary police forces in order to prevent the concentration of people and the spread of the coronavirus.

Three large marches went through the city joining in the center: one started from the Plaza del Castillo in the old city, another from near the Prime Minister’s office and the third from the headquarters of the ruling party, Law and Justice (PiS por its Polish acronym). Most of the protesters were women, but there was also a large male presence under the slogans “To Jest Wojna” (This is War), “Jebac PiS” (Fuck PiS), slogans demanding freedom of choice on the issue of abortion and feminist messages.

Patrik, a young man who participated in the demonstrations, made it clear that it is not just a women’s problem: “We have come to support our sisters and mothers. Their right to decide on their bodies is in danger; no court can force them to give light a dead fruit, that’s just torture. ” Magda, another participant in the demonstrations, explained: “I protest because I cannot decide about my body. PiS and the Church have joined forces to take away their rights from women. I do not agree with that.”

The Polish President, Andrzej Duda, intervened during the day with a call for calm and suggested that there is still the possibility that the right to abort due to a malformation of the fetus is still partially restored, precisely what the Constitutional Court had excluded with its last decision. He clarified that this would be possible through a project “in a manner compatible with the principles of the Constitution of the Republic of Poland.”

For his part, the Prime Minister, Mateusz Morawiecki, assured in a press conference that Duda’s proposal will help calm the spirits in Polish society since it “practically solves these dilemmas and doubts that were raised in public space.”

No signs of the protests disappearing

The demonstrations, which have been sweeping the country for days, do not appear to be disappearing from the Polish landscape anytime soon. One of the feminist leaders, Marta Lempart, declared that on Monday they will once again block the main arteries of the city, as they did a week before. In addition, Lempart has promised not to leave unanswered the arrest of activists in multiple cities, such as a 14-year-old girl who was arrested in the city of Olsztyn for allegedly organizing pro-abortion demonstrations there.

On Thursday, Polish authorities said that people taking part in protests during the pandemic may risk jail terms of up to 8 years. The notice does not appear to have stopped the protesters. “We do not take it seriously. There are lawyers who say it is not legal, we are not threatening anyone, we are just protesting,” said Sbyszek, one of those attending the demonstration on Friday. Another of the protesters, who identified herself as María, added that to circumvent the limitations “we are officially walking, but we are doing it as a sign of support for the women’s strike after the decision of the Constitutional Court. I think that each one has her right.”

During the protests, minor incidents were recorded between women’s rights protesters and isolated far-right groups, and on several occasions members of the latter fired tear gas at protesters.