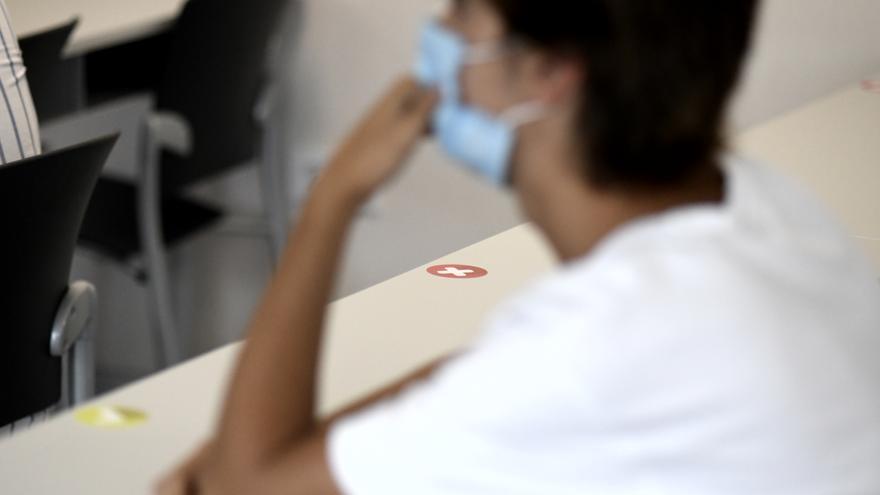 The university: abandoned in the pandemic?

In April, the Government of the Community of Madrid approved a consensual text with university authorities and students. In it, a great concern was declared and a battery of measures was deployed that intended to respond to the needs of the university community in the face of the pandemic so as, they said, not to compromise the 2020-2021 academic year. In the same way, the Community of Madrid affirms that it has been working on measures “that will be activated from next week” to provide sufficiently to the universities.

Now, if you stop at the protocols, you see that, apart from the 30,000 tests, most are measures that the universities themselves have to implement: capacity limitation, use of masks and distance, campus organization, cleaning and disinfection , online teaching, digital equipment … At the end of the course, as we already denounced From Más Madrid, the Ministry carried out some coordination tasks, but invested exactly zero euros in facilitating the closure of the university course in such difficult conditions. There was a feeling of abandonment on the part of the universities, for example, they had to acquire almost 1,400 computer equipment.

Is the situation very different now? What has the Community of Madrid done at the beginning of the university course?

The beginning of the course: shortcomings and proposals

The scholarship game has been shaken. First, the Seguimos scholarships, in theory designed to cover situations arising from COVID-19, will finally take the year 2019 for the purposes of determining income, and it will be in any case the universities who can process the consideration of the 2020 income, with the resulting bureaucratic overload. Second, the Excellence scholarships were temporarily suspended, although, due to the discomfort caused, the Ministry had to back down and maintain them. It is necessary to shield the increase in scholarships to 19 million, guarantee that they really cover the situations that have arisen and reduce the deadlines for recipients to receive aid before the start of the course.

The Government also takes out 40 million chest for digital transformation, which they announced on July 17. If you request and evaluate projects prepared by the governing bodies of the universities, it is difficult for the aid to be available for the beginning of the course, which is when it was urgently needed.

Finally, the Community of Madrid has received 291.6 million from the COVID-19 Fund mobilized by the central Government. Of these, 20%, or 58.3 million, had to go to higher education. With the course started, the background is still in limbo. Madrid affirms that it has allocated those 58 million to higher education and 49 of them will go to universities – an amount that, needless to say, should be used exclusively to cover needs that arose from the pandemic crisis, and not to finance outstanding debt from previous years. The question is: when are they going to enter it? We are at the end of the month, the 6 Madrid public universities have already started the course, and have not yet seen a euro of that fund, although during the pandemic they have had to spend on cleaning, strengthening communications networks, hiring support staff, practice simulators and computers, loan of materials to hospitals ….

There are many other measures that the Ministry should implement at the beginning of the course, as has also been claimed by the student representatives: aid for rent and transport, especially for students from outside Madrid, who have added difficulties with semi-presence. Reinforcement of public transport at peak times. Reinforcement of the PAS for attention to students at the beginning of the course, and the PDI for substitutions for foreseeable losses due to COVID-19. Administrative digitization, especially in universities that still have face-to-face enrollment systems. Aid to universities for the compensation of requests for cancellation or extension of enrollment or exceptional exemption of second enrollments. Study directed from the Madri + d foundation of the impact of the pandemic on the grades of students. Surveillance by the same agency of compliance with adaptation and quality standards in online and face-to-face teaching as well as in the teaching guides. Greater interuniversity coordination and with representatives of PDI, PAS and students. Greater transparency and accessibility of information on the website of the Ministry.

In summary; the measures taken by the Ministry for the start of the course are insufficient and they arrive late. But there is an even more worrying underlying issue.

There is an easy path, which is and always has been that of those who are concerned only with the immediate needs and demands of their time. According to this point of view, the important thing is pragmatism, to hurry, to adapt to what is given. Thus, the Madrid university needs toAccording to the usual vocabulary of the Ministry, “make the crisis an opportunity”, “strategic portfolio”, “emerging demands”, “new types of value” “innovation”. However, a philosopher long ago said that staying with those superficial needs would be comparable to having a temple with multiple exterior adornments, but no inner sanctum within. The archaic comparison is pertinent. Because perhaps what happens is that the university’s situation in this pandemic does not require inventing the Moon or brand-new solutions with many words in English, but rather addressing old problems.

So old, but so real, as the Madrid university has been underfunded for 25 years, with court decisions that year after year condemn the Government to pay; and those that remain, because the debt corresponding to 9 years is still in court. As old and real as the Community of Madrid is the Community that invests the least per student and burdens families the most with the cost of higher education. As old and real as it is delaying the already mandatory -accredited in CGPU- lowering of public prices, for which an NLP has also been approved in the Madrid Assembly -with a vote against the PP and Cs-, and also being precisely the refusal to compensate this part to the universities, which brings them judicial sentences year after year; the last time they were reminded, the Councilor threatened, in Parliament, to eliminate the entire science budget in the Community of Madrid. As old and real as a pandemic has had to come for the Community of Madrid to decide to increase its meager investment of 10 million in scholarships and bring it closer to the level of other autonomous communities.

If one wants to see the realization of these new inventions that are preparing to demolish the building built by three centuries of European Enlightenment, one only has to listen to the Ministry talk about its Law on the Learning Society. It is no longer a question of “higher education”, but of “learning”, in a comprehensive shift towards the rhetoric of competences and skills instead of content, where universities, of course, are above all places of training for employment. Madrid must be converted, they say, into a “hub education with research centers and technology-producing companies “, but without funding: the solution is, as always,” co-financing “, or the search for private financing, which could even affect the basic financing of universities in the form of of “financing by objectives.” Of course, not a mention of the university as an engine of equal opportunities and social progress. In a word: universities under siege, with the armor of scientific and academic autonomy destroyed, subjected to the frenetic rhythms of the market, profitability and employability before slow times that require research and knowledge.

The president of the rectors was cutting: “I do not hide from you that the system is on the verge of collapse and a situation like the one that has occurred now makes the situation much worse […] Voluntariness and solidarity have a limit and we have to consider the new course with situations similar to those we have experienced recently. “The Community of Madrid may well be the first autonomous community in all of Spain that has to listen the most Because there are words that indicate the extreme gravity of endangering very old certainties.