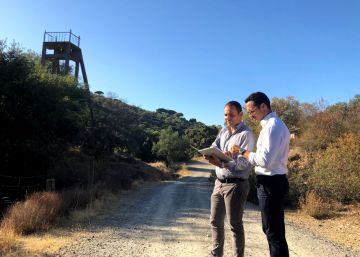 Valdeflórez is a place located about three kilometers from Cáceres where mining activity existed until the seventies. Now it can re-operate if the lithium exploitation project developed by the Extremeña del Lithio Technology company (owned by the Australian Infinity Lithium, with 75%, and the Spanish group Sacyr, with 25%) thrives. The plan took it out in competition in 2016 the Junta de Extremadura after verifying that the site was very rich in lithium. However, it has had growing opposition from local political groups (including the PSOE, now in charge of the mayor's office, and the PP, which was before it), neighborhood organizations and environmentalists, who have stopped the municipal corporation from granting permission to change of land use.

That is why the representatives of Infinity Lithium have moved this week to the city of Extremadura to present to these groups the news that they have incorporated into the initial project to convince them. According to Vincent Ledoux, executive director of the firm, the extraction process has been extended from 24 to 30 years and will lead to a lithium hydroxide factory next to the mine, and the extraction tons are reduced from 62 to 53.

According to Ledoux, it does not generate any risk for the environment, fertilizers will be used instead of chemical products, cuts and waste will be reduced, of which 99% will be pulverized rock. Another modification affects the restoration of the cut, since instead of filling it with water, the construction of an auditorium near the water sheet is proposed. Everything is about to negotiate

The project foresees an investment of 280 million euros, of which 83% will go to the industrial plant and 16 million to the rehabilitation of the area after the project. The company plans to start work in 2021 and produce lithium hydroxide in 2023. The extraction of lithium will last 19 years, while the processing will be extended to 30 years. During its construction, it will generate employment for 310 people and, once underway, will have 195 direct and 800 indirect jobs.

The objective is to supply 10 million electric vehicles in what is calculated as the second largest lithium deposit in Europe. The average expected salary for the fixed ones is 48,000 euros per year – well above the general average – it will spend 96 million in salaries during construction and 230 during the operation. The taxes generated amount to 900 million. The expected revenue from the sale of lithium hydroxide amounts to 5,500 million euros.

In addition, Infinity Lithium argues that the operation will form an industrial axis for Extremadura and for Spain that will be unique in Europe, essential for electric car batteries at a time when automakers are making the decision to implement their centers production.And in that, Spain, which is the second European car manufacturer, plays a key asset, according to Ledoux.

In that sense, the French executive comes with the express support received at the end of September by the Vice President of the European Commission, the Slovak Maros Sefcovic, who said that the company has very advanced conversations with four major brands in the automotive sector for the acquisition of 15,000 tons per year of lithium hydroxide.

However, the groups continue to oppose the project. After yesterday's meetings, the collectives have assured that they will study the changes. However, the most combative group against the plant, the Save the Mountain platform, refused to meet with Ledoux. This group is maintained in the response sent by letter to Sefcovic. “Europe needs people to ensure its stability and security, not the business of a few. The San José (Valdeflórez) open pit lithium mine project in Cáceres (Spain) of the Australian company Infinity Lithium is unacceptable because it violates, due to its proximity, protection laws for its citizens and its surroundings, and aims to destroy the three pillars fundamentals of life and health: soil, water, trees. We will not allow it to move forward. ”

And he continued: “If European policies are able to ignore the climatic and environmental reality, they have not understood anything. It cannot be sustainable because it destroys, in a short period of time, essential resources such as soil, forests and water, to obtain a very small amount of a metal, lithium, which is not renewable. It is hypocritical to support him. This mining project cannot be "impressive" for the transition to the electric vehicle, among other reasons, for:

However, according to Ledoux, the criticisms are unfounded. "It is a sustainable project, designed with the utmost respect for the environment and designed to minimize the impact on the environment, fauna and flora of the place." In that sense, it plans to build an internal osmosis plant that allows water to be recycled, on which it also ensures that “leaks to the aquifer (the Calerifo) that supplies Cáceres are geologically impossible”, one of the central criticisms of Salvemos la Montana.

It also maintains that the orography of the land will prevent the acoustic impact by acting as a barrier, apart from the fact that the mine will only act in day shifts. Additionally, it will minimize the dispersion of dust through the placement of plant earth screens, maintenance of tree vegetation spots, restoration of the debris and irrigation of tracks.

The activities will not be visible from Cáceres or from the highway to Trujillo; A monitoring program will be followed to ensure the preservation of flora and fauna; The site will occupy a smaller area of ​​the diffusion and the waste will be stacked without the need for rafts to dry the material.