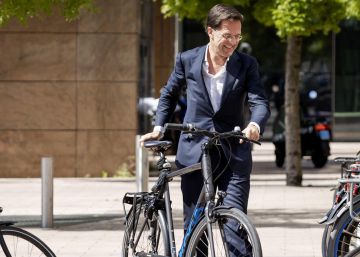 I accept lessons from someone who is virtuous, but from Holland, which has become the greatest European tax haven, I do not accept lessons, it would be missing more. I accept the lessons in German, not in Flemish. Germany is increasingly dominant. Eastern countries are becoming länder. And not by vice, but by virtue of Germany. " This was clearly and emphatically recently published in La Vanguardia Romano Prodi, former President of the European Commission and former Prime Minister of Italy. The tone reveals the satiety of a pro-European with the Dutch Government, who systematically becomes the stick in the wheel for any aid to the countries of southern Europe.

These statements were made before Angela Merkel and Emmanuel Macron, the political leaders of Germany and France, respectively, had reached an agreement that has been the prelude to the Next Generation EU plan, approved by the European Commission on Wednesday. This plan has a budget of 750,000 million, of which 500,000 million would be distributed in a lost fund (it is not necessary to return them) among the countries most affected by the coronavirus.

It is a magnificent plan, of which 140,000 million would touch Spain, with 77,324 million in the form of a subsidy, but the small detail is still missing that to implement it, it needs to be unanimously approved by the 27 members of the Union. Here appear the so-called frugal countries (the Netherlands, Denmark, Sweden and Austria), over which Germany usually has a decisive influence. History reminds us that it has used them as a ram against other countries on many occasions, even that it has invaded them in one morning.

The Netherlands are always the most vocal of this group and that is why Romano Prodi put the spotlight on them, accusing them of being "the largest tax haven in Europe". The numbers have recently been put in by Tax Justice, an activism against tax havens born in the UK in 2002, which published a month ago the report The Axis of Tax Evasion. This axis is made up of Luxembourg, Holland, Switzerland and the United Kingdom, countries that it accuses, in that order, of having a tax scheme that has meant for the rest of the EU losses of 27.6 billion in revenue only with multinationals from the United States operating in Europe.

Google teaches us how simple the mechanism is. The American technology company has in the Netherlands the instrumental Google Netherlands Holding, which is a mere platform to receive payments from Google's subsidiaries in other European countries, not expressly from Google's activity in the Netherlands. These subscriptions are for the royalties that this holding company charges Google in other countries for using the Google brand and technology. Therefore, it is an assembled system for the Dutch screen to take the income from Google's activity in Germany, France, Italy and Spain, for example.

The money route continues to Google Ireland Holdings, which is the company to which Google USA has transferred the rights to its patents and from there to Bermuda, a tax haven, including palm trees, of book: British overseas territory in the middle of the Atlantic North, monitored by Uncle Sam. It is easy to see that from there he returns to California with a ridiculous total taxation.

Why so much trouble? Said in Roman paladin, which the poet Gonzalo de Berceo would say: because this way they earn even more money. In the Netherlands the corporation tax is lower than in the rest of the countries and what they tax to the taxpayers they distribute to the shareholders.

In 2016, Google Holland transferred to Google Bermuda 15.9 billion euros earned in Europe and two years earlier another 11 billion, which is known. All of this is, of course, superlegal. The new masters of the universe, the GAFA (Google, Amazon, Facebook and Apple), use this system intensively, but they are also in the crosshairs of Dutch multinationals (Shell, Philips, Akzo Nobel), Swedes (Ikea), Italians (Fiat) and from all over Europe.

The aforementioned report from Tax Justice indicates that the effective tax rate in the Netherlands for corporation tax is 4.9%, although the official rate is 25%.

Such a low rate justifies that shell companies domiciled in the Netherlands pass through this country about 200,000 million euros a year, of which 60% end up in Bermuda, according to estimates by that organization.

At heart, none of this is new. The Netherlands has been working with tax diplomacy since the middle of the last century and nothing has happened. But everything changes when crises come and resources are lacking. If the Netherlands collects 5% of these flows, it would be entering clean € 10 billion for lending some postal codes to some 15,000 instruments. The problem is that to take that amount, he would be stealing some 40,000 million from his community partners, who disappear through the tulip sink.

This scheme should be prohibited and penalized. Those who defend it argue that if the Netherlands ends this practice, another country will appear to do the same. It is a mafia argument, which you should be ashamed to use. What is clear is that it is in the hands of governments to end such a selfish system.

This practice disables the Netherlands to go through Brussels and Strasbourg giving serious lessons and good management of public finances and accusing the south of napping. The pandemic and its economic consequences are a disgrace, while raising taxes on partner countries is an attitude towards life. That a moderate like Romano Prodi has made such statements is a clear indication that the South is not willing to assume more morality than Calvinist economic supremacism.

The public pension will rise to more than 3,000 euros per month after Escrivá's contributions are unstoppable