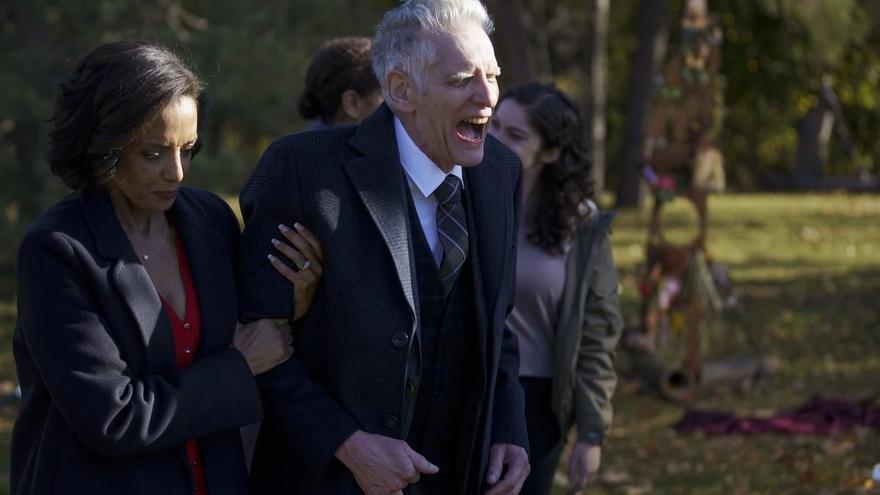 Canadian director David Cronenberg is one of the essential names in contemporary cinema. He’s earned it with visceral fantasies (in more ways than one) of body horror like Chromosome 3 or Videodrome, but also with many other works from a filmography with a few ramifications run through by a recognizable sensibility: Crash, A history of violence, Cosmopolis… Along the way, he has also been an actor in works of fantastic and terrifying genres such as the series Slasher and Star Trek: Discovery or the movies Night races and Jason X.

In October 2019, Cronenberg spoke publicly that he was in pre-production on a series for Netflix. It was rumored that it could be an adaptation of his own novel Consumed. Cronenberg had been struggling for years to finance his projects, to the point that actor Viggo Mortensen had declared that the Canadian filmmaker was considering retirement for that reason. So the approach to the subscription-based audiovisual giant could make some sense. If the big studios did not seem interested, Cronenberg would access the money of a powerful new player in the sector.

The years since then have come to nothing. The author of The fly has declared that those responsible for the platform were scared by the content of the proposal, as reported The Globe and Mail, Cronenberg would have come to write the first two chapters of a serial fiction titled The shrouds, but did not get the green light. Quim Casas, co-author and coordinator of the collective volume David Cronenberg: the mysteries of the organism, was not surprised by the negotiations between Cronenberg and Netflix because the platform “has made other bets of this type, although with debatable results.” The Catalan film critic does appear somewhat perplexed at the end of the project: “I will never understand why a studio, a producer or a network comes into contact with a director with a style and themes as recognizable as Cronenberg and then backs down. What were Netflix executives expecting?Smiles and tears? The same thing happened to David Lynch when ABC rejected Mulholland Drive“.

Just three or four years ago, some voices viewed Netflix as offering remarkable creative freedom, at least relative to other entertainment conglomerates. A short time later, dozens and dozens of Netflix Originals with clonic airs and very attached to generic models have turned the tables. Now the platform is identified with a trend towards the homogenization of forms and narratives, a fast food of the audiovisual. One of the co-producers of Call me by your name, Rodrigo Teixeira, affirmed that the platforms of streaming They had entered a phase of interventionism that brought them closer to the dynamics of large studios. Cronenberg seems to agree: “My experience with them was the same as with studies. They are bright and well versed, they know about things. Inside, they are scared. They tell you they love your job. And when you offer them something, you They say they want to work with you, but not on this. “

In fact, Netflix shows a very free relationship with the idea of ​​originality even in terms of terminology. The teacher and popularizer of fantastic cinema Jordi Sánchez-Navarro signed, together with Antoni Roig and Judith Clarés-Gavilán, the academic article Netflix Original Feature Films: An Analysis of Release Strategies. The text explained that only 33.3% of the feature films released in the 2015-2018 period under the label of “Netflix originals” included production credits for the platform or one of its executives. The brand suggests that the platform has promoted works that, in most cases, are external productions that are often completed before the platform buys the corresponding emission rights. In many cases, Netflix only had broadcasting rights for one or more specific territories, and not for all the countries where it operates.

Among the Netflix production flow, it has been possible to see some somewhat different works or with a certain margin of authorship. Casas sees limits in it: “Martin Scorsese said that no normal studio wanted to pay him the Irish, but what have he or Bong Joon-ho done (Snowpiercer: Snowbreaker) there it does not seem to me the most relevant of them. “The critic believes that the standardization of Netflix content is more pronounced than in other entertainment corporations, but he values ​​that” Netflix produces more cinema, while HBO or Amazon bet more on the series “.

For Elena Neira, author of the book Streaming wars, “unconventional projects like Maniac or I am thinking about ending things they make me believe that the platform does offer room for experimentation. “Another thing is to what extent it is carried out. The creator of it Maniac, Cary Fukunaga, explained to GQ magazine that Netflix executives had discouraged him from incorporating temporary games into an episode of the series so as not to hinder the habit of binge-watching, the time-focused viewing of several episodes that the TV service streaming facilitates (and pursues) by hanging entire seasons of his series.

Fukunaga seemed very open to these interventions. Still, he declared that technology has changed the exchange of notes between creatives and producers: “It’s not like thinking: ‘Let’s debate this and maybe I’ll win.’ In the end, the algorithm argument is going to triumph,” he explained. And this marks a nuance with respect to previous times of struggle between creators and producers. At other times, the authors had to debate with funders armed with their experience, important but also subjective and debatable, or with inevitably limited market research. Now they have on the other side of the table executives armed with vast records of data, who affirm with a supposed objectivity that a specific creative decision will mean the loss of a certain number of viewers.

In Neira’s opinion, “the algorithms cannot tell how to make the program, but they undoubtedly provide guidance on the type of program that should be done to achieve the highest possible efficiency of the investment they are going to make.” In any case, the essayist recalls that “Netflix has said countless times to use data to reverse engineer content that does not work.”

Netflix’s business model, which seeks to keep its subscribers, can qualify the orientation of some products that may be more aimed at satisfying the client by offering works that prioritize the absence of rejection of the stimulus of taste. It is not an exceptional phenomenon: the big Hollywood studios, like Disney or Warner, also seem very oriented to satisfy rather than to seduce. After all, they turn their efforts into serialized film franchises that aspire to turn the viewer into a kind of captive consumer. All in all, the moviegoer must be convinced anew to spend their money on a new entry. The subscription service, in contrast, can focus on keeping the customer.

Neira defends that Netflix “does not give a stitch without a thread” and that it is based on an encyclopedic knowledge of the tastes of its audience. At the same time, it considers that “these systems that are determined to satisfy the preferences of the clients eliminating the discordant notes of the equation do not feed the discovery and, in the long term, I do not believe that it is positive for the clients”. The author of Streaming wars recalls that “all companies claim that they try to combine both lines of content, satisfaction and experimentation; probably Cronenberg was more in the line of experimentation.”

At the moment, the author of Crash has managed to finance a new feature film, Crimes of the future, repeating the multinational co-production model that already served him to carry out Cosmopolis or Maps to the stars. Finally, the fans of the Canadian director will be able to enjoy (or suffer joyfully) another feature film signed by him. Again, without the intervention of the old big studios converted into entertainment conglomerates, and also without the participation of the new Goliaths of digital audiovisuals.