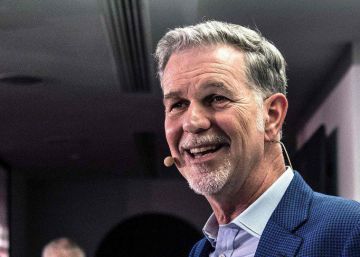 In a rare outburst of sincerity, Netflix CEO Reed Hastings has acknowledged this week that the arrival of Disney +, on November 12, at the war of streaming in the United States it has hurt its platform.

Netflix added 420,000 new users in the United States during the last three months of 2019, below the 600,000 that the company expected to reach, as revealed by the company defending, on Tuesday, its results for that period of time. On the other hand, the Mickey mouse platform, on its first day of existence, had added 10 million users. A report by the sensor company Sensor Tower says that Disney + has reached 41 million subscribers since its launch, which is almost 25% of Netflix's global audience.

The bump of the company at home is offset by the good data it has reached abroad in the same period of time: 8.4 million new subscribers, well above the seven million they had marked in their forecasts. Total platform users worldwide are already 167.1 million. However, it remains to be seen to what extent that figure resists the impending international expansion of Disney +: its arrival in the United Kingdom, France, Germany, Italy, Austria, Switzerland, Ireland and Spain will happen on March 24. Other markets in Europe, such as Belgium, the Nordic countries and Portugal, will have it in the summer.

In the coming months, the market of streaming in the United States it will continue to mutate repeatedly. In 2020 the services of NBCUniversal, Peacock will arrive on the game board (it comes with the returns from Saved by the Bell Y Punk Brewster); AT&T's, HBO Max (will premiere series of Dune, Grease, Gossip Girl Y Americanah, the Chimamanda Ngozi Adichie novel), and the Quibi video platform (with a Spielberg horror series, another based on Brett Easton Ellis novels and a new The fugitive), which will cause a couple of earthquakes on the American board. The Netflix forecast for the first quarter of 2020 is to achieve seven million new users worldwide, below the 9.6 million added last year on those same dates.

The platform also announced on Tuesday a change in the way it tells the viewings of its content. Until now, he counted as spectators those accounts that had seen at least 70% of a series or a movie. Now, it will count as a viewer any reproduction of at least two minutes of its content. So, the first season of the fantasy series The Witcher has been view (that is, they have reproduced at least two minutes of a chapter) by 76 million households in their first four weeks. The platform recognizes that this technique inflates the data, but ensures that it is a fairer way to measure it: it treats short and long-term formats in the same way.