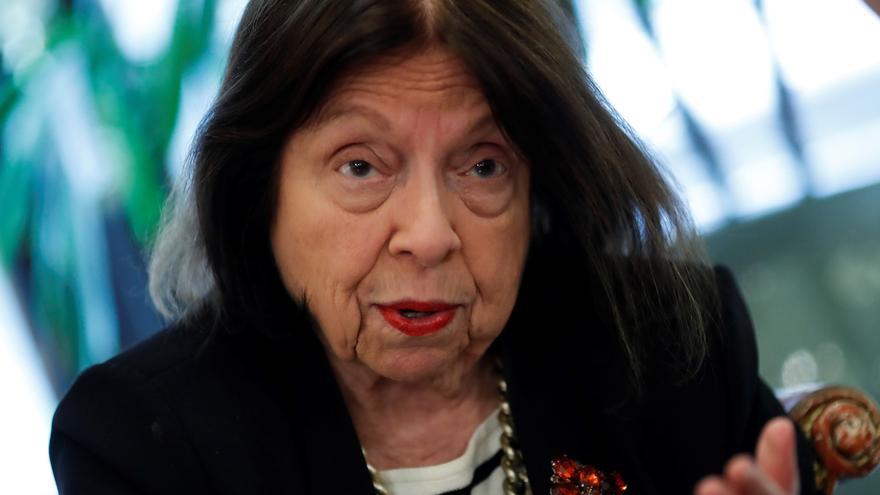 Rio de Janeiro, Mar 25 (EFE) .- Brazilian writer Nélida Piñón affirmed this Thursday that literature is for the strong, recalling the difficulties she faced due to her status as a woman and protester since the publication of her first work 60 years ago .

“I suffered a lot because they tried to block me” and that is why “I consider that literature is for the strong,” said Piñón, Prince of Asturias Award winner (2005) and the first woman to preside over the Brazilian Academy of Letters, in a virtual event in commemoration of 60 years since the publication of “Gabriel Arcángel’s Map-Guide”.

The 86-year-old writer, born in Rio de Janeiro and from a Galician immigrant family, stated that since the publication of her first work she perceived how “the system was cruel” and said she wants to report it now to encourage young writers to do not allow yourself to be buried by critics.

His message was transmitted in a virtual meeting on “60 years of the profession of a wandering heart” organized by the Cervantes Institute in the framework of the commemorations of its thirtieth anniversary and by the Federal University of Rio de Janeiro (UFRJ).

“The publication of my first work caused a lot of positive and negative reaction, because they said that I was very hermetic. I perceived that the system was very cruel and that it did not allow a critic to understand what a girl wanted to express, especially because I did not She was a woman of “literary groups,” said the author of works such as “The Republic of Dreams” (1984) and “The sweet song of Cayetana” (1987).

“But in these 60 years I did not accept spurious condemnations, and that makes a huge difference, especially if you are a woman. I suffered a lot because they tried to block me. There was a critic who for a year wrote terrible sentences against me and repeated that Nélida was not read Pinion, “he said.

The writer, who last October published her latest novel, “Um dia chegarei a Sagres” (“One day I will arrive in Sagres”), assured that she wants to remember these events now to serve as an example to young writers.

“Literature is for the strong, for those who manage to survive and resist maintaining their integrity. Today I have to say those things to strengthen those writers who were buried and so that one day they may appear,” he said.

Piñón suggested that the Cervantes Institute publish a series with great writers, mostly women, who are excellent but who were “buried” by the system.

“Each book of mine was a challenge. I was branded a rebel because the protagonist of my first work was a woman who did not accept the notions of sin that were imposed on her. It was a revolutionary book. But it progressed and I think that in these 60 years each book it was a different provocation, “he said.

Piñón affirmed that the situation she experienced cannot be compared with that of women trying to become writers at this time, as they now enjoy “the wonderful conquests achieved by feminists in recent decades.”

He claimed that he was fortunate that the originals of his first work were read by two of the greatest figures in Portuguese-language literature, Clarice Lispector and Rachel de Queiroz, which allowed him to ignore the criticism.

She added that she discovered her vocation as a child and that her training as a writer contributed to the fact that she was a descendant of Galician immigrants, that she felt a foreigner, and that she had been interested in both the culture of Galicia and that of Spain.

“I think that very few people in Brazil had the life that I had. First, because I was born in a family outside of Brazil, so I always considered that my grandmother’s sighs had traces of sadness, and my grandfather’s energy was of someone who brought a legacy from Spain, “he said.

“That took me one day, with that notion of being a foreigner, in the best sense, to be capable of remarkable estrangements for a girl. Because estrangements enrich,” said the novelist, who highlighted the lessons she obtained during the two years of her life. youth in which he lived in Spain, especially in small Galician villages.

“It was an extraordinary learning. My imagination, which was already powerful, flourished. And in 60 years I understood that the imagination is extinguished, that it dies if one does not spend a lifetime feeding it. And I was feeding that imagination in that Spain, where I spoke Spanish and Galician, and in which I traveled through the times, because I lived with troubadours as if they were my friends, “he said.