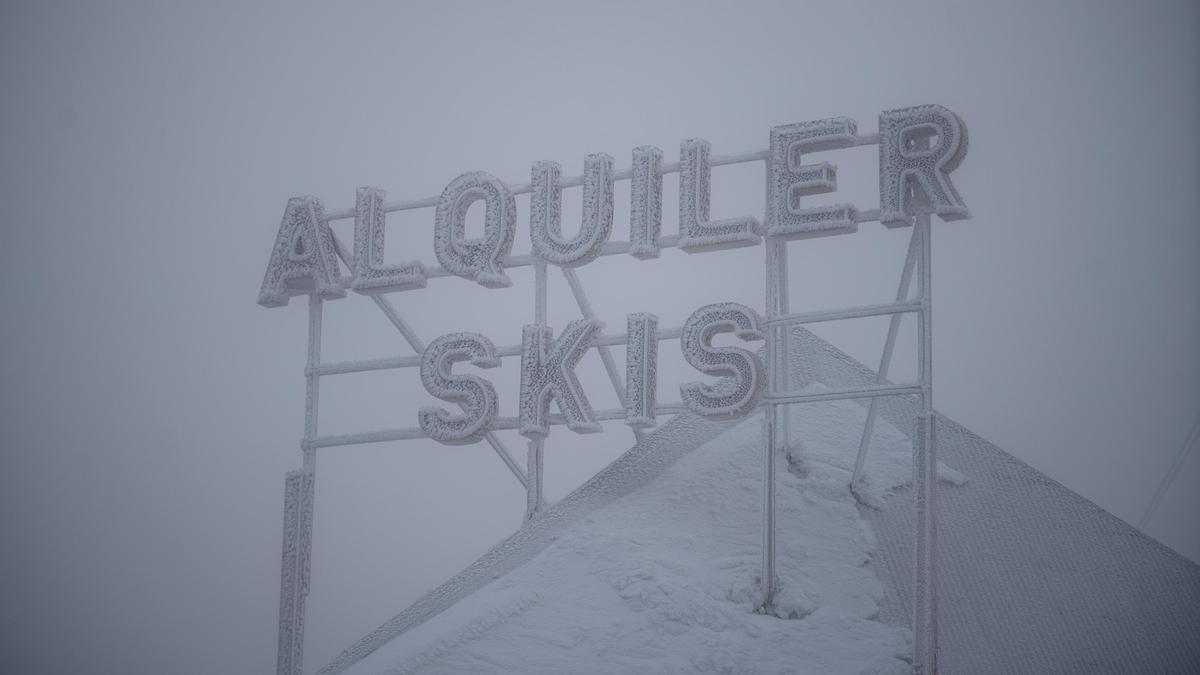 It is 8:50 in the morning in Navacerrada, between Madrid and Segovia, the thermometer on the door of Venta Arias shows -3º and gusts of wind of 75 kilometers per hour hit the port. The pen, frozen, refuses to write on the notebook. There are ten minutes to go until the theoretical reopening of the ski resort declared in absentia since last year and in the macro-parking there are only a handful of cars. Visibility is zero at more than 50 meters and the only souls in sight are a Telemadrid reporter and her camera fighting with the blizzard.

Navacerrada has not opened this Friday due to bad weather and, according to the forecasts and some workers fear, it does not look like it will do so in the next few days. The first battle for the Navacerrada ski resort, which the Ministry of Ecological Transition has ordered to close but the autonomous governments of the PP of Castilla y León and Madrid defend keeping open Although the land belongs to the Government and the concession has expired, the storm has won it.

There was expectation with what could happen this December 3 in the ski resort after the fight between the central Executive and the regional governments, but finally nothing happened. The National Parks Agency, dependent on the Ministry of Ecological Transition (MITECO) and owner of the mountain on which the station stands, decided last March that it would not renew the 25-year concession signed in 1996 that allowed the station to operate before "the a serious problem of saturation and access "which represents a high-value area that fills up with visitors on weekends to the point of, on occasions, forming kilometer-long traffic jams from early in the morning on the road leading to the port.

From the first moment, the MITECO met with opposition from regional presidents Alfonso Fernández Mañueco and Isabel Díaz Ayuso, who joined the battle although it is fought over the Pinar de Valsaín, in Castilian-Leon lands. The Madrid side of the station, which is halfway between both autonomies, also has the concession expired for two years, but in this case the land belongs to the Community and on this part there is no dispute.

For the Ministry, the occupation is illegal, so it asked the Justice not to allow the station to open. But the court rejected the extremely precautionary measures that the Government had requested - it saw no urgency to close facilities that have been open for decades - while deciding on the merits of the matter.

The few station workers who show up on this frigid morning are angry at the Ministry's decision, although they decline to make many statements because they have been asked to keep quiet. "I only know how to fix chair lifts, what am I going to do if we close? Am I going to the Pyrenees?" Exposes his frustration an operator, who tells that they had a meeting with Minister Teresa Ribera from which they left without solutions. On the track of the Telegraph, one of the three on the Segovian side to be closed, the lifts move empty while another worker removes the accumulated snow, which threatens to damage the structure due to the weight. The canyons, without which the slopes are unviable due to the increasing lack of natural snow, do their job while waiting for customers.

At the foot of the slopes, José Conesa, partner and spokesperson for the ski resort, attends to the press present at the port. "We are cautious, Justice has to speak," he begins, and insists on the idea that the company has been defending since April: "We have only received a letter without a signature" communicating the closure, a notification that they do not consider binding. The Ministry denies this version, maintains that the closure has been duly communicated. For Conesa, the least of the port's saturation problems is the ski resort: "The problem with traffic jams is not due to the season, we have about 300 or 400 skiers on a good day out of the 10,000 visitors that can come."

At his side, Julio Vias, an environmentalist and member of the Sierra Norte de Guadarrama Natural Park Board of Trustees, listens carefully but rejects his arguments. "The station has caused enormous damage to the environment, the scars on the Guarramillas slopes are very visible, they have destroyed the vegetation, buried cables, surrounded the place with a fence to prevent the wind from sweeping the snow, which has a great landscape impact. There are concrete pylons in the middle of the mountain of old abandoned ski lifts that were never removed ... ", he enumerates. "That is the direct damage, the indirect one is the overcrowding, which although it is not only their responsibility means thousands of cars emitting CO2 into the atmosphere. Not to mention that the station is not viable, in recent years they have opened on average ten days per season due to lack of snow ", repeats an argument that MITECO has used to deny the renewal of the license.

Opinions are divided among the few hikers who show up as the morning progresses. Gonzalo, a man from Madrid who carries his skis on his shoulders as he goes on foot to the Guarramillas hill (popularly known as the Ball of the World) to practice mountain skiing, explains that he is favorable to the closure "due to the crowds" and, although he understands the anger of the workers - some thirty, according to the company -, maintains that "to make an omelette you have to break eggs."

On the other side of the port, along the track that leads to the popular Schmidt path that runs to the Fuenfría port, Concepción is in favor of keeping the station open because it "gives life to the port." She is a hiker, she does not ski, but assures that the facilities do not bother her, although she admits that in the 30 years she has been visiting Navacerrada, the tourist pressure has increased, "especially since Decathlon popularized mountain sports." Gonzalo and Concepción, unintentionally, serve as spokespersons for the two views on this controversy, and the arguments they use will be repeated indistinctly by other mountaineers who approach Navacerrada as the morning progresses.

The Navacerrada ski resort is located on both sides of the port of the same name, which separates the provinces of Madrid and Segovia in the Sierra de Guadarrama. This "no place", as Julio Vias describes it, endorsing a term coined by the North American geographer James Howard Kunstler, has been a place of passage since at least the 13th century, explains this expert in the area. It was at the beginning of the century when it began to gain popularity as a place of leisure and excursions, and in 1920 the Government granted a license to the so-called Union of Initiatives of Guadarrama, which would be converted into an Anonymous Society of the Guadarrama Electric Railroad, on the land to build " high-altitude sanatoriums "for tuberculosis patients, which was quickly forgotten to plan the construction of houses. In 1923, the inauguration of the railroad in the port opened the door to mass tourism in the Sierra de Guadarrama.

"What came next would exceed all expectations," explains Vias as he looks around. The buildings multiplied: hotels, housing blocks and the first ski lifts were erected for skiing in the 1950s, which redoubled the pressure on the port. The 60s and 70s marked the time of maximum activity for the ski resort, and in the 80s the port could receive 20,000 people on a good day.

The improvement in communications led to the transfer of many tourists to other areas, and the pressure on Navacerrada was falling. The place is today an amalgam of abandoned buildings, in ruins and full of graffiti, eaten by snow and ice those that have not been bricked up. Some have also collapsed on the very slow road to recovery in the area. Among those still standing, there are many "for sale" signs.

Even so, today, a good winter weekend, between 8,000 and 10,000 people gather in the place. The station spokesperson insists that skiing is not guilty of saturation and maintains that its main value is "the possibility of initiation in winter sports" for children, and that between 9,000 and 15,000 minors attend each year. learn their tracks.

The company has asked for the concession to be extended by two years to compensate for the two lost seasons due to the pandemic, but has not received a response so far. The Junta de Castilla y León declared itself not competent, explains Conesa, and passed the ball to National Parks, which did the same to the Ministry of Ecological Transition. MITECO's deadline to reply ended this Friday, but at the moment the company has not obtained a response, although given the decision taken last March, it can be guessed in which direction it will go.

Back in Madrid, Vias remembers that in the nearby Puerto de los Cotos, just six kilometers from Navacerrada, there was also a ski resort until not so long ago. But in 1999 it was decided to dismantle it. "It was a performance that marked a milestone throughout Europe in terms of restoring degraded natural areas", explains the expert. Nobody who is unaware of the existence of this station would be able to say today that there were three buildings and 11 ski lifts on that mountain 22 years ago. The dismantling was not done without controversy, Vias recalls, nor will Navacerrada close, if it closes, without making noise. "But even today the restoration of Preserves generates employment in the area," the environmentalist closes positively.