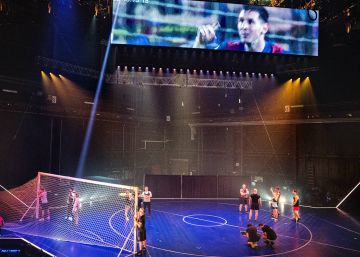 Messi does not like watching his matches too much, nor does he recreate much with the images of his goals except for the one he scored in the final of the Champions at the Olympic Stadium in Rome in 2009, when on his flight, after nodding the ball, he dropped the boot of his right leg while leaving Van der Saar, the Manchester United goalkeeper open-mouthed, the team then Cristiano Ronaldo.

Although football has not always gotten along with the performing arts, mostly because the best of the shows will hardly overcome the excitement of a live match, there are plays and also players who pay for the poetic vein, especially in a passionate club like Barça. Perhaps one of the riskiest bets was Foot-Ball dance by Cesc Gelabert. Until Le Cirque de Soleil has arrived to worship Messi.

The famous circus company risks even at times losing its nature card to turn the 10 into a God. The exercise is titanic and may even blush Messi himself. The footballer corresponded to flattery when he went out to applaud the interpreters at the end of the premiere held Thursday at the Parc del Fórum de Barcelona. Although irregular, the show is recreated in the interpretation of Messi's universe.

Starting from the figure of the referee as a common thread, the winks of football are used, few as recognizable as the wave, the spontaneous and lately the VAR, to often express with the help of a video marker the virtues and abilities of Messi Acrobats and contortionists honor the world's best footballer with great rhythm and exquisite technique, the number 1 leading 10.

Although the dribble, the change of pace and the pass frequency of Messi are inimitable, Le Cirque du Soleil take advantage of the soloist condition of 10 to offer a number that makes the impossible possible, as with the contortionist who plays with his body as if it were rubber, or if you want a Rubik's cube, a way to ridicule injuries and also to gloss Messi's invulnerability.

Easier is the approach to the striker in the ball games or in the celebration of goals and on the other hand very difficult and achieved is the moment when Messi becomes the Lion King. At times it seems that plot or story is missing and instead at times the deconstruction of the character is meritorious and very well underlined with phrases such as: "There is only one way to stop Messi: the pause." Surely he liked 10.

Soccer, bread and circus has already gone down in history; Today it is the circus that folds to Messi to also honor Barça. Everything is impregnated by the fragrance of 10. There are those who have a dedicated ode (Platko), also a poet like Comadira glosó a Guardiola; there are many songs dedicated to players; and you could write a book about the relationship of jazz with football and Barça. Messi has managed to have Cirque du Soleil at his feet.

Although it is not properly circus or Messi at stake, Messi10 Cirque du Soleil is the never seen and, as such, you have to see it to worship even more at 10 and wish that Circ de Soleil is again Cirque de Soleil .