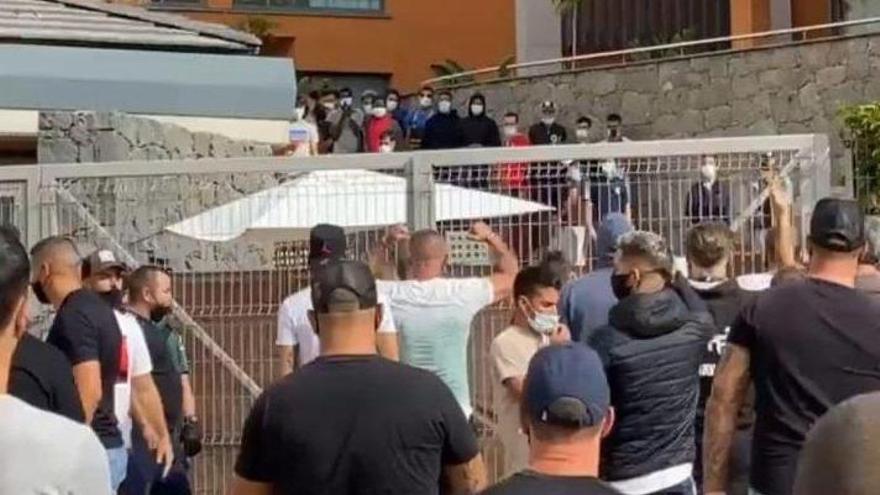 Dozens of residents of the Gran Canaria municipality of Mogán have gathered this Saturday at the doors of the hotels that host migrants to scold them: "Out, abusers!" The Arguineguín Neighborhood Platform has boasted on its Facebook account of "taking charge of the problem" and "standing up to immigrants." Thus, some residents of the municipality that Onalia Bueno (Ciuca) manages, have gone to the call center where people who arrived in Gran Canaria by boat come to speak with their families. The Local Police has explained to Canary Islands Now that, in order to avoid incidents, the agents have traveled to this point. The Civil Guard has also gone to the doors of the hotels where the migrants are "to avoid possible disturbances of public order or other types of possible criminal acts." However, there has been no arrest or administrative complaint. The Government Delegation assures that it knows nothing of the matter.

The PSOE of Mogán has spoken on its social networks and has made a call for calm and understanding. "Violence can never be the solution to any problem." The former councilor of the City Council and regional deputy Pino González has regretted in statements offered to this newspaper the "provocations towards migrants" that the youth of the municipality have starred this morning. Likewise, it affirms that the political use of the migratory crisis and the speeches of some administrations inciting the mobilization have brought "serious consequences". González points to the mayor, Onalia Bueno, as one of those responsible for the unrest and xenophobia that has been established in the south of the island against vulnerable people and criticizes his "double talk". "At first he made us believe that he was defending human rights, but now he is issuing an ultimatum to vacate migrant hotels," he says.

Well, investigated for an alleged buying of votes in the municipal elections of 2015 and 2019, threatened to open disciplinary proceedings against hotel establishments if they continued to give up their spaces for humanitarian purposes as of December 31. However, the Migration Minister himself, José Luis Escrivá, already assured during his visit to the Canary Islands that before the end of the year all the people staying in tourist complexes would be relocated in seven camps distributed throughout the Archipelago with a capacity of 7,000 beds. Escrivá explained that the hotels had been a temporary solution given the increase in arrivals by sea and the insufficient reception resources in the autonomous community.

The Minister of Social Rights, Noemí Santana (Podemos), called the mayor's speech "xenophobic and quasi-fascist." Given this, Bueno reacted by ordering the inspection of two apartment complexes that take in unaccompanied foreign minors, a responsibility of the Santana management area.

The president of Vox, Santiago Abascal, has also visited the Canary Islands in recent weeks to participate in demonstrations that link the decline in tourism in the Islands with immigration. Its purpose: to know "first-hand" the "concerns of the canaries in the face of the avalanche of illegals that have attacked our coasts and that put the canaries' way of life at risk". The president of the Canarian Confederation of Entrepreneurs (CCE), Agustín Manrique de Lara, has denied that allocating hotels and apartments to humanitarian actions has caused losses in the sector: "It has nothing to do with it. The fall is due to the lack of flow tourist by the pandemic ".

During the 2006 cayuco crisis, the Canary Islands received 31,678 migrants. That same year, 10.3 million tourists came to the islands according to data from Promotor, the public tourism company of the Government of the Canary Islands. This figure dismantles what Vox has tried to uphold in its visits to Gran Canaria, Tenerife and Lanzarote, stating that irregular immigration "destroys" the image of the region.

The far-right party has tried to champion the anti-immigration discourse in the Archipelago to scratch the notoriety that it did not reach at the polls in the last elections. Abascal's party has no representation in any of the Canary Islands administrations. Neither in the autonomous Parliament, nor in the seven island councils and neither in any of the 88 municipalities. It only has two of the 52 deputies that the party has in Congress, one for each province.