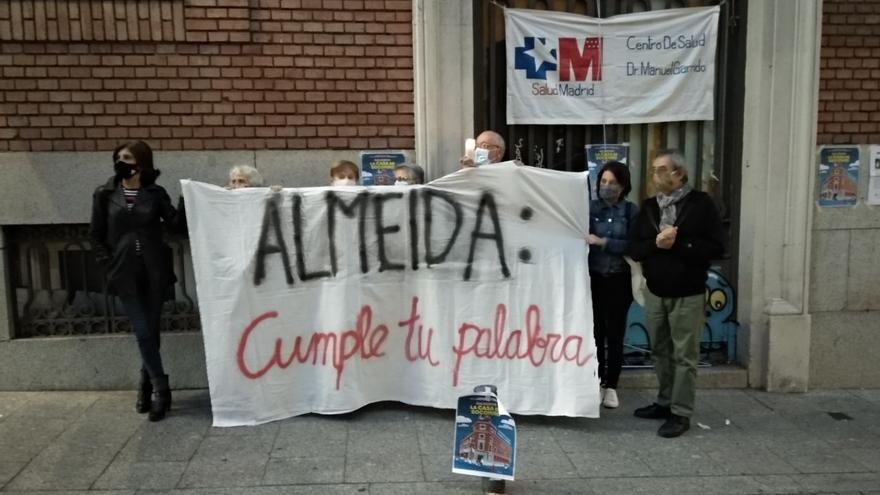 Dr. Manuel Garrido, 47, had been a primary care doctor for years at the Alameda Health Center, in the center of Madrid, when he was infected with Covid. He did not resist the disease. On April 21, he died, in the middle of the first wave of the pandemic. Almost six months later, some 200 of his patients and neighbors from the Cortes neighborhood paid tribute to him today in an act that was also vindictive: the symbolic inauguration of a new health center in the Paseo del Prado 30 building, where the social center was located. La Ingobernable, closed by Mayor Jose Luis Martínez-Almeida, who promised to use the property for sanitary use. Then he gave up and opted for a museum. Today it is neither one nor the other.

Attendees gathered in front of the health center this afternoon, placed candles on the bollards in the street and showed a banner with the message: “Almeida, keep your word.” Later they advanced the scarce 100 meters that separate the door of the ambulatory of the building today without use. “They have never given us the building as unfit,” Carmen Abad, a doctor at the center and former partner of the honoree, recalled before those present, who lost her voice when remembering it. “We have been demanding a change of space for many years because it does not meet the conditions either to work for us or to attend to you as patients, since it does not have an elevator, the offices do not have windows and it is not very accessible. Unfortunately, they have ignored us on many occasions ”, he criticized.

La Ingobernable had not been used for years when it was squatted as a social center. Ana Botella had given the space to the Ambasz foundation to make an architecture museum, a project that did not prosper. With Manuela Carmena, tolerant of squatting, the property was recovered for the municipality, after payment of a millionaire compensation to the foundation. Then Almeida made the eviction one of the reasons for his campaign for mayor. Once completed, he launched a plan to turn it into a Jewish museum through another foundation, linked to former mayor Alberto Ruiz Gallardón, which came to nothing. Meanwhile, residents continue to insist that the best use is the toilet, which would require a change in the urban plan.

“We have gathered more than 3,000 signatures and we want to reach 21,000, which would be as many as residents are assigned to the health center,” explained Sara Robles, from the neighborhood association of the Sol y Letras neighborhood, who, along with other residents, attends a day a week – first on Mondays, now on Thursdays – to the place to applaud the deceased doctor. Now they fear that the closure of the Alameda center will mean that they will be displaced to a more distant one, such as Arganzuela.

On the esplanade in front of the deserted building, the neighbors stood at white painted marks on the ground to respect the safety distance. In addition to the doctor Carmen Abad, the former vice president of the Center’s Local Forum, ‘Casa’ Revilla, or Rosa Baras, responsible for the campaign to collect signatures, took the floor to claim the medical center. Also the socialist councilor for the central district Maite Pachecho and the municipal spokesperson of Más Madrid, Rita Maestre, whose formations go hand in hand on this matter.

The movement is adding supporters, some recent, such as José, who only found out on Saturday that he could be referred to another health center, and was a bit skeptical about the possibilities of success: “Unity is strength, but if Almeida He says that you have to remove it to see who can beat it. Enrique, 73 years old and “very bad milk”, regretted that the conversion of the building into a health center was not addressed during the previous government. “I don’t want to poison myself, but this could be done when Carmena,” he said. Next week there will be concentration again; Neighbors and political opposition promise to keep fighting.