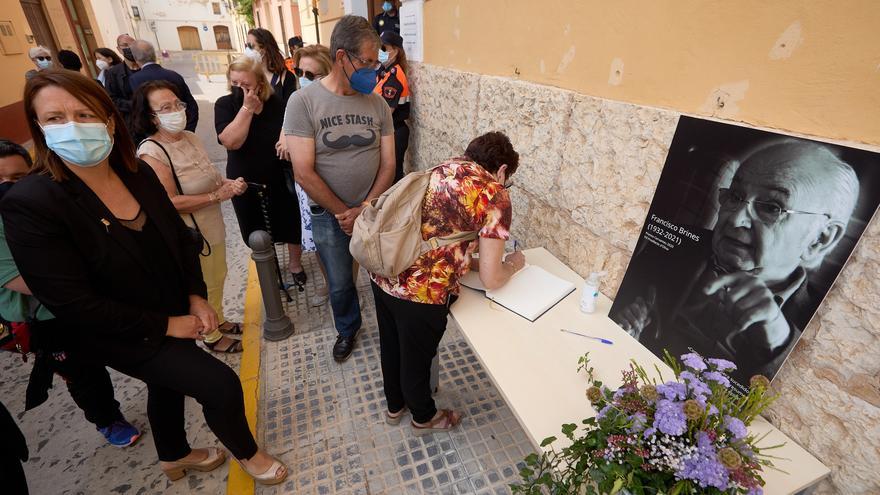 Oliva (Valencia), May 22 (EFE) .- Friends, neighbors and personalities from the world of culture have fired this Saturday the writer Francisco Brines, who died last Thursday at the age of 89, in his hometown of Oliva (Valencia ) and have agreed to highlight “his humility, his goodness” and above all “his generosity”.

The hearse with the poet’s coffin has arrived at Oliva Town Hall after 10 in the morning, coming from Elca, the family estate and residence of the writer in the last 25 years, where an hour before a small group of people, including his friend the writer Fernando Delgado, the actress Rosana Pastor and the members of the Francisco Brines Foundation have paid him an intimate and emotional tribute.

The consistory, which has declared three days of official mourning for the death of its “most universal and illustrious” neighbor, Cervantes 2020 Prize, has installed a burning chapel in the plenary hall in which the closed coffin has been placed, with a great photo of the poet in his home in Elca and a book of condolences in which neighbors and friends have written a few words of memory to the writer.

The Minister of Culture and Sports, José Manuel Rodríguez Uribes, has gone to the burning chapel at noon to convey the Government’s condolences to the family and has stated that with the death of Francisco Brines “we lose one of our great universal poets” , that it is necessary to “vindicate, honor and remember”.

One of the first to arrive was Vicent Todolí, former director of the Tata Modern in London and artistic director of the Pirelli HangarBicocca in Milan, who highlighted from the poet, of whom he was a personal friend, that “his words surpassed his writing” and his poetry “surfed between the horizon and the earth, between light and darkness and between reality and memory.”

The actress Rosana Pastor received the news of Brines’s death when she was conducting interviews in Madrid for a documentary she is preparing about the writer, which will be broadcast on the “Essentials” program on La 2 de TVE. He has also had the privilege of “enjoying his humor and his intelligence” and has highlighted “the unanimous feeling of love for Paco and his dedication to friendship.”

The writer and general director of Culture and Heritage of the Valencian Generalitat, Carmen Amoraga, has highlighted the poet’s “generosity, which will accompany us throughout life”, and the memory that he always had for his parents, who encouraged him to write , of those who sought his recognition, which has now had it “from the whole world.”

The director of the Instituto Cervantes, the poet and essayist Luis García Montero and personal friend of Brines, with whom he shared hours and trips in search of books, has agreed that “along with the poetry teacher was the generous person” with the rest of the authors , especially with the youngest, “and hence many poets have lost a friend.”

The general director of the Book and Promotion of Reading, María José Gálvez, the writers Carlos Marzal, Vicente Gallego, the artist Carmen Calvo and the restorer Pilar Roig, among other representatives of culture, have also visited the burning chapel.

Dozens of Oliva residents have approached from early in the morning to say goodbye to the writer, including Amparo Porta, whose family was very close to Brines because they lived on the same street. “We all knew him, we loved him, you could find him in any store in town, he would talk to everyone and he was always very grateful,” he recalled.

One of the poet’s nephews, Juan Porta, has pointed out that in the last days of lucidity Brines said goodbye to his loved ones and has ended his days “happy and proud” and surrounded by books, with which he even slept to have them at hand .

Àngels Gregori, writer and director of the Francisco Brines Foundation, lamented that with the death of the poet, the legacy of Cervantes, his donation to the Casa de las Letras, has remained pending, in an act that was scheduled to be held in Elca on June 14 , and his latest book, “Where Death Dies,” which he was reviewing.

The mayor of Oliva, David González, has reported that the exhibition dedicated to him at the Cervantes Institute in Alcalá de Henares (Madrid) is scheduled to arrive in Oliva next July, and the council has proposed to the Generalitat to install a sculpture in his memory on Francisco Brines avenue in the city.

The Minister of Culture, Vicent Marzà, has also visited the burning chapel and has announced that the Valencian Government will expand its support for the foundation to spread its legacy more widely and “be more universal, if possible.”

The chapel will close its doors at 5:45 p.m. and a response will be held at 6:00 p.m. in the church of Santa María in the municipality.

The coffin will be transferred tomorrow to the Palau de la Generalitat de Valencia, where a burning chapel will be installed, which will remain open from 10 a.m. to 1 p.m.

The writer will later be buried in the Valencia cemetery, where the family pantheon with the remains of his parents is located.