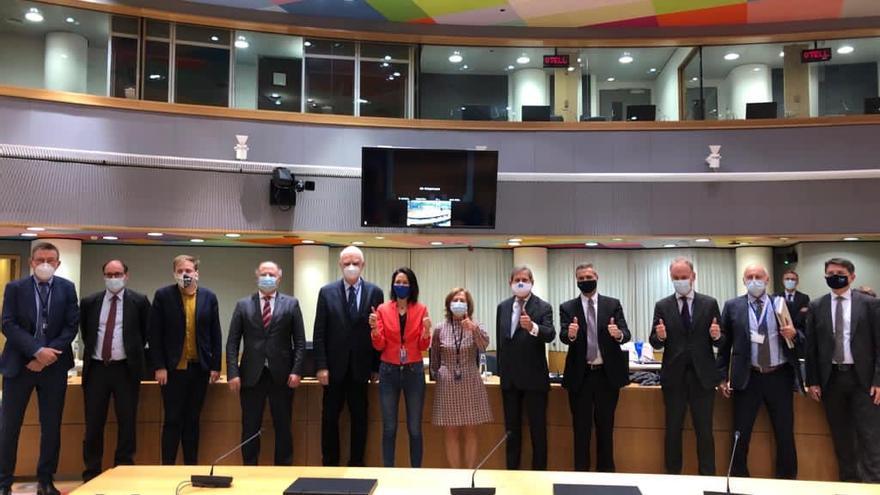 Less is left. The negotiators of the European Parliament, the German presidency of the Council of the EU and the European Commission have reached an agreement this Tuesday on the Multiannual Financial Framework, the EU budget for 2021-2027 of 1,074 billion euros, in the that the recovery fund of 750,000 million is inserted. The groups of the European Parliament denounced that the items of the multi-year budget that the heads of Government emptied in July (culture, cohesion, Erasmus, Horizon, Invest EU …) had to be reinforced, and the negotiation has lasted for several weeks. Finally, this Tuesday an agreement was reached with the relocation of 16,000 million euros.

According to the note released by the popular Europeans, there are “16 billion euros more for the flagship EU programs in research, health, Erasmus, protection of external borders, investments, neighborhood policy, humanitarian aid, projects of civil society and culture “, according to Jan Olbrycht MEP and speaker.

“Negotiations with Parliament have taken time,” said the German ambassador to the EU, Michael Clauss, “but we have finally succeeded: we have reached a political agreement on the final details of the next long-term EU budget. This is a well-balanced agreement, addressing the issues raised by Parliament while respecting the guidance received from the European Council in July. We are now in a position to take the next crucial steps in the process: present the different parts of the package to member states and Parliament for approval. ”

“Europe has been severely affected by the second wave of the coronavirus pandemic,” Clauss said: “We urgently need the recovery fund to be operational to cushion the dire economic consequences of the pandemic. I hope everyone understands the urgency of the situation and now help pave the way for the rapid implementation of the EU budget and the recovery package – no one needs new obstacles and more delays. ”

The European Commissioner for Budgets, Johannes Hahn, said: “The EU has demonstrated its capacity to act by ensuring the vital and urgent support that businesses, citizens and regions need in this unprecedented crisis.”

This agreement comes after five days ago another knot was unblocked, that of linking European funds with compliance with the rule of law. The agreement represents a certain advance on the timid proposal of the German rotating presidency, which limited responsibility for compliance with the rule of law to the management of European money. In other words, Poland could continue decreeing LGTBi-free zones and Hungary continue expelling migrants in any way and continue to receive European money.

A text has emerged from the negotiations that allows unlocking a negotiation in which the European Parliament wanted to go further, and clears the way for the implementation of the recovery funds pending whether the Hungarian Government reaches the end in his threat to block parliamentary ratification and thus the entire fund in retaliation.

For now as published by Politico, Hungarian Prime Minister Viktor Orbán has threatened to block the recovery package and the EU budget over the agreement to link payments of the funds to respect for the rule of law.In a letter to the President of the European Council, Charles Michel, seen by Politico, Orbán has said that last Thursday’s agreement between the negotiators of the three main EU institutions does not meet the criteria set by Budapest.

“In accordance with the agreed practice according to which nothing is agreed until everything is agreed, I must inform you that the situation leaves Hungary no choice but not to accept the other elements of the package at the next MFF. [Marco Financiero Plurianual, el presupuesto de siete años de la UE] and the coronavirus recovery fund, including matters requiring unanimity [la aprobación de recursos propios y el nuevo techo de gasto]Orbán wrote to Michel.

Once these two nodes have been cleared, two other negotiations remain open: on equity (the new taxes for debt repayment) and the one that will begin in mid-November on the regulation of the recovery fund.

The pending negotiation of own resources has to do with the taxes that the EU wants to implement to face the repayment of the 750,000 million debt that the European Commission will issue to finance the recovery funds. That negotiation should come to fruition, although there are issues that have to be closed, such as the start-up date of some taxes, such as financial transactions, which the Council set for 2026 and the European Parliament wants it sooner.

And the last pending is the regulation of the recovery fund. This Monday, the economic affairs and budgets committees of the European Parliament have decided on the regulation – 73 votes in favor, 11 against and 15 abstentions – to allocate the 672.5 billion euros of emergency funds for the recovery of the coronavirus. The regulation has been endorsed by the groups of the EPP, S&D, Renew (liberals), Greens and United Left (GUE), and calls for, compared to the proposal of the EU Council (the 27 governments), more green investments (of the 37% to 40% and aligned with the guidelines of the community taxonomy that establishes which investments are green and which are not), introduce the gender perspective and eliminate the suspension clause in the delivery of funds if the fiscal regulations of debt and deficit targets that, on the other hand, are suspended during 2020 and at least 2021.

After passing the passage by committee, a final vote is expected in the middle of the month during the plenary session of the European Parliament as a preliminary step for the negotiation with the Council.

The agreement of the European Parliament establishes a spending target of at least 40% linked to biodiversity and the fight against climate change – the agreement of the governments sets it at 37% -, ensures that 100% of everyone’s money national recovery and resilience plans are spent on the priorities identified in this regulation by Parliament; that Parliament should have the right to approve national recovery and resilience plans; assessment of the impact on gender equality in full recovery packages; and that the specific recommendations for each country should be those that are in line with the priorities of the regulation. Finally, Article 9 on the link between the fund and the obligation to comply with European tax rules was deleted and replaced by a review mechanism whereby the Commission is charged with presenting a new legislative proposal on how to articulate the Regulation with the fiscal rules once the general safeguard clause of the Stability Pact is abolished.