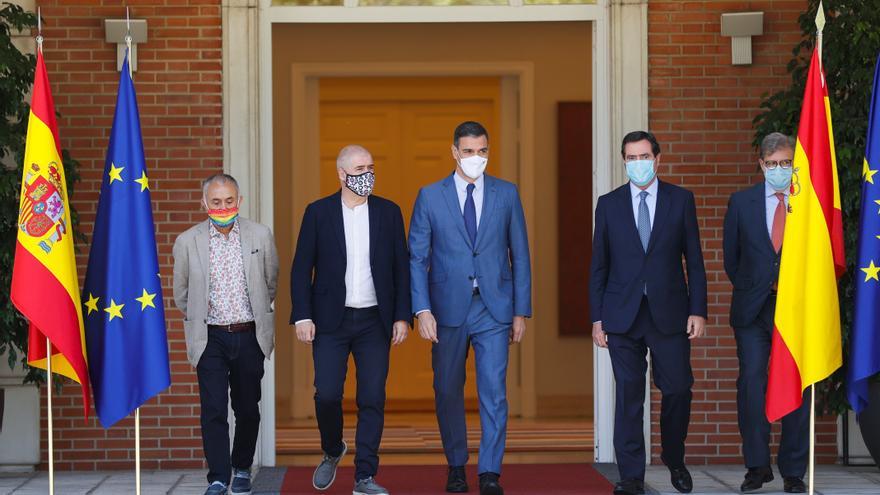 Without having left behind the pandemic that came to paralyze the world, on February 24 the advance to "normality" after COVID was dynamited. President Putin ordered the invasion of Ukraine, which has unleashed a war within Europe that very few expected. Along with the humanitarian drama for the Ukrainian population, the consequences of the conflict go much further and will touch the pockets of companies and workers in many countries. Also in Spain. The President of the Government, Pedro Sánchez, has defended a "great income pact" to face and mitigate the negative consequences, where the rise in prices is placed as the main risk. This great agreement reaches employers and unions, but also public administrations.

"I'm going to be frank," Sánchez warned Wednesday in Congress. "The measures that we have adopted and those that we may adopt in the future within the EU and NATO will have a cost and will require sacrifices," said the president about the response to the invasion of Ukraine by Putin. . Although for some the conflict may seem distant, the war has touched Europe and this will have an impact on the Spanish economy. Not only with macroeconomic effects, warned the leader of the Executive in Parliament, "it will logically have an impact on the economy of families" and companies.

Although the damages are yet to be determined, they are already taken for granted. "There may be a slowdown in the recovery and a clear impact on prices," said the economic vice president, Nadia Calviño, on Thursday. for now, the expected moderation of prices in spring is already considered lost and the effect on trade relations with Ukraine and Russia is also clear, although in Spain they are not very relevant. “Lower investments” are also expected, Pedro Sánchez said, at a time when the economy is still recovering from the COVID crisis.

What does this "great income pact" that the president urges mean in practice? Pedro Sánchez gave some general lines in his appearance.

The first summoned to this damage distribution agreement are the social agents: the majority unions and employers. The Government asks them to reach an agreement in the AENC (Collective Bargaining Agreement and for Employment), a state-level roadmap for sectoral negotiations and in companies on key labor issues. Salary increases concentrate all eyes and this Thursday, in the first technical meeting between CEOE, Cepyme, CCOO and UGT they have been confirmed as the "main stumbling block" in the negotiation.

Pedro Sánchez demanded on Wednesday that the two parties, companies and workers, once again reach an agreement as they have done on numerous occasions during the pandemic. The "great income pact" supposes that they agree and both make "sacrifices". Both on the side of "salary costs", the president pointed out, which is understood as lower increases in remuneration than desired, and through "the moderation of margins and profits of companies". All this to "avoid falling into an inflationary spiral, which undermines the purchasing power of families and savers and puts economic recovery at risk."

The salary agreement was already relevant given the context of high inflation that has been dragging on since last year. But, now that the conflict in Ukraine poses yet another risk in this regard, so the pact in the AENC seems key. This is how they consider it in the Government, both in public, through statements by the president and the economic ministers, as well as in private. Members of the Executive are urging the social agents to reach a state pact as a fundamental tool to give "stability" and "confidence" to companies and workers in these uncertain times.

The Government, like the rest of the national and European institutions, has already given up defending a "transitory" inflation caused by the escalation of energy. In the first place, because the impact of the war in Ukraine on the prices of raw materials, and mainly on oil and gas, denies a moderation in the advances of recent months. It even points to new highs, such as have already been seen these days.

And second, because the greatest advances are not concentrated only in the most volatile elements of the basket of products and services with which the CPI is calculated, precisely energy and also food. is already appearing the risk of a price-wage spiralwith the danger of ending in stagflation, inflation without economic growth, or even in a process of hyperinflation and recession in an extreme scenario.

A threat, also known as "second-round inflation", difficult to foresee at this time, in which the high level of uncertainty makes it impossible to measure the consequences of the war, but which, according to economic theory, could cause significant damage to activity: from the loss of purchasing power in the pursuit of wages at prices, the uncontrolled increase in public spending and indebtedness, the deterioration of the competitiveness of Spanish companies abroad, even the shortage of certain products and supply cuts.

"The inflation of goods and services and the growth of wages can feed off each other," reflects the team of analysts at BBVA Research. And that, they add "has important implications for other macroeconomic variables, such as household welfare, business competitiveness or debt levels in real terms." Of course, these economists recognize that, despite the strong growth in year-on-year inflation at the end of 2021, "salary moderation has been the guideline during the past year, helped by the behavior of both price and salary margins", which that they consider "a relief" when it comes to avoiding second-round effects.

From the economic cabinets of the CCOO and UGT unions they emphasize that the priority is to address the main focus of inflation, the market for setting energy prices. In this sense, the Spanish Government adds support in the crusade that he has been waging for months to try to force a reform of the electricity price formation system and unhook it from natural gas. It is true that the war in Ukraine now broadens the focus, but the unions warn that wages are falling off the hook, with the negative repercussions that this may have for domestic consumption, which must also be protected against an international crisis. They also consider that the increase in prices is now falling mostly on "the shoulders of the workers", so they ask that companies do their part with a cut in their benefits. "An income pact cannot consist of measures that are only effective in containing wages," warned the leader of the CCOO, Unai Sordo, on Thursday.

This same week the CPI data for February was known, with a growth of 7.4% compared to the same month of the previous year, above forecasts and registering a record in 33 years. Along the same lines, the PMI report -advance index of activity according to business surveys- for February of the services sector in Spain shows an all-time high in prices charged, as the same indicator had previously pointed out for the manufacturing sector. And that's not even including the impact of the war in Ukraine, since the survey was conducted between February 10 and 23.

"The latest data indicated that operating costs [de las empresas] increased at a slightly lower rate than the record in the study recorded in November last year and respondents reported that many expenses increased, including costs related to staff, energy, fuel and supplies in general," explains IHS Markit, which build the indicator.

Sánchez's "great income pact" also has a third leg, which involves public administrations. To everyone's money as a "shield" to protect "the most vulnerable", said the president, as he reiterated that the Government has done in the last two years since the COVID broke out in Spain. Since these people are always more exposed to crises, as has been seen again in the pandemicthis "income agreement" should also mean greater protection from the public for this group.

The president announced the extension of measures dependent on the central Executive, such as the electricity social bond until June 30, of the reduced rates for energy and announced that during 2022 the tolls for the electro-intensive industry will be reduced. In addition, Pedro Sánchez announced that it is planned to deploy the new ERTE of the labor reform, the Red Mechanism, for companies and workers that may be affected by the consequences of the war.

But the president also "invited" other public administrations to act in their fields of competence to protect those who are most exposed to instabilities. He summoned the Autonomous Communities and local entities to "redouble efforts in assisting the most vulnerable groups and to adopt additional social measures that allow improving and guaranteeing the conditions to confront this shock in families", among other measures. The "great income pact", Pedro Sánchez insisted, should be a "country pact", which requires unity of action by political and social actors.