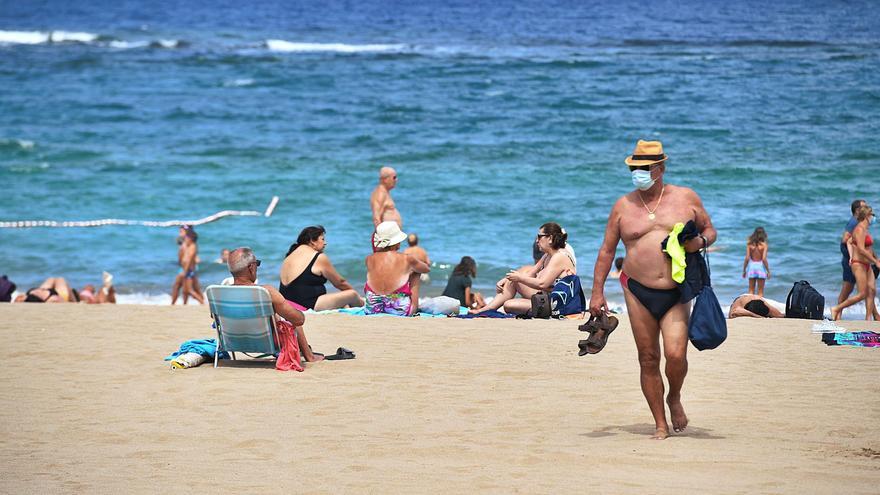 The canaries will have to present a negative test, either PCR or antigen test, to be able to travel between islands during the Easter and the next, that is, from the 00.00 hours from March 26 to midnight on April 9. In this new restriction, imposed for the first time among residents, those canaries who travel for a just cause, such as going to the doctor, attending classes, working or returning home, will be exempt. This decision, taken in the Governing Council, is related to with the perimeter closure that will be implemented in each of the islands facing this holiday period, at a time when more exhaustive controls will also be carried out in ports and airports of the Islands. The performance of these diagnostic tests, however, will not be subsidized by the Government of the Canary Islands, as they have been so far for national travelers. The peninsular, however, and following the restrictions imposed in the rest of the country, will only be able to travel for the same justified reasons.

In addition to the perimeter closure, during Easter, which will not affect foreigners who may continue to come with a negative PCR, the population will have to meet in groups of maximum four people in closed and open public spaces regardless of the level at which the island is framed. In the private sphere, only cohabitants may meet. The curfew is established at 10 p.m. on all the islands, except those that are in level 1 (El Hierro, La Palma and La Gomera), in which the night circulation limitation will begin at 23.00. In the hotel industry on all the islands, off-table and bar consumption will be prohibited.

In addition, the alcohol service can only be done once the table is assigned. During this time, actions that lead to a violation of current sanitary restrictions, that is, crowds, remove the mask or not keep the safety distance may not be carried out. In these cases there are dances, karaoke, parties, concerts or any event that invites you to sing or dance. On levels 1 and 2 –the latter also includes Lanzarote– the maximum occupancy of tables both indoors and outdoors will be four people. Nor will processions and other worship events that may produce crowds be allowed. The festivals and popular festivals will continue to be banned, as they have been up to now.

The restrictions for Easter overlap with those that the Canary Islands Government has had to take as a result of the worsening epidemiological situation in Tenerife, Gran Canaria and Fuerteventura. The three islands will pass this same Monday at level 3, which means that the interior of the restoration is closed again and that the perimeter closure will begin on these islands that same day, yes, even without the possibility of justifying the trip with a negative test.

They do so after having passed only a week ago at reinforced level 2, in a movement of the Government of the Canary Islands to try to avoid the closure of the islands for Easter, given that any measure that would lead to an increase in restrictions it would have to remain in effect for at least the next 15 days. In the end, the epidemiological reality has prevailed and the growth of cases in recent days has finally forced the closure of the 3 islands, except for justifiable reasons. In fact, the rest of the restrictions to which they will be subject are similar to those imposed by the reinforced level 2, including the limitation of groups (4 people) and the curfew (from 10 p.m. to 6 a.m.). However, for this occasion the Government of the Canary Islands has decided to open its hand in two aspects: gyms and home delivery. The first ones will be able to open despite the increase in level, with a 33% capacity, maintaining all security measures and in groups of maximum 4 people with the monitor. In the case of restoration, the Government will allow home delivery until midnight, which will allow businesses to make a profit despite the earlier closing.

“In the last two weeks, Tenerife has been rising steadily and continuously,” said the Minister of Health, Blas Trujillo, in a press conference after the Governing Council. In this sense, the counselor recalled that the island has three indicators at a level that corresponds to a high risk, among them is the cumulative incidence at 14 and 7 days and ICU occupancy, which stands at 16 %.

“The pressure has been oscillating,” explained the counselor who remarked that the situation “worries” but remarked that there is still movement capacity because there are “phases of the contingency plan that we have not yet had to activate.” There are currently 224 hospitalized people on the island, of which 35 are occupying a critical bed. It should be noted that during the epidemic wave in December, Tenerife had a maximum peak number of 290 patients admitted at the same time. For the moment, the record of hospitalizations that occurred during the first wave of the coronavirus pandemic has not been exceeded. In this sense, one of the most worrying indicators is the incidence of cases in people over 65 years of age, given that they are the most likely to have to be hospitalized due to a worsening of their pathology. The island has been growing at a rate of between 13% and 30% weekly for the last week.

Fuerteventura has also been included in this list, given that in the last week it has accumulated almost a hundred new cases. “The trend is important and we see that many of its indicators are at a high risk level if not very high,” said the counselor. “The assistance pressure on the island has caused the contingency plan to be activated and it worries us,” Trujillo insisted. As of yesterday, there were 11 people hospitalized on the island, according to data provided by the Ministry of Health.

The base situation of Gran Canaria is somewhat better. Although it is not in the most optimal epidemiological condition, the increase in cases is slower, more sustained and “muffled” than in the other two islands. However, the Governing Council has also decided to include it at level 3 as part of its “anticipation strategy”. It should be noted that their healthcare pressure continues to decrease and 130 people are currently hospitalized on the island.