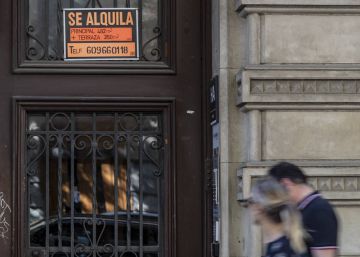 Nearly four out of ten Spaniards, 37.7% specifically, agree to put limits on rental prices, according to the Center for Sociological Research (CIS). The July CIS barometer, published this Wednesday, devotes specific sections to housing questions. Among others, it asks the respondents (the sample was 2,974 people) to say whether they believe that having decent housing is a right that must be actively protected by the Government. 90.2% of respondents answered affirmatively to that question, compared to 6.2% who do so negatively.

The survey then asked those who had answered affirmatively to say by what means politicians should protect those rights. As responses, several non-exclusive options were proposed; that is, each person could say with how many of those possible solutions he agreed with. The one that generated the greatest consensus (52.2%) was to build social housing for people with few economic resources. They follow the one of giving cheap loans to buy houses (49.9%), to foment the construction of house with accessible prices for the middle class (46.9%), make a policy of limiting the price of rents (41.8%), create a sufficient public park for rental housing (38.3%) and socialize the land so as not to increase the price (31.4%).

These percentages refer only to people who shared the claim that housing is a right that the Government must protect. When accounting for the total sample of the survey, slightly lower. For example, those who support the limits on rental income are 41.8% of the former, but on the group of respondents they represent 37.7%.

Regardless of this issue, the CIS also asked about the form of ownership of the house where the respondents lived and what their desire would be in this regard. From these variables, it can be seen that 18.4% of Spaniards already live in rent. The percentage does not stop growing for 10 years, since before the bursting of the bubble it narrowly surpassed 14% according to the INE. However, rent as an ideal way of life is only the best option for 12.9% of the participants in the study, compared to 81.8% who prefer to buy their own home and 3.5% who declared that They are indifferent.

The fault of this mismatch between those who actually live on rent and those who have it as their favorite option is fundamentally the purchase prices. Almost 6 out of 10 tenants surveyed said so, determining that the main reason for leasing was the lack of sufficient income to buy (45%) or that it was considered a temporary solution to be able to buy (14.9% ). These percentages refer only to people living for rent, so we must bear in mind that the sample is relatively small in this case (282 people).

More than two thirds of respondents (66.4%) agree or strongly agree with the generic claim that buying is always better than renting and 59.7% believe that buying a home is the best way to save for the future. Regarding the advantages of the lease, 75.4% share the idea that it gives more freedom of movement and 64% that allows to have a more adequate housing at each vital moment.

For more than half of the respondents, 51.6% rents are expensive or very expensive. 23.9% consider them adjusted. That percentage rises a little, to 27.4%, among those who believe that prices remain stable. 47.7% believe that they are going up something or a lot. For 1.5% they are lowering something or much. The cause of the most cited shortage is speculation: 35% of those who believe that rents are becoming more expensive cited it as the first or second reason (the survey allows only two causes to be mentioned). The explanation follows that it is due to the fact that the purchase prices of flats also rise (33.9%). In third place is the scarcity of flats for rent in the market. This is believed by 32.7% of respondents, although as the first reason is the most repeated (21.9%).

In addition, the survey asks about the attitudes of Spaniards to squatting. 39% believe that those who squat in a house should be immediately expelled, compared to 31.3% who believe that alternative housing solutions should be sought and 22.7% who are committed to dialogue with the squatters until solutions are found. The CIS also asks the respondents if they know someone who has been squatted in a house after leaving for a vacation for a few days or for another reason: 18.9% answered that they did know something like that. Given this specific situation, the percentage of those who think that the eviction should be immediate rises to 57.8%, while 27.3% is committed to giving a maximum period of 48 hours from the complaint. Those were the only options offered by the study, which also includes 8.2% of people who gave "another response".

As for the rehabilitation of housing, 87.4% of respondents are in favor of the administrations promote policies aimed at this. For the majority, 52.3% must be done giving aid to pay part of the works. 47.7% are in favor of giving cheap credits for this type of work. Less than three out of ten respondents pointed out as other possible ways (the answer to this question was also multiple) that of establishing tax deductions or direct promotion of rehabilitation works.