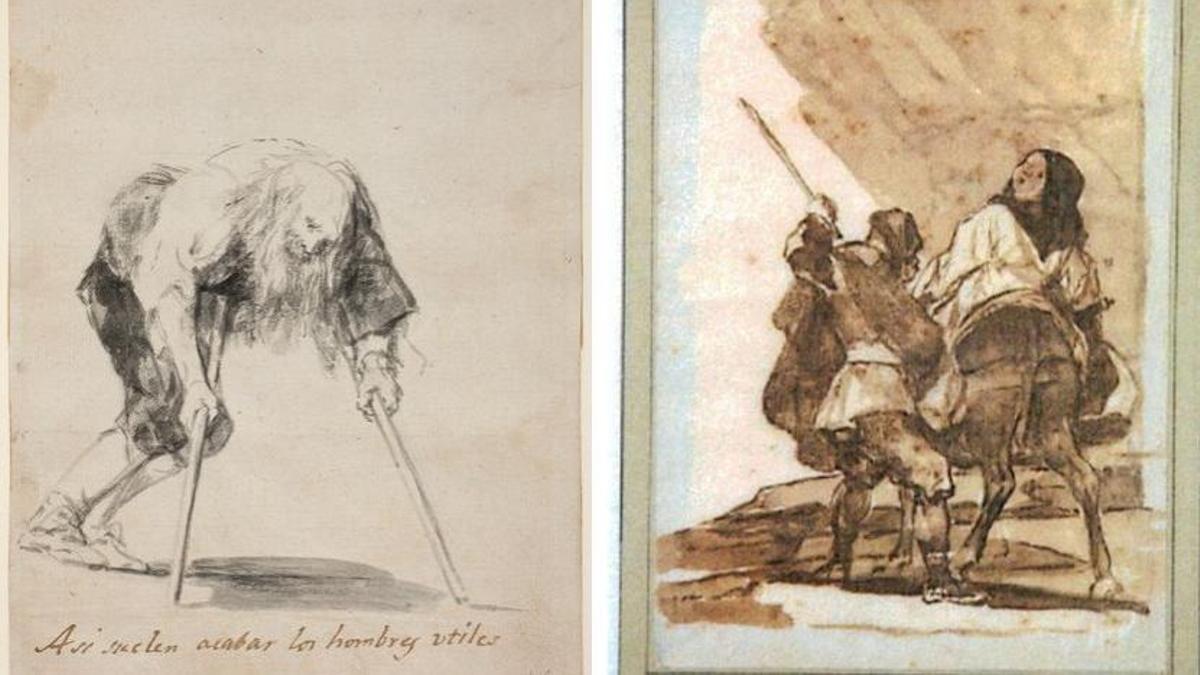 Two hundred years ago Spain did not pay the bills either. The consequences of the invasion and the war against Napoleon's forces (1808-1904) left the country mortally wounded. To the collapse of the agricultural and livestock economic system it was necessary to add the poverty of the citizens, the considerable damage caused, the growth of mortality and the municipal coffers to zero. These were not good times, not even for the renowned painter Francisco de Goya, who saw his main clients disappear from the public scene: Carlos IV abdicated and Manuel Godoy, the second most powerful man of the moment, renounced everything.

Goya never lost his position as a court painter, he never ceased to be the artist closest to power, he never rebelled against those who facilitated his privileges, but neither did he look the other way. In his privacy he drew against the unbearable. Ignorance and barbarism. In the last years of the war he did not have quality paper to continue doing it and he used what he had at his fingertips. One day they were loose sheets from a notarial registry book, another day some sheets from a clerk's album. Whatever. Today we would call it "first world problems". The same thing happened with ink: he used iron gall, the same one he used to write, but he applied it with a brush. Cheap inks and papers for those who liked to ride a carriage.

Time, much more exquisite than the author, has been primed with the areas where the painter loaded more ink to portray scenes of misery, violence and tragedy. With reality he was inspired and with imagination he betrayed it. Goya was not a photojournalist, although he did nothing more than observe and reflect. And take notes. First discord: did you use Goya notebooks or were they loose leaves? Jesusa Vega, a professor at the Autonomous University of Madrid and the greatest specialist in the Aragonese painter, indicates that it is not known whether in Goya's life the drawings were bound or in folders. That is why she does not call them "notebooks", she prefers to refer to this set of drawings as albums, respecting the different conditions of the series. José Manuel Matilla, head of the Conservation of Drawings and Prints at the Museo Nacional del Prado, opts for the idea of ​​"notebooks".

Perhaps one day this question will be resolved. For now, we know that Javier Goya inherited in 1828 all the drawings that his father had made in eight albums ... or notebooks. And he put them back together and rearranged them into three volumes. Perhaps to put them up for sale, although they never got rid of them.

José de la Mano, gallery owner and art historian who has researched the fortunes of albums and drawings for four years, will publish his findings in two weeks in a book entitled The legacy of Javier Goya. His father's drawing albums. "Javier had no intention of selling. The use he makes of those albums is for preservation and to make his father's drawing facet known to anyone who passed by. He didn't want to sell at all. He just wanted to keep" , clarifies this newspaper. He says that not all were notebooks, that some were loose leaves. "Especially album C", which corresponds to the years 1812-1820. That is why Javier organized it into three albums.

It was Mariano who turned on the machine for the sale of his grandfather's thousand drawings. In the first months of 1856 he sold the three albums to a "consortium" made up of the collector Valentín Carderera and the painter and director of the Prado Museum Federico de Madrazo y Román Garreta, who sold one of the albums to the Prado in 1866. Until That year, a thousand drawings could have remained in Spain, but the new owners had no intention of benefiting from a market without funds like the Spanish one. The dispersal begins with Carderera selling his share to the British Museum. José de la Mano tells that Federico de Madrazo reorganizes the album that corresponds to him in four and pastes the drawings on pink paper.

Federico keeps one, he gives two to his children and another to his daughter, Cecilia, married to the painter Mariano Fortuny, who sells it to the Metropolitan Museum (MET) in New York. Federico sells his lot to his disciple Bernardino Montañés, the latter to the painter Aureliano de Beruete, who sells it to a German industrialist. In World War II those 30 drawings disappeared, says José de la Mano. All were given up for lost until in the nineties a curator of the Hermitage Museum in Saint Petersburg found them in the funds of the Russian art gallery. "Undoubtedly it is heritage stolen from Germans," says De la Mano.

The operation that interests us today is the one that was carried out with the greatest obscurantism. On April 3, 1877, the auction of more than a hundred of Goya's drawings took place at the Hotel Drouot in Paris. The two lots of the two sons of Federico. They never admitted having taken them out of Spain fleeing from the reales, in search of collectors with francs. When the Madrazo family was asked where these drawings were, they did not say that 30 years earlier they had been sold in France. José de la Mano is convinced that this commercial move was illegal. An outing similar to the one Jaime Botín did with his Woman's headby Picasso.

The banker was caught red-handed. To the Madrazo, no. De la Mano has found excellent documentation in which it is clarified that they used a figurehead to avoid staining themselves. A certain Paul Lebas appears, "a screen agent to leave no trace," explains the specialist. "It was such a dark movement that we do not know if the person who traveled and sold was Raimundo. But the drawings were not worth much money. At that time they were not large amounts like now, because there was no market for Goya's drawing although he was already an artist recognized in France, "says De la Mano, who does acknowledge that it was much more money than the artists would have made if they had sold them in Spain.

This is what happened 144 years later to the owners of one of those drawings that the Madrazos sold illegally in Paris and that the Ministry of Culture just bought for the Prado Museum to preserve. The family had an offer from a British collector that was close to a million euros for that drawing in notebook "C", but in 1995 the drawing was protected as an Asset of Cultural Interest (BIC). That is why it has never been able to leave Spain in search of a much more powerful buyer. This Friday the BOE has published the purchase of On voyage for 237,100 euros. The Madrazos sold this drawing for the equivalent of 30 euros, at the Parisian auction in 1877. The Prado will keep it together with the half a thousand drawings it has managed to collect over the years. Almost half of all Goya drawings that were disseminated throughout the world.

The gallery owner Guillermo de Osma has been the intermediary of the operation. He received the lawyer of María Rosario Solchaga, widow of Alberto Huarte Myers, heir to the art collection, who died in 2011 at the age of 84, a member of the Los Iruña'ko group and promoter of karate in Navarra. A century and a half after leaving Spain, an aristocratic carambola has brought the drawing to public collections, after the Montpensier family joined the Valdeterrazo family in 1921. The belongings of the French lineage returned to the peninsula and remained in the hands of the Huarte family. The family already sold two other drawings from the "E" notebook in 2007 (Who will win? Y Rigor is not always good).

The gallery owner tells this newspaper that once the millionaire offer from the United Kingdom was rejected, he made a first round of calls in search of a Spanish buyer. He had to lower his claims. The new amount attracted a collector and Guillermo de Osma reported the imminent sale to the Ministry of Culture, which exercised its right of first refusal and bought the sheet for almost 240,000 euros. "A very attractive amount," says De Osma, who this year has sold the controversial Prado Museum for 70,000 euros Young man with cap, painting by María Blanchard. José de la Mano agrees: "The price is a gift."

José Manuel Matilla maintains that the importance of this piece from notebook "C" is due to the fact that it is part of a very personal world of Goya, which was never made to be shown. Despite not being public, they do have a critical, ironic and satirical view of reality, there are also traditional notes and other topics that interested him. Goya never stopped drawing, but he never did it on the street. The romantic idea of ​​the painter stopping before some disaster to take notes is unthinkable in this thousand drawings, applied with quick washings but thought on the desktop. "That is why this acquisition is important, because it is a way of approaching that intimacy little by little. Goya's drawings are the great patrimony of the Prado Museum, there is no other public institution in the world that in the last 20 years has been able to acquire six drawings by Goya or keep half a thousand of them ", adds José Manuel Matilla. Another success of the Historical Heritage Law, which so much displeases the owners of the works.