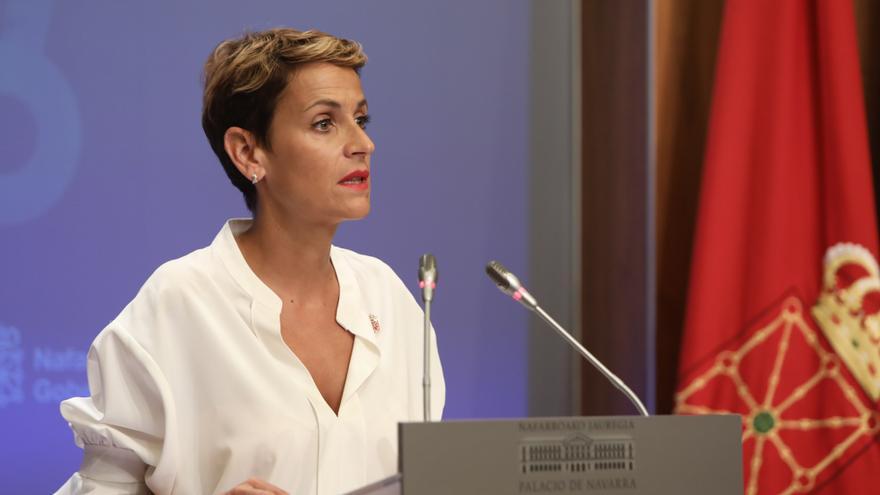 The president of Navarra, María Chivite, announced this Sunday that during the next 14 days more severe restrictive measures will be applied in Navarra to try to “flatten the curve” of infections, which in the last two days has registered historical highs, with more than 400 cases. As anticipated by elDiario.es, the latest data and the fact that the healthcare pressure that is beginning to strain Osasunbidea (the Navarre Health Service) have led the Regional Executive to announce in the middle of the bridge, new restrictions that were not foreseen, among which for the moment There is no perimeter confinement of Pamplona or the whole of the Community, although “it is recommended to reduce mobility as much as possible”. Thus, the measures include the closure of the hotel industry at 10:00 p.m. and a limit of capacity to 30% inside the establishments and 50% on terraces. The meetings are also reduced to six people.

“We have to go one step further because the data is not going well,” said the president, who pointed out that the measures are aimed at “improving the situation in areas with more cases” and avoiding the need “to take tougher measures “. “We do not contemplate for now the restriction of mobility, but it is not ruled out that it is necessary to apply the closure of a city if the incidence continues to be high.”

These measures, which are very similar to those applied in those municipalities with the highest cumulative incidence, restrict capacity at social and family gatherings and hours in the hotel industry, since as explained by the president “where most of the of contagions “. Thus, the maximum number of people who can meet both in the private and public areas is limited to six, where it was already in force in terraces and hospitality. It also includes the closure of catering establishments at 10 pm, where the bar service is abolished and capacity is limited to 30% inside the establishments and 50% on terraces.

In commercial spaces and hypermarkets the capacity is reduced to 40% and customers will not be allowed to stay in common areas, except for mere transit between commercial establishments, and recreational areas, such as playgrounds or similar, must be closed. or other rest areas. The hospitality premises of the commercial parks will be governed by the rules established for the activity of the sector.

The concentration of people in funerals and wakes is also restricted to 25 people in open spaces and 10 in closed spaces. The nuptial celebrations, communions, baptisms, confirmations and other social, family, religious or civil celebrations or other meeting groups, which may take place after the ceremony in hotel and restaurant establishments will respect the general measures of interpersonal security, and in any case , the separation of 1.5 meters, not exceeding in any case the 12 people inside and 18 outside. The use of dance floors or space enabled for their use will not be allowed. For its part, attendance at places of worship may not exceed 30% of its maximum allowed capacity, and in any case, 2.25 square meters per user must be met. Singing is not allowed either.

Are you joining the change of elDiario.es in Navarra? We need your support to continue developing quality content. You can register as a member or, if you already are, From your personal panel you can dedicate part of the quota specifically to your closest edition, to that of Navarra. Now we need you more than ever.

To stay by your side, we have an alert system in Telegram with the latest informative hour and our best topics and you can also find us at Twitter Y Facebook.