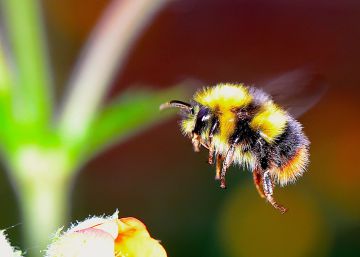 In 30 years, more than half of the world's population will suffer the consequences of a badly injured nature. An extensive study has modeled what different ecosystems and biological processes offer humans today and what they can give them in 2050. For various reasons, most anthropogenic, natural processes such as crop pollination or water renewal will reduce their contribution to human well-being The worst part will be taken by regions that today have more natural capital, such as Africa and much of Asia.

The authors of the research determined the natural contribution of the various ecosystems to three key processes for humans: pollination by insects and birds, the regeneration of water by removing excess nitrogen from livestock and agriculture or agriculture. protection that various natural barriers give on the coastline. "Nature offers much more to humans, in a previous work we propose 18 large families of natural contributions, but there is no data for all of them and for the entire planet, "says researcher Ikerbasque in the Basque Center for Climate Change (BC3) and co-author of the study, Unai Pascual, to explain the choice of these three contributions.

They overlapped those data with those of the current population and that planned in 2050 at the local level. The model also included the various factors that are most deteriorating nature, such as changes in land use in the form of deforestation and agricultural progress, accelerated urbanization or climate change. Finally, they applied their model to three possible scenarios: one in which societies will continue to be based on the use of fossil fuels as now, another emerging that they called regional rivalry and a third party starring sustainability.

The job, published in Science, concludes that, in the worst case scenario, up to 4,450 million people could have problems with water quality due to the inability of different ecosystems to regenerate it. In addition, almost 5,000 million humans will have to endure a significant decline in crop yields due to poor pollination.

The worst results do not occur in the scenario where oil (and CO emissions2) are the basis of the system, but in the new regional rivalry. "It is in a block generation scenario, where international trade is regionalized, something we are already seeing with Brexit or Trump," says Pascual, who is also co-chair of the IPBES Nature Values ​​Assessment report (Intergovernmental Platform on Biodiversity and Ecosystem Services). In this panorama of nationalization of globalization, the increase in population will intensify the pressure on the resources that nature can offer in many regions of the planet.

Only a commitment to a sustainable trajectory could reduce the number of people affected by the deterioration of ecosystems between three and ten times. However, regardless of the scenario that occurs within 30 years, some 500 million inhabitants of the coastal areas will have a greater risk of coastal erosion or flooding.

The work, which has resulted in a powerful visual tool of the Natural Capital Project, lets know who will lose the most. Up to 2.5 billion people in East and South Asia and another 1,100 in Africa will suffer a reduction in the quality of their water. Coastal risks will be concentrated in southern and northern Asia. Meanwhile, the biggest problems with natural pollination will have them again in Southeast Asia and Africa, but also in Europe and Latin America. In both regions the affected people could approach 900 million.

"Developing countries, which were already socially and economically disadvantaged, had the supposed advantages of greater natural capital, but this is where it degrades most rapidly," says Pascual.

Although technology has been supplying a growing number of services that nature previously provided, this time may not be the answer. "If we refer to technologies such as those that completely replace the contributions of nature, such as manual pollination of crops they do in China, or water treatment plants to remove nitrogen, or the development of solid structures to protect the costs, I do not think they are a solution, "explains in an email the researcher of the National Autonomous University of Mexico (UNAM), Patricia Balvanera, not related to the study.

Specializing in the interrelationship between biodiversity and human well-being, Balvanera explains: "They are not solutions, on the one hand, because they do not fulfill all the functions that nature fulfills. Having vegetation along the rivers or the edges of the lakes does not It only contributes to the retention of nitrogen, but also contributes to the infiltration of water, to pumping water into the atmosphere, as well as being a suitable place for recreation, the same with mangroves, reefs, seagrasses. coastal protection, but they are the nurseries of fish and therefore contribute to the regulation of fisheries. "

The concentration of the greatest losses of natural capital in the poorest areas revealed by the study also makes the technological commitment unfeasible. This is what the Mexican researcher argues: "It is unrealistic that Madagascar can invest in expensive constructions for coastal protection. It is not realistic that India could put hundreds or thousands of water treatment plants. Nor is it realistic that China compensates for all pollination. with manual work. "

More realistic seems to conserve biodiversity where it offers the most. And, as the Natural Capital Project scientist and co-author of the Becky Chaplin-Kramer study says, "we have the information we need to avoid the worst scenarios that our models project and move towards a fair and sustainable future."