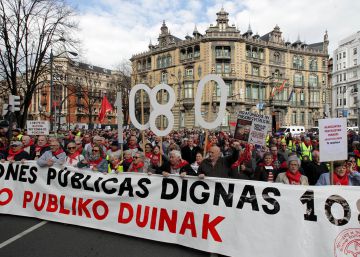 Mass mobilizations, scarce industrial closures. Nationalist unions have failed to paralyze the Basque Country with the general strike called for improvements in working conditions, pensions and to reduce the wage gap between men and women. The unions and organizations integrated in the Social Charter of Euskal Herria, and which have led THE A and LAB, have had an impact on the industrial fabric of Gipuzkoa, in the social economy sector and in some industries such as CAF and Irizar, but it has been quite reduced in Bizkaia and practically null in Álava, where firms such as Mercedes and Michelin have operated normally. The employer of Alava has estimated the closure of companies at 6%.

The fiasco has also moved to the public sector. In the general administration, unemployment has affected 17% of civil servants, ten points less than in the last one, in 2013; in Health, to 7.5 of the workforce; and in Justice at 3%. Something higher has been in university education and in children and middle school, with practically all centers open but without students. This is the second general strike during the mandate of Íñigo Urkullu (2013 and 2020), but there were eight suffered the socialist Patxi López during his tenure, between 2009 and 2012. Four of those strikes (May 21, 2009, June 29, 2010, January 27, 2011 and September 26, 2012) were convened by ELA and LAB. Two other calls (September 29, 2010 and November 14, 2012) were made by CC OO and UGT. Only on one date did the four agree (March 29, 2012), although in separate calls. Juan José Ibarretxe did not suffer any. The lehendakari said Thursday that he has lived the day “as a normal day.” Urkullu refused to meet with those responsible for ELA and LAB after the strike was called.

Where they have managed to be noticed has been in the demonstrations held in the three capitals where tens of thousands of people, especially in Bilbao. Although the call does not have the support of either CCOO or UGT, –yes there have been several associations of pensioners and the abertzale left– the demonstrations have had a wide response that the unions number 145,000 people in total (about 50,000 in Bilbao, 35,000 in San Sebastián, 25,000 in Vitoria), although the police forces reduce them by almost half.

Except for some clashes between the Ertzaintza and the informational pickets, which early in the morning have cut off access to Bilbao by road, there have been few incidents. The most notable occurred at the headquarters of the PSE-EE of the Gipuzkoan town of Errenteria, which dawned with graffiti in which you can read “Your government, your misery!”. Several strangers threw several firecrackers to the premises, confirmed the general secretary of the socialist group of this municipality, José Angel Rodríguez, in a statement. Nor have the authors of the Euskotren railroad cut between Berriz and Zumaia been identified by using a tree and knocking down three catenary posts. The service has been interrupted between both locations. Until noon the Ertzaintza had arrested four people. Commerce has remained open in the centers of Bilbao and Vitoria, and one in two in San Sebastian and its metropolitan area. They closed at the passage of the protesters, but reopened shortly after.

The concentrations that have traveled Euskadi have had their main role in Bilbao, where thousands of people have protested the streets to claim better working conditions and for pensioners. The marches have departed from several areas of the capital of Biscay since seven in the morning with hundreds of people in the San Mamés area, from where they have walked towards the central Moyúa square with pamphlets, speakers, some firecrackers and coffee thermoses . Demonstrators have made little progress beyond some interventions by the Ertzaintza, which has acted when several people have tried to boycott the shops that remained open.

Retired assistants have received a loud ovation when their column has arrived, after touring part of the Gran Vía, Moyúa Square, whose circular shape has allowed different marches, such as those integrated by the different unions, each to arrive on a street towards the meeting point. The appointment there has been quiet again and without incident, although the streets of Bilbao and its businesses have been decorated by a host of stickers and posters claiming a strike that has had little acceptance beyond the mood shown by the protesters.

The campaign starts today April 1, despite the coronavirus