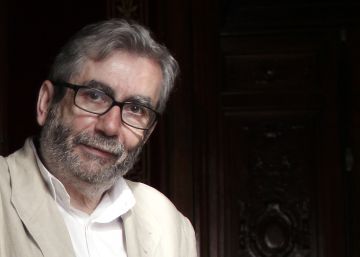 I crossed the Retreat on the way to the Prado Museum in the morning something fresh on the first Monday of September and Rembrandt and Vermeer and Franz Hals and Carel Fabritius are still there. That in the same city and in the same museum where you can see every day so many Spanish, Flemish, Italian paintings are in addition to visiting for a few months so many masterpieces of Dutch painting is an amazing privilege, and probably undeserved. I saw the exhibition Related looks, in which all of them are included, a little before July's disarray, and I see her again now with the joy of reunion, with gratitude for a discovery so revealing that it becomes an aesthetic and at the same time political lesson.

Since it was formalized throughout the nineteenth century, art history consisted largely of a celebration of national essences and glories. The history of art was invented more or less at the same time that the political monster, the nation, was invented and fed and was infected with it while strengthening it. A painter or a painting school emanated as organically from the national soil as plants or customs or food or racial features that constituted a solid identity. Literature was another one of those mysterious emanations. When, in 1905, the third centenary of the publication of Don Quixote, that extravagant and comic novel, which had had much more resonance throughout Europe than in the country of its first publication, was canonized as the top and the symbol of the Spanish soul. The ramblings of national talk of Ortega y Gasset or of Unamuno about Cervantes they are very similar, in their frivolity disguised as sharpness, to which the two also dedicated to Velázquez, another depositary of the Spanish essence. Alejandro Vergara, curator of the Prado exhibition, recalls a passage from Ortega in which the style of Velázquez It is attributed to "the artistic will that the race put in its veins." The "Spanish man", according to Ortega, is characterized, among other things, by an "antipathy towards all that is transcendent": from that blood or genetic condition comes Velázquez's tendency to represent the real. Miguel de Unamuno uses arguments of such intellectual rigor to explain the richness of Spanish painting: “Spanish sees much better than it thinks, and if it thinks well what it sees it does not usually see well what it thinks”. There are theorists who go even further. Not without some fun, Alejandro Vergara exhumes the opinions of an expert of the early twentieth century on Zurbarán's painting: “Where are the fundamental data to explain the painter's personality? In his land, Extremadura. As the taste of fruits is differentiated by something that always gives the soil that made them ... then we understand that it is in Extremadura, where Zurbarán He was born and raised, where you have to look for the background of his temperament. ”

According to the logic of national art stories, there could not be two schools of painting as opposed in the seventeenth century as the Spanish and the Dutch. One country seemed the reverse of the other, and that is why the two had maintained such a long war, in which Holland would have been forged as a nation. Every nation requires an invader and an evil oppressor against whom to rebel and who to defeat in a supreme feat that is both heroic and martyrdom. Spain is the Inquisition, despotism, obscurantism, religious intransigence, economic backwardness. Holland, flattering, just the opposite. Unfortunately for the Spaniards of that time, a part of that opinion is true. But the differences come from historical, geographical and political hazards, not from immutable national essences or characters. And when you look for your reflection in the history of painting, what you find is evidence that until very recently almost nobody has wanted to see, because it goes against several centuries of identity superstitions. Almost all the aesthetic features that are considered essential in seventeenth-century Dutch painting resemble those of Spanish painting of the same period. There is no theoretical argument as persuasive as simple visual experience. In the well-calculated gloom of the exhibition halls, the first thing one sees is a sequence of portraits of serious men dressed in black, with white lace goals or necks called lechuguilla that allow an admirable chromatic play. The gloom at the back of the portraits is very similar to the one that reigns in the room, and also the meditative and severe expressions of those characters who look at us with a mysterious mixture of immediacy and remoteness. Some are Spanish, and others Dutch. If we did not distinguish the individual style of the painters it would be very difficult for us to know to which country they belong. By the second third of the seventeenth century, in most of Europe, fashion had led to greater color richness, and a more ostentatious display of luxury. Two countries, Holland and Spain, retained the black label and white necks that came from the previous century.

The connections, the resonances, are innumerable. That alley of red brick houses of Vermeer it seems to us the most specific, the most irreducible of Dutch art: but if we see the painting next to the view of the Villa Medici de Velázquez, an air of familiarity, even of equivalence, stands out with a clarity that illuminates the two works. Velázquez and Vermeer could not know anything about each other. I wouldn't see either Rembrandt no picture of Velázquez, although the two cultivate the same freedom of brushstroke, the wisdom to suggest atmospheres, the insight in the observation of human beings. They lived in their remote and hostile countries, but shared a tradition inherited from Flanders and Italy, and were part of an international network of dissemination of prints and theoretical debates, a common European culture that was that of the Renaissance and that of humanism, in the that mixed classical heritage and Christian imagery.

It comforts one to find this exhibition, just started September, at the end of a European and global summer of sinister auguries. It is possible to appreciate the differences and celebrate and thank at the same time all the similarities that unite us, the communicating vessels of human experience. Perhaps there is no better antidote against the horrible monotony of patriotic insolence and xenophobia.