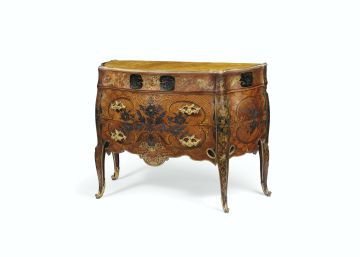 National Heritage rescues an old lost dream: the fourth comfortable of the official office of Carlos III, is believed to have been lost since the early nineteenth century. He has gone to New York to buy it at a Christie’s auction and brings it for 400,000 euros, a price four times higher than the exit offer. The piece had lost track since it disappeared, it is not known when or how, of the Royal Palace.

Of the three Rococo jewels that are preserved, only the one preserved in El Pardo can be seen. The other two are inaccessible to public view except on December 24, Christmas Eve, when King Felipe VI addresses all Spaniards from his office in La Zarzuela. There they appear, gleaming, framing the monarch in the plane that reveals, in the background, the window through which the Christmas tree from the royal garden appears. The devotion of the current king is well known for the figure of Carlos III, whom he placed behind him in his most committed speech, after the illegal 1-O referendum.

The dresser designed by Matteo Gasparini between 1765-1775 will be exhibited at the Museum of the Royal Collections, cu inauguration maybe happen in 2021. "If they had not been acquired, it would have been very painful for Spanish heritage, but I did not expect them to exceed 250,000 euros," says Angel Castán, an eighteenth-century court art specialist and professor of Art History at the Autonomous University of Madrid. In fact, the purchase operation has been carried out in absolute secrecy from National Heritage when in April there was news of the sale of the furniture on Tuesday.

“It's a very important piece and we don't know where he has been all this time or how he left Spain. There is more furniture in that royal office that is for sale in New York antique dealers, such as one of the bookstores. But they ask for her 900,000 dollars, ”says Castán. According to the expert they began to be built in the early sixties of the eighteenth century and it took about 20 years to complete the complete set, which was dismantled shortly after, with the rise to the throne, in 1788, of his son Carlos IV. It brought less recharged tastes.

The dressers were located in the central office of the three that the "enlightened" king had assigned to his office, with privileged views of the Campo del Moro. Gasparini came from Naples with the monarch, where he had served as a decorator during his Neapolitan reign. The commission was to make the Royal Palace that was going to build on the ruins of the burning Alcazar, in 1734, a propaganda ship capable of impressing international diplomacy. Together with Gasparini, Giovanni Battista Tiépolo and Anton Raphael Mengs arrived to make Carlos III's opulent wishes come true.

The "adornista" Gasparini the king appointed director of the royal workshops, which included embroidery, bronzes and joinery. Cabinet maker José Canops collaborated with the Italian in the lush decoration of the narrow royal work rooms, with pink silk curtains, marble floors and walls covered by more silk. The fronts of the four exclusive pieces have designs of birds, fish and flowers, in ebony that mimics the Chinese lacquer.