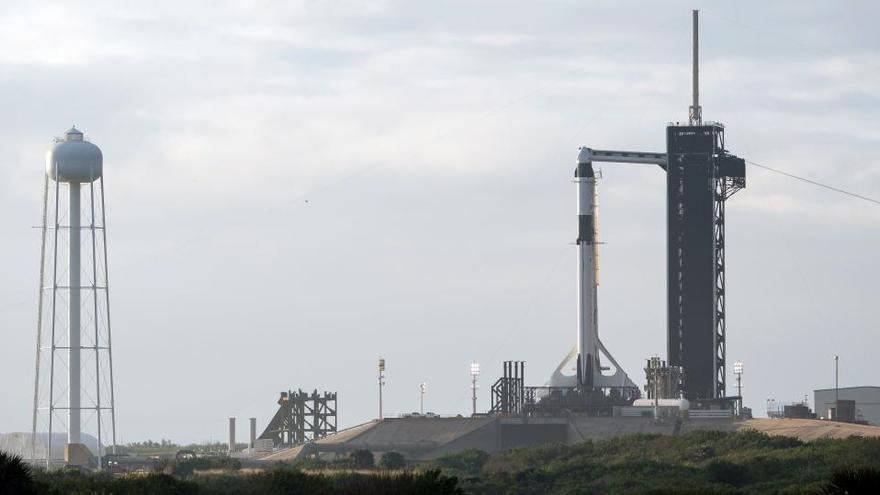 The POT and the company Spacex maintain the confidence of being able to send on Sunday from Cape Canaveral (Florida) the first manned operational mission to the International Space Station (ISS) from US soil, after bad weather caused by tropical storm Eta forced it to be postponed for almost 24 hours.

A SpaceX Falcon 9 rocket with the Dragon capsule on it will take off, if the weather does not prevent it, one day later than expected, that is to say at 7:27 pm, local time, on Sunday November 15 (00.27 hours GMT on Monday 16), with four astronauts on board. Once it is separated from the rocket, which is reusable, the capsule, dubbed Resilience for this mission, will arrive at the ISS at around 11:00 p.m. on Monday (4:00 GMT on Tuesday).

The mission had to be postponed one day, it was scheduled for this Saturday, due to the bad weather generated by tropical storm Eta, which on Thursday crossed the entire northern part of Florida and continued its journey in Atlantic waters after leaving heavy flooding in this state. According to the mission managers, the weather conditions did not offer guarantees that the platform that should receive the Falcon 9 rocket will reach its position in the Atlantic Ocean.

It is planned that a part of the rocket is used again in the next mission manned to the space station of NASA and SpaceX, to be carried out in March. "The weather was such because of this tropical storm, that we could not get the drone (platform) to leave on time and get there," said Benji, director of Space X's Manned Space Flight Program at a Cape Canaveral press conference. Reed.

In turn, Steve Stich, NASA's Commercial Crew Program, pointed out that the first stage of the Falcon 9 rocket that will be used in the flight of the Crew-1 mission will be reused for "the Crew-2 mission that is coming in spring".

On board the capsule they travel an astronaut from the US space agency, Shannon Walker, and two male colleagues, Michael Hopkins and Victor Glover, in addition to japanese astronaut Soichi Noguchi, who will be received at the ISS by NASA's Kate Rubins and the Russians Sergey Ryzhikov and Sergey Kud-Sverchkov. The four astronauts have been at the Kennedy Space Center for days and on Thursday boarded the spacecraft for a series of tests before launch.

This is the first of at least six missions that SpaceX will conduct to the ISS because of a $ 2.6 billion contract signed with NASA in 2014, and which includes manned and other cargo flights.

SpaceX founder and CEO Elon Musk wrote on his Twitter account on Friday that he ran four tests of the coronavirus SARS-CoV-2 in the same place and with the same nurse and two were negative and two positive. Asked about possible transmission of the disease to astronauts and mission members, NASA Administrator Jim Bridenstine said that day that was not aware of Musk having contact with the astronauts mission, but that SpaceX should trace the contacts.

Hours later, Reed and other NASA executives assured that both SpaceX and NASA they weren't concerned with contact tracing and that the four astronauts have also maintained a strict two-week quarantine as a precaution. "I can assure everyone that we look good for the Crew-1 launch and for all personnel involved," said Reed.

In the event that the mission cannot take off as planned on Sunday from the historic Kennedy Space Center platform 39A, the next scheduled date would be Wednesday, November 18.

Bridenstine, you said earlier that the end goal of missions like Crew-1 is "to have more resources to do things for which there is no commercial market yet, like going to the Moon and Mars under the Artemis program. "" When we have more astronauts, a complete replacement on the International Space Station, the amount of research that is going to produce is going to be transformative, "he added.

The Crew-1 mission was preceded by the historic Demo-2 test trip, which began on May 30. On that mission, Bob Behnken and Doug Hurley traveled to the ISS and after two months they returned to earth in the same capsule, which fell into the Gulf of Mexico in a controlled and smooth manner on August 2.

The six-month Crew-1 mission was originally scheduled to start on October 23, but was postponed to October 31 and then undated until NASA announced in late September that it would be November 14. On Friday, it announced that it was being postponed to the 15th, the penultimate postponement was due to the discovery of a Falcon 9 rocket motor problem during a flight not related to the NASA program.