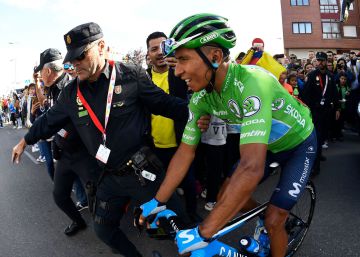 Nairo Quintana has caused a surprising turnaround in the general classification of the Lap 2019 after a superb exhibition in the 17th stage that took place this Wednesday between Aranda de Duero and Guadalajara (219 kilometers). The Colombian Movistar cyclist has finished the day in 14th place, just ten seconds from the Belgian Philippe Gilbert, winner of the stage. However, with its time of 4 hours, 20 minutes and 25 seconds, it has hit a spectacular jump in the standings, placing it in second place, 2 minutes and 24 seconds from Primoz Roglic, which remains the leader.

Before the start of the stage, Quintana appeared in the 34th position of the general, just over eight and a half minutes from the head of classification, which with what the Colombian has cut in more than six minutes his difference from that of the leader. With this magnificent performance he has also placed himself ahead of the Spaniard, and Movistar's partner, Alejandro Valverde, who is in third position two minutes and 48 seconds from Roglic, and 24 from the Colombian.

"I already commented from the beginning of the race that I did not know how the body was going to respond after the Tour. It is the first season we focused on the Tour and we came here without knowing how it would be," Quintana said before Wednesday, in relation to the cold that has conditioned him in recent days.

Espanyol call for the match against Athletic

Real Sociedad: Illarramendi leads the protest of the Real for the Cup schedule: “You have looked”

“The VAR is a great lie” – The Province