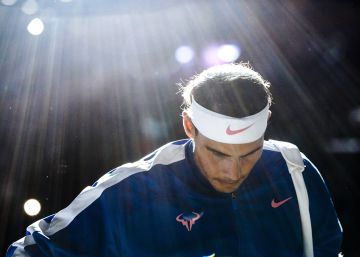 In the instant when Rafael Nadal He received the call from Dr. Ángel Ruiz Cotorro, confirming this that there was no break in the abdominal area, number one started the time trial. He wants to compete in the Masters Cup, which starts next Sunday in London, and since the doctor gave him the medical parameters he got down to work because the desire to win a tournament he has not won never weighs. And a lot. At the moment, the number one moved to London and this Wednesday will begin to combine the treatment with the recovery process.

Within the misfortune of suffering a mishap at this point, after eight months in which his body had respected him, Nadal received the diagnosis with open arms. Last Saturday, in the warm-up before the duel against Denis Shapovalov, he felt a discomfort in the abdominal musculature and feared the worst. However, the resonance that was done on Monday in Palma de Mallorca found that the injury is minor, and that a priori you can have the time to play.

"It is somehow a relief, yes," admits Ruiz Cotorro. “Because the fact that it is a relaxation is good news. In that sense we are happy, because if it had been a break it would have been complicated, since the deadlines we have are very small, ”explains Nadal's trusted doctor.

“There is a distension of muscle fibers, with small micro-fractures at the microscopic level, but there is no break that requires scarring. We simply need to distend that area. It is very little thing and we can recover it these days, although it is true that it was done on Saturday and will play on Saturday or Sunday, and every day counts, ”he says.

Yesterday, Nadal learned that the Russian Daniil Medvedev, the Greek Stefanos Tsitsipas and the German Alexander Zverev should be measured in the initial group stage. Meanwhile, in the other Novak Djokovic, Roger Federer, Dominic Thiem and Matteo Berrettini will collide. Nadal has, then, four days to improve and get the best possible at the start of the event, in which he struggles with Nole to retain the number one and close the year at the top of the ranking.

“The probabilities are going to tell us the day to day and the clinical evolution. It has some discomfort, of course, but the evolution is favorable and they are remitting. You can go training, although below one hundred percent, and the retraining phase will be the one that will mark if you can play or not. We have to try to ensure that the risk is minimal, that Rafa comes out in true conditions to play, ”he transmits through the telephone Ruiz Cotorro.

Regarding the treatment to follow, the doctor points out: “We are going to try to relax the entire abdominal area, based on muscle relaxants and a deep thermotherapy with Indiba – a radiofrequency machine used by many athletes today; This will contribute to all the work he does with Maymò [Rafa, his physio]. Once that first phase is over, it will begin to adapt to the serve progressively. ”

Although participation is still in the air, the perspective of Nadal's team is positive. However, the champion of 19 greats will not make a final decision until the day before debuting. "We will complete all phases and wait until the end," says the doctor, who will accompany him in London. “For now we can go there and start training. Day by day will tell us the possibilities you have of playing. On Saturday or Sunday we will know. ”