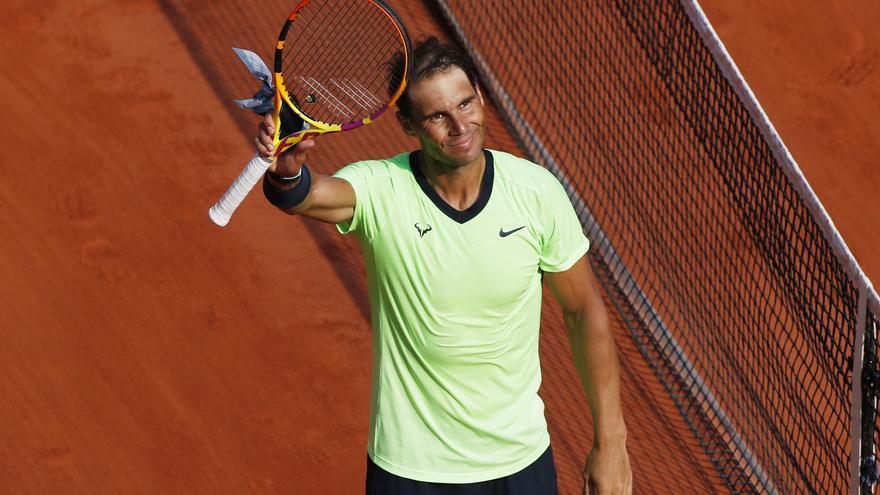 The Spanish Rafael Nadal a set was left against the Argentine Diego schwartzman, the first to lose since 2019 in Roland Garros, but he prevailed on the way to his eighteenth semifinals in Paris, 6-3, 4-6, 6-4 and 6-0 in 2 hours and 45 minutes.

The duel, a repeat of last year's semifinals, was more even, at times it even seemed that he could fall on the side of the Argentine, but a reaction from the Spaniard in the final stretch left him one step away from a new final.

His rival to achieve it will leave the match between the Serbian Novak Djokovic, number 1 in the world, and the Italian Matteo berrettini, number 9.

"Diego is an incredible player, always very difficult for me. It's incredible to go back to the semifinals again, thanks to the public, to the people of Philippe Chatrier. It is always very exciting for me to play at Roland Garros, my favorite tournament, the most important of my career "said the Spanish, who acknowledged that during the second set he lost his aggressiveness.

Schwartzman, who entered the duel without having lost a set, with the tone recovered from last year after an irregular tour of clay, forced Nadal to raise his level, to seek the deepest resources of his talent.

The result was a showy duel, with two sets played from power to power, which delighted the public, again returning in large numbers to the stands due to the relief of the restrictions imposed by the pandemic.

The 5,000 spectators, a third of the capacity of the Philippe Chatrier, restored the traditional flavor to the tournament. The "Come on Rafa!", the chants, the applause, the murmurs and the "silence s'il vous plait" of the referee. The match was no longer the night mass of the last few days or, at best, the listless duel with four cats.

Roland Garros regained some of its chicken coop spirit and fun and Nadal and Schwartzman knew how to give it tone and emotion, on a sunny Parisian afternoon.

The result was a new victory for Rafa, the 105th in his favorite tournament, the eleventh against the Argentine in twelve games, the third on the brick dust of Paris.

Schwartzman can take comfort in that he got a little closer to a rival he has only defeated once, last year in Rome, and because he discovered that under Nadal's alien skin exists a vulnerable rival.

The "Peque" started the first set to Nadal since 2019, ending a streak of 36 consecutive victories, two from his record, 38, which Schwartzman also cut in 2018, when the Spaniard was three away from the best mark in the tournament, achieved between 1979 and 1981 by the Swede Bjorn Borg.

It was the fifth set that he has won in twelve games, in which he has yielded 32.

The world number 3 started strong, very safe from the back of the track, without giving space to the attacks of Schwartzman, who was slow to come into play. The Argentine, however, did not give up the easy skin, but the precision of the Spanish allowed him to score the first set.

From there the "Peque" underwent a transformation, turned into a hammer that vulgarized the game of the king of Roland Garros, forced to survive the attacks of the 10th of the world, which got to be 3-0.

Despite a quick reaction from Nadal, who equalized the set, the Argentine had found the Greeks of his rival's game, too shy, short, an open door to attack through which many points slipped through.

Schwartzman threatened Nadal, but did not disarm him until the tenth game, to sign up for the partial.

The score and the feelings were Rafa's worst in a long time in Paris. The Spanish seemed gripped, at the mercy of the Argentine, who throughout the third set stood up to him, played from you to you to the rival who has beaten him so many times.

The cries of "Diego! Diego!" They encouraged the Argentine, who felt powerful, comfortable on the court, in front of a blurred Nadal who was limited to not letting go of the duel.

Nadal stepped on the gas

Until Nadal decided to end the Albiceleste party, He raised the level and the brightest spots came out of his racket. Sparks were seen again in his blows and blood on the side of a Schwartzman who had enough not to fall on the canvas.

Nadal celebrated the points with rage, lifted the public from their seats. He scored the third set and did not drop the piston, true to his style, which has taken him so many times to the top of clay tennis.

A rhythm that the "Peque" could no longer follow, condemned beforehand, victim of a monster stung at his pride. Already without morale, Schwartzman suffered the first 6-0 in all his games against Nadal, a punishment for having awakened the beast.

The "Peque" won the affection of the stands, cheered on his way out amid shouts of "Diego! Diego!" in honor of the man who allowed them to see the best version of Nadal.