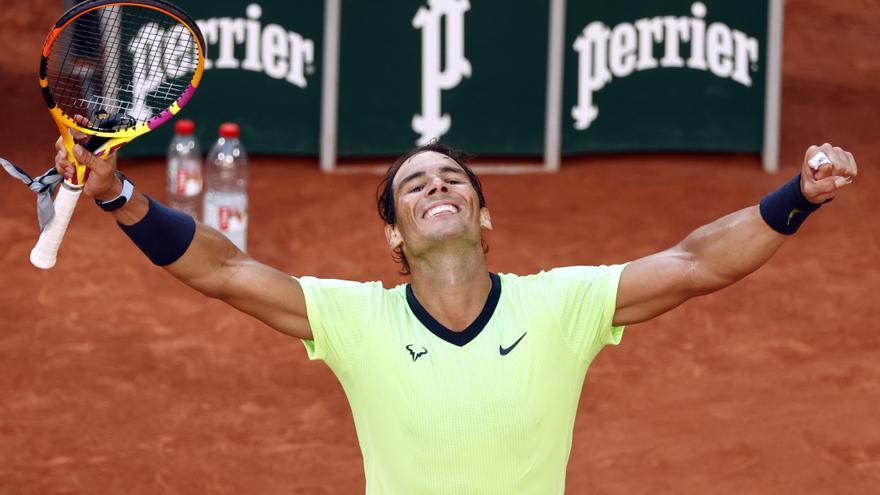 The Spanish Rafael Nadal He prevailed, in a solid match, against the young Italian promise Jannik Sinner, 19 of the world at 19, for 7-5, 6-3 and 6-0, in 2 hours and 17 minutes, to qualify for quarterfinals of Roland Garros, where the Argentine awaits you Diego schwartzman.

The world number 3 had two moments of doubt, at the start of the match and midway through the second set, but the rest of the duel dominated the impetuous transalpine, who in spades displayed great tennis.

"I started well in the first two games, then I was too defensive and I allowed him to have the rhythm"

The Spanish He is already in the quarterfinals without having yielded a set. In fact, with the three wins against Sinner he has already chained 35, three of his best streak on French clay, achieved between 2015 and 2018, and six of the record held by the Swede Bjorn Borg between 1979 and 1981. "I have started well in the first two games, then I have been too defensive and I have allowed him to have the rhythm, I have made some mistakes, but then I have re-engaged in the game, "said Nadal, who acknowledged having had another bad moment in the second set.

The game had things from a year ago, played on a cool night in the Parisian autumn. Then, the Italian also entered with impetus, who led Nadal to a playoff game in the first round, but little by little the Spaniard was cooking a victory that, in the end, was overwhelming.

This same year in Rome they lived a second duel and, again, Sinner's resistance was more to less.

The third duel took place a few minutes after the Serbian Novak Djokovic, number one in the world, would be forced to soar two sets against another promising young Italian, Lorenzo Musetti.

Although Nadal was immediately 2-0, the Italian displayed an aggressive and successful game that allowed him to score four consecutive games that made him grow. So much so that his tennis began to lose precision.

With 5-4 in his favor he had service to win the set, but vertigo seized his nerves and he conceded the serve with a double fault.

The reaction was automatic from Nadal. Eight games on his side in a very good version of the champion, which not only helped him to score the first round, but also to get the second on track.

With 4-0 the Spanish had his second moment of 'absence' that the Italian took advantage of to break Nadal's service twice, who, beaten, woke up to score another eight consecutive games and leave the duel seen for sentence.

Now Schwartzman awaits him, one of the few players who has beaten him on clay. It was last year in the quarterfinals of the Rome tournament, in which the Argentine reached his only final in a Masters 1,000.

It is his only victory in eleven games against Nadal, who last year in the Paris semifinals defeated him forcefully.

"He is a difficult opponent, he is playing well, but when you get to this stage of the competition you can't think of having easy opponents"Nadal said.