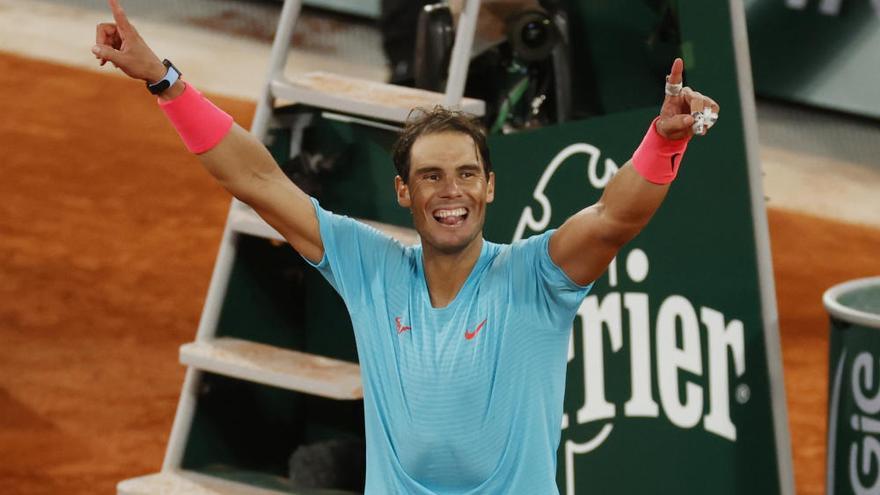 The Spanish Rafael Nadal this Sunday added his thirteenth crown of Roland Garros before the serbian Novak Djokovic, which he beat by 6-0, 6-2 and 7-5 in 2 hours and 41 minutes, and drew with the Swiss Roger Federer to 20 Grand Slam titles.

In a easier ending than expected Against the world number one, the Spaniard achieved his 100th victory on the clay of Paris. “This is not the time to think about the big 20 or records, it’s time to think about this tournament, which is everything for me. Just being able to play here is a pleasure, “he assured.

At 34, Nadal also won the Roland Garros of the coronavirus, moved to autumn, with cold and humidity that reduce their conditionsBut even in that context, he maintained the hierarchy of a tournament that he has made his own. No one had raised 13 cups before in the same tournament. Martina Navratilova had twelve crowns in Chicago.

Nadal becomes the fifth player to exceed 100 victories in a great and he did so under particular conditions, with hardly any audience in the stands due to the restrictions imposed by the coronavirus pandemic.

Spanish, what landed in Paris with only three games after confinement, showed that at Roland Garros he is growing and endorsed Djokovic his second defeat of the season, after he suffered it at the United States Open by disqualification after hitting a linesman against the also Spanish Pablo Carreño. The number one in the world remains at 17 grand for now and with a single triumph in Paris, without being able to become the first tennis player of the ‘open era’ that adds at least twice each of them.

Half an hour before the start of the game, autumn was present in the form of rain and the brand new roof of the Philippe Chatrier justified the investment: the 2020 final would be played indoors, like the 2012 Australian Open. The omen was bad for the Spaniard, a lover of the sun and the playing conditions that it entails and who had lost that only final between the two indoors. But the Spaniard does not have time to entertain himself in statistics, or to review the history books or to deal with everything that does not happen in the ocher ring that has become his fiefdom.

The one who entered cold was the Serbian, rigid and without the liveliness that characterizes him, at the mercy of Nadal’s game, better planted, hungrier to win the duel. The attempts of the world’s number one to look for holes in the Majorcan’s wall were useless, neither abusing the left nor looking for impossible angles. Everything that went on the Spanish side, came back poisoned.

With only one out of every four first services, the Balkan gave up one of his best weapons and thus explains that his serves were parading on the side of Nadal, who, signed with his, it took almost half an hour to concede a break ball.

Only one in the first set, which the Serbian did not take advantage of, which he let his sleeve escape blank, the second 6-0 in history between the two after that of Rome last year, then also in favor of the Spanish.

He improved the Serbian’s first serve percentage and won his first game to open the second set, but in return, Nadal read the game better on the net and dried up the sustenance that Djokovic was giving the dropouts. The Spanish steamroller did not slacken and the Serbian had to risk too much, seek the impossible, what can go well or badly. The number one did not have his day and multiplied the errors, without managing to disarm Nadal’s defense.

Alone midway through the third set there was a hint of reaction from Djokovic, who, after giving up his serve, recovered it by converting his first break ball of the 5 he had and harangued the depopulated stands, in search of sustenance to try what nobody had achieved before, to overcome Nadal two sets on clay . The Spanish did not collapse, who continued with his strength to achieve the liberating victory with a direct service point.

Teldeportivo visits the leader of the group, the Catalan Espluges

Cádiz extends its imposing return to Primera in Ipurua

Barça achieves an epic comeback on the Baskonia court