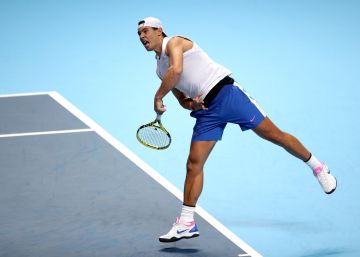 Rafa Nadal is still testing to reach the Masters Cup. The number one tennis player in the world has practiced intensely the service in training this Friday at the central track of the London ATP Finals. The Mallorcan hurries the deadlines to compete in the Cup, in which he is scheduled to debut on Monday against Alexander Zverev (21.00, #Vamos), after the abdominal injury he suffered in Paris-Bercy last Saturday.

Nadal has trained for an hour, supervised on the track by Dr. Ángel Ruiz Cotorro; his coach, Carlos Moyá; and his physiotherapist, Rafa Maymó, as explained in the subsequent press conference. The Spaniard has focused on the serve, since on Saturday he noticed a tear in the abdominal area while performing a service before measuring himself with Denis Shapovalov. The tennis player himself explained that he did not feel pain during the rallies but did take pain.

The number one has made a warm-up before testing its service, to end with a pair of playoffs with the Italian Matteo Berrettini, debuting in the competition. In this way, the Mallorcan continues with the preparation of the Masters Cup, in which he will face, in addition to Zverev, the Russian Daniil Medvedev and the Greek Stefanos Tsitsipas. Meanwhile, Novak Djokovic, Roger Federer, Dominic Thiem and Berrettini will fight in each other.

The lesion, "a strain of muscle fibers," according to Dr. Cotorro, is minor, which suggests that Manacor could arrive recovered to defend the leadership of the ATP against the threat of Djokovic.

Confirmation in the North – The Province

Valencia Basket surprises Barça and takes air in the league