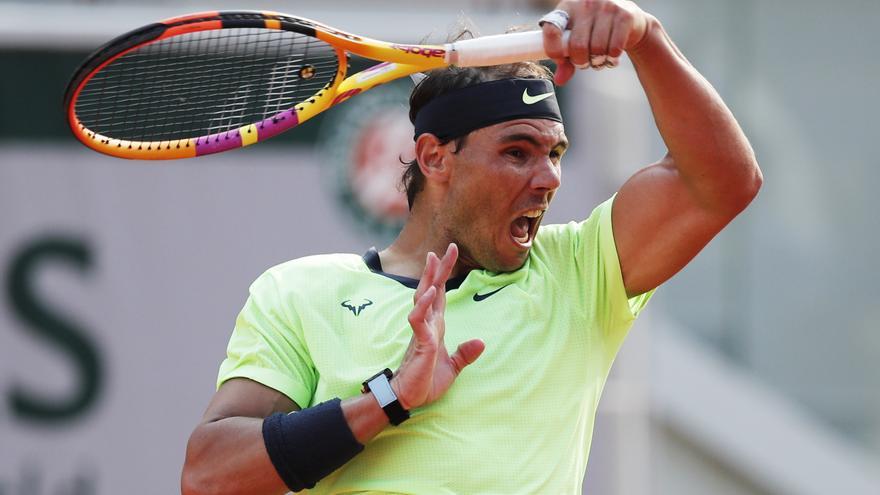 The reign of Rafael Nadal on clay it resists the attacks of many rivals, but none as insistent as that of the Serbian Novak Djokovic, his rival this Friday in the semifinals of Roland Garros in chapter 58 of the most repeated duel in tennis history.

For the moment, the Spaniard has managed to maintain the square against the attacks of the Serbian, who one more year seeks to dethrone him in his empire, in the place of his greatest glory, a bombshell in the world of tennis that would place him in his fifth final on French clay, where he has only lifted one title.

Nadal will try to keep the castle safe, preserve his everlasting dominion, celebrated and hated, brilliant and dreary, in search of its fourteenth final, the penultimate step towards his 21st Grand Slam that would place him, alone, at the top of men's tennis, rid of the tie with the Swiss Roger Federer.

The machinery seems launched and the Spanish has been regulating all the elements to reach Roland Garros in his moment of ecstasy. "We come from less to more, the progression of Monte Carlo here has been very good," says his coach, Carlos Moyá, that the culminate in the final stretch of the quarterfinal match against Diego Schwartzman.

Morality is on your side, because has not lost to the Serbian on clay since 2016, has just defeated him in the final in Rome and has left better feelings in the five duels that each one has played in Paris.

Nadal left a set against Schwartzman, the first to escape him at Roland Garros since 2019, and except for that setback and a slump he suffered against Italian Jannik Sinner in the second round, his participation has been perfect. "We do not worry too much about those moments, we know what it is capable of. If he can play the whole game at a high level, the better, but going through difficulties along the way does not hurt, "says his coach.

Caution despite the background

Although the most recent antecedents benefit Spanish, the tennis player remains cautious and repeats his favorite mantra: "To beat Djokovic I have to give my best level." "We hope that he makes a move. In recent years he sees that what he tries has not worked for him on clay," says Moyá, aware that the Serbian has the resources to impose himself: "Whoever can implement his game scheme will have more chances of winning. "

In addition to the victory of Rome, on the morale of the Serbian will also weigh the memory of last year's final, a "clay tennis masterclass"in which the steamroller Nadal crushed Djokovic." That level will be difficult to overcome, I sign to match it, "says the former tennis player, who adds:" "We see his level many times in training, it was not a surprise for us" .

The numbers are in your favor. Nadal has beaten Djokovic in 19 of the 26 clay-court matches and 7 of the 8 at Roland Garros. If he wins this Friday he will equal 29 wins with the Serbian in all the games included.

"It is not a game like the others, it is special, but in the end, to win, you have to do the same, be better than the rival," says Nadal. Neither he nor anyone on his team wants to hear that this is the anticipated final, always cultivating a prudence that has become the watchword of the team.

The biggest challenge in tennis

Nor does the Serbian abound in this discourse, although he does allow himself to assure that confronting Nadal at Roland Garros is "the greatest challenge you can have" in tennis, a challenge he faces confidently: "The level of tennis that I have played for three or four weeks on clay, in Rome, Belgrade and here, allow me to have positive feelings for this duel." "I think I can win, if not, I would not be here," says the Serbian, who does not hesitate to describe the rivalry he has with the Spanish as "historic".

Despite the fact that he carries the poster of number 1 in the world, Djokovic knows that he does not start as a favorite. His game has left some gap in Paris, where he left two sets against the young Italian Lorenzo Musetti, a debutant in Grand Slam, and another against the also transalpine Matteo Berrettini. Nothing to scare the Serbian, who knows that tIt has enough quality to beat anyone and who has, between eyebrows, add a second crown in Paris to become the first man to win at least twice each of the Big Four.