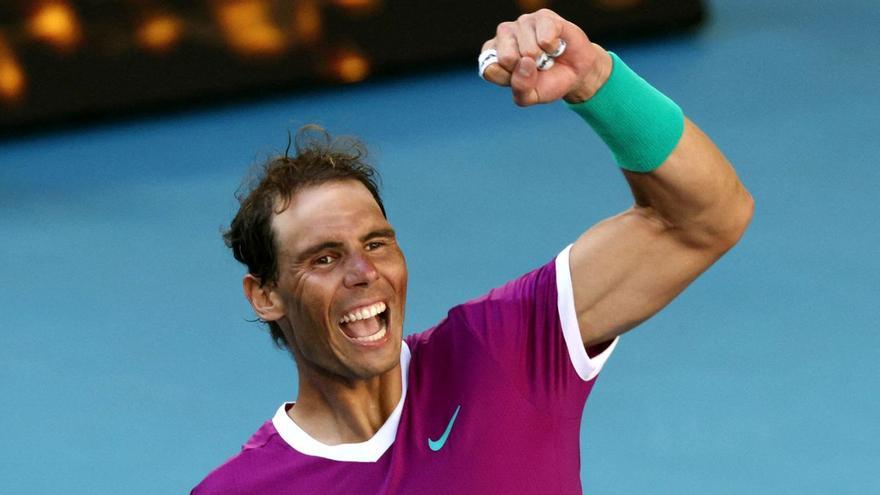 Without Novak Djokovic, deported from Australia; with Roger Federer, injured; Rafael Nadal faces from Friday (04:30 Eurosport) the defense of the domain of the 'Big Three', the club to which the three stars of the tennis which, since 2004, has won a whopping 60 Grand Slams, 16 of them won at the Rod Laver Arena in Melbourne.

Nadal's mission has a double prize because it would break the triple tie at 20 Grand Slams that he now shares with the Serbian and the Swiss. The territory is not the best to achieve it. Only in 2009 did the former number 1 manage to win and place his photo in the hall of champions that leads the players from the locker rooms to the center court of the Australian Open.

Nadal is the only champion remaining among the four candidates for the title. He is the veteran, but at 35 years old and loaded with physical problems, he did not even think three weeks ago that he would be in the semifinals of the tournament, after the scaphoid in his left foot left him out of action since last month. of August.

TO Nadal It will be up to him to defend his options against a new generation of tennis players who aim to be the future 'Big Three', made up of Daniel Medvedev (2 world), Stefanos Tsitsipas (4) and Matthew Berrettini (7), with permission from alexander zverev (3), eliminated in the round of 16.

Four tennis players hungry for glory. The most outstanding, Medvedevwho won his first major in New York last September, defeating Djokovic and taking away the possibility of the number 1 of that coveted 21 Grand Slam and the conquest of the four greats in the same year.

The Russian tennis player, a finalist last year in Australia, seems the most prepared for the final assault on the throne of Djokovicalthough this Wednesday he was about to be knocked out by the Canadian Felix Auger-Aliassime which he could not get rid of until after 4 hours and 41 minutes of a titanic battle to come back from two sets against and win 6-7 (4), 3-6, 7-6 (2), 7-5 and 6- Four.

A missile at 210 km/h allowed Medvedev save the match ball that he had in the third set with 5-4 against and being able to launch himself for a spectacular comeback after losing the first two sets and asking himself "What would Djokovic have done in this situation?", as he revealed after winning.

Medvedev will face in the semifinals Tsitsipassemi-finalist twice already in Australia (2019 and 2021) who defeated the Italian Jannik Sinneranother rising talent 6-3, 6-4 and 6-2.

Russian or Greek should be the last hurdle of Nadal to the title, but first the Balearic tennis player will face a tough test against Berrettini, Wimbledon finalist last year, announcing his intentions at the match: “I want to win to Nadal. I know I can."