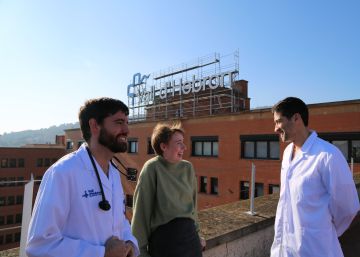 Audrey Mash (Kent, 34) had a hard time assimilating her unusual leap to fame. For weeks after his accident in Vall de Núria, in the Girona Pyrenees, people asked him selfies in the bars and boarded her down the street. “Everyone is very happy for me,” he says with resignation. Of course, they almost always ask the same question. “Is it true?” He recalls in his native English, is it true that he survived a cardiorespiratory arrest of more than six hours?

Mash and her husband got lost on November 3 after being surprised by a snowstorm, which disoriented the couple. Mash began to suffer the lashes of the intense wind and cold until he was unconscious due to the hypothermia he suffered. Hours later, emergency services found the couple. Audrey was in full cardiorespiratory arrest and her body did not exceed 20 degrees, a key factor for its survival: it allowed the preservation of its organs.

She doesn’t remember anything that happened that day. “When I woke up, I didn’t understand the seriousness of what had happened to us, at least not immediately,” says Mash, who, after being rescued by helicopter, He entered the Vall d’Hebron hospital in Barcelona. “Even when they told me the whole story I didn’t fully assimilate it. I only understood when I left the hospital, ”he adds.

“My husband doesn’t like me to say I was dead; Maybe I have a very black mood! ”He jokes. His partner, Rohan Schoeman, is currently attending a psychologist specializing in traumatic events. “Avoid talking about it. It needs time to process what has happened, ”says the woman.

“The family is the one who suffers most from the Intensive Care Unit (ICU),” warns Jordi Riera, deputy doctor in this area of ​​Vall d’Hebron. “The critical patient is sedated, asleep or, as in the case of Audrey, does not remember clearly. Without a doubt, your partner is the one who will suffer or remember the process more, ”adds Riera.

Audrey was saved thanks to an extracorporeal membrane oxygenation (ECMO) technique: a machine that temporarily replaces the function of the heart and lungs, oxygenating the blood externally. Riera also directs the ECMO program of the Barcelona hospital. “Precisely a week before Audrey’s case, I spoke with Eduard to improve resistance to hypothermia.” It refers to Eduard Argudo, the assistant doctor who received and was in charge of the patient during his resuscitation and subsequent recovery. The ability of Argudo’s team – they revived her after nine o’clock at night, when her body reached 30 degrees of body temperature – led Audrey not to drag important sequels. “The first few weeks it hurt a lot to walk and I was very tired, but it happened soon. A month later I went back to my daily routine, ”says the English teacher.

The British drag some minor injuries, despite everything. He has lost mobility in the fingers, a discomfort present since his hospital discharge and for which he needs rehabilitation. “I have a hard time getting my fingers together, I exercise different muscles of my hands one hour a day,” he explains.

There is a novelty regarding the symptoms that previously appeared in the hospital. “I’m losing hair,” says Mash. “Before there were only two bald little ones, and now it is a bigger one. As I can’t see her, and my husband didn’t want to worry me, I didn’t realize until my mother asked me why she had enlarged, ”says the patient.

“Normally, this occurs in critically ill patients with severe hypothermia,” says Dr. Argudo. “The body was for hours without sufficient blood and oxygen supply, and although this did not cause neurological damage, other types of injuries have occurred.” The doctor believes that the head is affected by being a support area. The pressure of the skull against the floor or the hospital bed causes even less blood and oxygen to reach the area, causing hair loss. “It’s not too common, but it’s described in serious patients,” Riera contributes.

Audrey promised to return to the mountains within a year. “There is so much nature in Catalonia … it is one of the reasons we chose Barcelona to live,” he says. “I would be very sad if I stopped mountaineering.” Despite the fears of his partner, the English already has planned for next weekend two simple hiking trails through Ripoll and the Collserola mountain range. “I do not consider that my vital perspective has changed after the accident. I think I was lucky to have a happy life before it happened. If something has changed, I have realized that I was happy, ”concludes Mash.