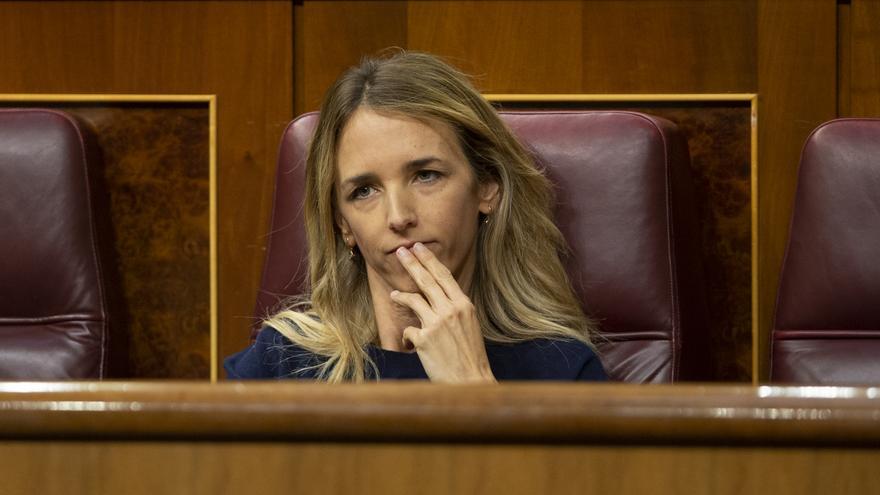 For Cayetana Álvarez de Toledo, until today the PP’s parliamentary spokesperson, the president of her party – the person who appointed her amid criticism from the barons – has become “Mr. Casado.” In a harsh statement to the press in front of the Congress of Deputies, the one who has been number one of the party in the Lower House has expressed his disagreement with Pablo Casado’s decision to dismiss him. The reason, according to her assertions, is that her speech – more radical than that of the party – undermined the “authority” of the national leader. After a trail of criticism of Casado, the export voice has for the moment left on the air her continuity as a deputy in Congress and in the party.

“Mr. Casado considers that my conception of freedom is incompatible with his authority. It is a vision of his authority that I do not share,” he said after “regretting” the decision and considering it “harmful to the parliamentary group, to the PP and to a strong, adult, modern Spain with free and equal citizens “. Álvarez de Toledo has stressed that the causes of his dismissal “seem unfortunate”. “I do not share them, I do not agree”, has abounded and has charged against the “homogeneity” imposed by the PP, in his opinion, with his departure. “They will make a more homogeneous formation but not stronger. That homogeneity makes it poorer […] A political party is not a sect. ”

Casado has been directly recommended to have “people with their own criteria” by his side and has distanced himself from the “labels” of “radical” with a very clear allusion to the so-called moderate profiles that have the support of Vox to govern, such as José Luis Martínez-Almeida, proposed as the new national spokesperson for the training, in the Madrid City Council or Juan Manuel Moreno Bonilla in the Junta de Andalucía. “Surely my departure will be interpreted as a commitment to moderation in the face of radicalism […] Curiously, he happened to be the champion of Vox when few people have written harsher words. People who govern thanks to the support of Vox pass as moderates in those same media “, he has referred after admitting that he has been able to say” heterodox or surprising things but never to the detriment of Mr. Casado’s authority or the interests of the Spanish center-right. ”

Among the triggers for his dismissal, Álvarez de Toledo has mentioned two. First, that the party was not willing to defray the costs of the appeal before the Constitutional Court that the exportavoz wanted to carry out so that the journal of sessions would record its attacks on Pablo Iglesias’s father, whom he called “son of a terrorist”. “It seems to him that I have no need to raise this appeal and he was not willing to pay for it,” he explained.

The second, and related to this, is that the PP is not willing to take on “the cultural battle” that Álvarez de Toledo does defend against “radical feminism or historical memory.” “Casado made it clear to me that he is not interested in the cultural battle, that it does not seem to him to be a relevant political issue at the moment,” he said to promise that he would continue to “fight that battle.” For the former number one of Congress, in Spain “the values ​​of the Enlightenment and advanced societies are at stake.” “When morality and convenience coincide, what better opportunity than to embrace that cause. The PP needs to broaden those bases and the path of the cultural battle can attract progressive people,” he insisted.

Until now, the spokesperson has also slipped, among the shocks that have ended with her dismissal, that Casado was “concerned” about her position regarding a future budget negotiation with the PSOE and the “pact” for the renewal of the leadership of Power Judicial, whose mandate has expired and about which socialists and popular people have already begun to speak. “I am not a partisan. We want Sánchez to break with Podemos. If he broke and returned to centrality, that would have a risk for the opposition. The minority party assumes a risk, but it is a patriotic sacrifice,” defended Álvarez de Toledo, who has been referred to United We Can as those who “stayed outside the Constitution” and want to “place the constitutional system at the feet of the horses.”

The voice of the PP in the Congress spokesman has declared that his interview in El País last Sunday, where he distanced himself from the official position on, for example, the support that the emeritus king has left Spain, has accelerated the decision, that the PP has made public through a statement. Casado has convened this Thursday a National Board of Directors in which it is intended to execute the turn to moderation that some barons of the party were already demanding. “A remodeling of the management team”, says the PP in the note. Álvarez de Toledo has decided to anticipate this appointment by calling the press on his own to reveal the reasons for his dismissal.

At this meeting, Concepción Gamarra, current Deputy Secretary for Sector Policy, will be proposed as spokesperson for the Popular Parliamentary Group in Congress; Ana Pastor will become Deputy Secretary for Social Policy; and José Luis Martínez-Almeida, mayor of Madrid, will be the new national spokesperson for the Popular Party.

The appointment of Álvarez de Toledo as spokesperson was controversial since its formalization on July 30, 2019, just over a year ago. President Pablo Casado’s personal commitment, generated a strong internal rejection and since then the recurrent outbursts of tone have aggravated the criticism of his fellow ranks. During this time, the spokesperson has maintained a independent speech, more radical than that of his party leadership, which has propped it up as a loose verse within formation and it has irritated the leadership and prominent barons of the party such as the regional presidents Alberto Núñez Feijóo and Juan Manuel Moreno Bonilla. With the secretary general, Teodoro García-Egea, their relationship was non-existent.