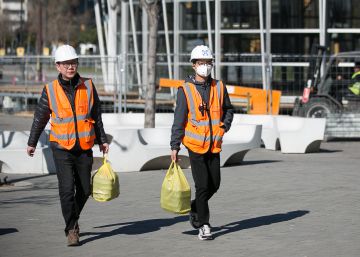 The suspension of Mobile World Congress because the coronavirus is not on the table. For now. The Government, the Generalitat and the City Council continue to call for calm. The association of operators that organizes the congress, GSMA, will tighten the controls beyond what is recommended by the administrations themselves, to avoid contagion. Thus, they will check the body temperature of all attendees. Health Department sources hinted that these measures seek to reduce fear among participants, fueled by the dripping of companies that have canceled their attendance at the congress. These are some questions and answers about crisis management.

What weight did the companies that have canceled? The casualties have affected 10% of the Mobile’s exhibition area. The companies that have canceled had to occupy 12,000 square meters, according to Efe calculations from the congress plans. Ericsson, one of the largest exhibitors, had 6,100 assigned. GSMA refused to report these figures. “People participate in many ways, it’s not just about the exhibitors,” said association sources. The Mobile expected 2,800 companies.

Does Congress congress? Neither the Government, nor the GSMA nor the Generalitat, nor the Barcelona City Council contemplate this extreme. The three administrations and the organization will hold meetings daily until the day before the appointment. “We do not rule out any more casualties,” said the Minister of Digital Policies, Jordi Puigneró. “We are prepared to organize the congress and act against any suspicion of contagion,” he added.

How will the conditions imposed on exhibitors in China affect? GSMA said Sunday that it would ban entry to those who have been in China in the last two weeks prior to Congress. In practice, it means that to enter the MWC they had to leave the Asian country yesterday at the latest to spend a preventive quarantine. Xiaomi said he is following this protocol. Attendees from Hubei, province where the coronavirus originated, will be banned at the event. In the 2019 edition of Mobile, Chinese congressmen accounted for between 5% and 6% of the total.

Why do companies cancel their assistance? They allege that it is a measure of protection towards their employees and customers, despite the fact that the Catalan Government maintains that there is no risk to justify the decision.

Who has powers to suspend the Mobile? WHO has so far been opposed to imposing travel restrictions on the coronavirus, a recommendation that Spain is following. The GSMA could decide to cancel the celebration of Mobile, as it is a private initiative. The decision could also be agreed by administrations, for example, should the position of WHO change in the face of possible new infections.

Nissan will temporarily interrupt the production of its Japanese factory in Kyushu (southwest) due to the problems that the coronavirus has generated in the supply of parts from China. As the newspaper advanced Nikkei, The Japanese multinational will stop its assembly process on February 14 and 17 due to the delays of the supplier companies.

Nissan had already stopped production of its factories in China. The decision comes just when the company was preparing to reopen the Chinese factories, a spokesman said. But the difficulties to receive supplies have forced to anticipate stops in the Japanese plant. The slowdown can impact the production of about 3,000 vehicles and will affect two production lines.
The Nissan plant in Kyushu produced in 2018 about 434,000 vehicles, half destined for the domestic market. The coronavirus crisis has caused delays in Chinese factories and has had an impact on related industries. In South Korea, Hyundai, Kia and Renault have also announced interruptions due to supply problems from China.