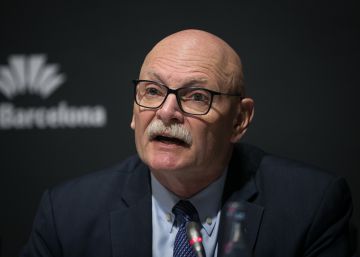 The last day of Mobile is the day of the year that more products without VAT are sold in Spain. But this February may not be. John Hoffman was the person who signed the statement announcing that the world’s largest mobile congress suspended its 2020 edition for the coronavirus. Training architect, Hoffman (Michigan, 1957) is the CEO of the GSMA, the employer of the mobile that organizes the Mobile World Congress (MWC). The man who took the mobile congress to Barcelona confesses in a telephone interview: “These have been the most difficult days of my life, but my partners and my colleagues are my friends and they have helped me cope.”

Question. When did you assume that the Mobile suspension was inevitable for the GSMA?

Reply. On Wednesday morning we had good feelings. And even in the afternoon we thought it was going to be celebrated. But when we analyzed all the factors, we were facing a very difficult decision: it was impossible to hold the congress. We had no choice. We were forced to make an extremely complicated decision. The question is: what will the story say? Do we make the right decision? I think so. We considered the other alternatives and everything led to the same. If we really take the health and safety of our exhibitors, workers and the community seriously, there was no other option.

P. But, then, they ignored the recommendations of the Spanish authorities. “There is no public health reason that prevents the celebration of events of this kind,” said Health Minister Salvador Illa.

R. We had numerous meetings, we talked every day, with the Spanish and Catalan authorities, also with the WHO and the European Center for Disease Prevention and Control[[ECDC, for its acronym in English]. Our greatest asset was our main weakness: 100,000 attendees from all over the world in one place at the same time. If it had been a local or regional event, we could have reached another conclusion. But since our ecosystem is so extensive, so diverse, we had no other choice.

P. So, did you believe in the message of the health authorities?

R. We believe they have been very professional and competent. But we also believe that it is a matter of fear. It was the perfect storm. In the case of SARS – the acute and severe respiratory syndrome crisis of 2003–, the emergency jumped at the end of the congress and declined before the next edition. Something similar happened with Ebola. If we had celebrated Mobile a couple of weeks ago, fear would probably not have been a factor. People suffer different kinds of fear, to fly, to agglomerations, and there is also fear of fear. The health authorities were prepared, but it is the fear of the ecosystem that forced us to make the decision. We consider the reputation of GSMA, of Mobile, even that of Barcelona, ​​but only safety and health were taken into account in the decision.

P. Will GSMA ask its members for money to compensate the rest of the participating companies?

R. No. It is a case of force majeure, the clauses of the contracts are very clear in this situation.

P. Who will pay for compensation?

R. The clauses of the contracts will establish what should be done. I am not a lawyer, but I am sure that lawyers around the world are analyzing it to decide what actions to take.

P. Will the 2021 edition serve to reach agreements and avoid compensation?

R. We don’t have a plan yet. We are still assuming the decision made. My only plan is to return to Barcelona in 2021 for the best edition.

P. Does the GSMA have funds to bear the costs of the suspension?

R. The truth is that I do not know. The costs have never been taken into account.

P. Last Thursday the GSMA general manager, Mats Granryd, said it was not a matter of money. But the reality is that money is and will be the issue.

R. We continue working with our team to decide what we are going to do next hour, next week …

P. The mayor of Barcelona, ​​Ada Colau, has hinted this Friday that the trade war between China and the United States has been a “more element” that has played in the suspension. It’s not the only one. What do you think?

R. Wow! I couldn’t even speculate about it, it’s just fear and a matter of health. I have no idea, I am not in politics or in trade wars, I am only a person who tries to combine the ecosystem to improve mobile technology and humanity.

P. That fear of which he speaks has not been noticed much in the technological fair that has been held this week in Amsterdam. Why?

R. It is interesting because tempos are everything. If the Mobile had been held before, everything would have been fine. In our case it was the perfect storm. I can’t comment on the decisions of others.

P. Have some operators betrayed the GSMA? In the end it was the operators, who are the members of the GSMA, who organized the party and those who said they were not going.

R. Our operators strongly support us and support our decision, and said what they had to say on behalf of their own companies. All institutions and the GSMA agree that we have made a decision thinking about the future. The decision is made by the GSMA, but we all think that the future passes through Barcelona in 2021.

P. Will there be big changes? Do you think that the congress model may be in decline?

R. We are always attentive to innovation. The model works, I see no reasons for drastic changes.