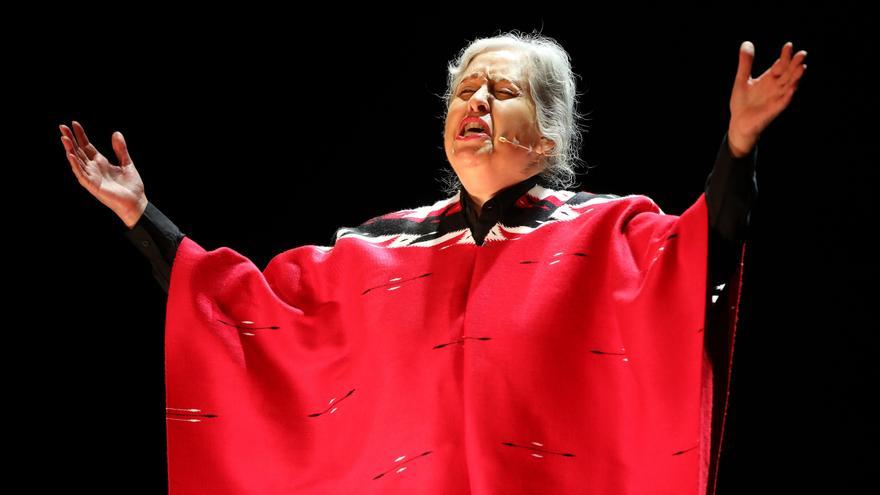 Bogotá, Mar 18 (EFE) .- With a musical that traces the life of the legendary Mexican singer Chavela Vargas, the Movistar Arena, one of the main entertainment venues in Bogotá, will reopen to the public on March 25 after almost a year closed for the arts due to the coronavirus pandemic.

The work is entitled “Chavela por siempre Vargas”, and is “a tribute to a woman who broke all barriers, who broke paradigms, who broke down walls, who faced the difficulty of being a different woman in such a macho country like Mexico, like Colombia could be, “the director of the musical, Manuel José Álvarez, told Efe on Thursday in one of the rehearsals.

The director, who did concerts with the artist, mainly in Spain, points out that this work is “the ideal excuse” for people to meet again “with culture, with art, with theater, with music, with dance. “after a difficult year and almost total paralysis of the entertainment world due to the covid-19 pandemic.

“I wanted to tell Chavela from an old age and for her to go through her life from childhood, to her youth, until she reached her great success at the Olimpia Theater in Paris, at the Carnegie Hall in New York, at the Palacio de Bellas Artes de México. “says Álvarez, who was director of the Teatro Colón in Bogotá for five years and is one of the most acclaimed professionals in the country.

The actor Julián Román will play the singer José Alfredo Jiménez, eternal idol of ranchera music, and Diego León Hoyos will play the role of the Spanish film director Pedro Almodóvar, who was an important figure and one of the close friends in the last stage of the life of Chavela Vargas.

The dance corps, made up of nine dancers, will be directed by Jimmy Rangel, creator of dozens of projects in Colombia and abroad and who has collaborated in shows by Lady Gaga, Cirque du Soleil or La Fura dels Baus, among others.

The musical part will be in charge of the Contemporary Mariachi, made up of young people from different music schools in Colombia such as the Philharmonic Orchestra, the National University Conservatory, the Ibagué Conservatory, the District University Orchestra and the Bogotá Youth Symphony.

The director of “Chavela por siempre Vargas” recalls that the artist, born in 1919 and died in 2012, was a woman whose “weaknesses, her excesses, her vices almost led her to disappear”, but she overcame everything ” and he returned with more force, with more power “and always moves those who listen to his songs.

“He who is not moved by that voice and with those lyrics by Chavela is because he does not have a heart,” he says.

Álvarez recalls that Chavela Vargas made her debut in a theater at the age of 72, during a tour in Spain, because “before, the rest of her life, she sang in canteens, in palenques, in towns, on the street.”

“For her arriving at a theater, the Lope de Vega, in Seville (Spain) for the first time at the age of 72, was an enormous event”, says the director.

THEATER IN THE PANDEMIC

In view of the restrictions imposed by the pandemic, artists have used masks all the time in rehearsals and are tested weekly for covid-19, an experience that he considers difficult, “but we have gotten used to it.”

And the public that attends the Movistar Arena will have to follow all the biosafety protocols, which is why the capacity of the place, of 14,000 people, was reduced to a maximum of 2,000, “with an algorithm that will allow distancing” and the work there will be no intermission “to prevent people from crowding in the bathrooms or having a snack.”

“We hope that the covid allows us to complete the season (…), that the Bogota public vibrate again, to feel, to cry, to be moved by the loneliness of Chavela, with the loves and heartbreaks, with the vices, the weaknesses and strengths of that exceptional woman who was Chavela Vargas “, says Álvarez.