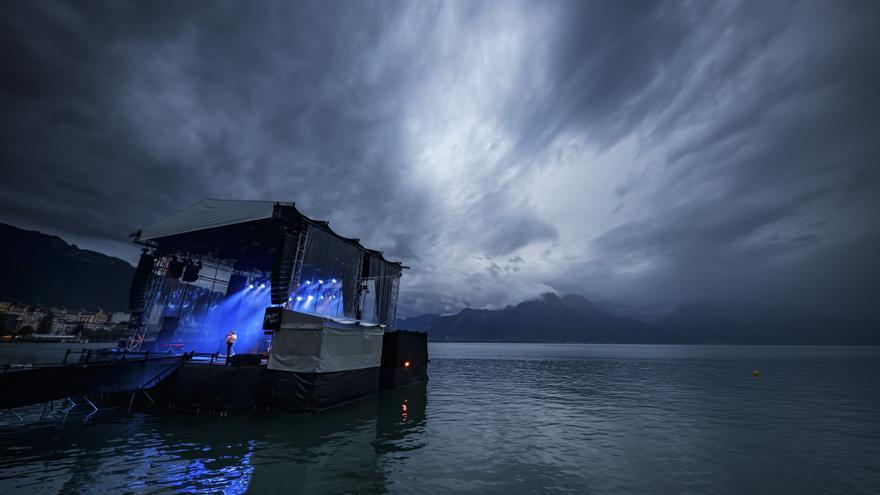 Montreux (Switzerland), Jul 10 (EFE) .- With a reduced format due to the COVID-19 pandemic and despite the fact that some concerts have had to be suspended due to the rainy summer that Switzerland suffers, the Montreux Festival is back after a blank year, which marks a certain return to normality for the Central European country.

After the suspension that the pandemic forced last year, and to commemorate more massive editions, the city on the shores of Lake Geneva this year has decorated its stages with great stars who performed in them, such as Elton John, Ray Charles or Carlos Santana.

The rain forced the cancellation of today’s main concert, by Sam Fischer and that the stage that this year has been created on a platform on the shores of the lake should be held, although the spectators were able to enjoy other artists who performed in it in the previous hours.

Some of those spectators were not on the banks of the Leman, but on board the dozen yachts and sailboats that approached the new stage.

The festival, an institution in the world of jazz and pop-rock, has not freed itself from the limitations of capacity and social distance to control the pandemic, nor from masks, although in outdoor areas they were not mandatory and nobody wore them.

The festival has a vaccination center as well as a health post so that the most lagging attendees can take a rapid antigen test, although both were empty today, largely because most Swiss already have their vaccination certificate since weeks ago.

Despite all the inconveniences, the spirit of the famous jazz festival, the same one that caused two people to start playing trumpet and saxophone at around five in the afternoon on the roof of their little boat on the shore of the lake, continues Present.

Among the headliners of this edition are the young Argentine Nathy Peluso, the Italian singer Zucchero, the trumpeter of Lebanese origin Ibrahim Maalouf or the Malian Fatoumata Diawara, among others.

The Swiss government authorized the realization of this musical event, one of the first of a large caliber since the pandemic began, given that the epidemiological situation in the canton of Vaud, where the festival takes place, “is completely under control” and vaccination is well advanced, according to organizers.

Unlike in other editions, outside the perimeter of the festival there were no food and drink stands, although certain areas of the venue can be accessed for free with an online reservation, to attend some concerts and restaurants.

Last year, in the absence of live concerts, the festival offered through the internet some of its most memorable old concerts, in order to somewhat alleviate their absence that summer after more than half a century without missing their appointment with him. Swiss public.

Thus the concert that John Lee Hooker gave in the Swiss city in 1983, the recitals of Suzanne Vega and Carlos Santana in 2004, that of Nina Simone in 1976 or the one that the Deep Purple gave in 2011, whose famous song “Smoke on the Water “recalls the 1971 Montreux casino fire.

The festival is for Switzerland one of the first massive events in almost a year and a half of the pandemic, in which the country had to give up events such as the Ice Hockey World Cup, the Locarno Film Festival, the Geneva Auto Show. and many other important events for the Central European country. Cristina Gallego