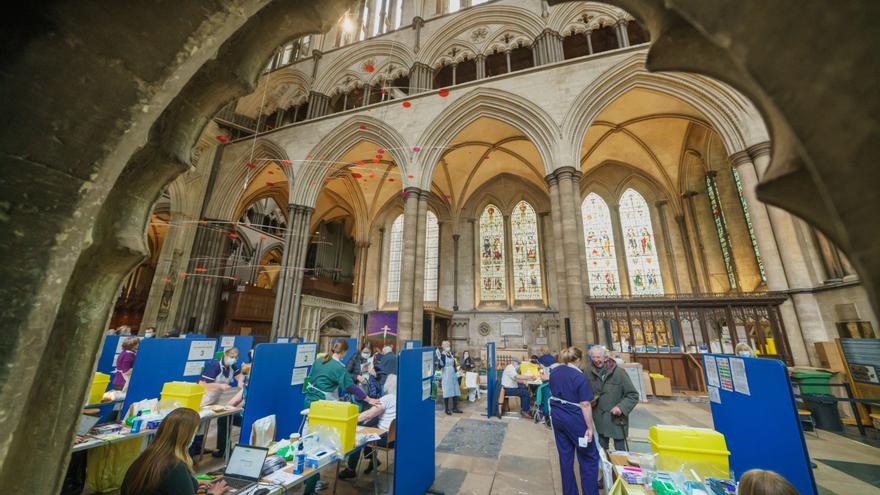 London, Apr 2 (EFE) .- The most important moments in life have (or should have) their own soundtrack, which connects us with memories as memorable as receiving the vaccine to try to stop a global pandemic.

But … what is the right music for a vaccination? That was what the young organist from Salisbury Cathedral (southern England), John Challenger, asked himself, who tells in an interview with Efe how he has given an answer in the form of an album, the benefits of which will go to the British health service ( NHS).

The dean of the cathedral decided to convert this 13th century gothic building into a temporary vaccination center, with the possibility of entertaining the sessions with the centennial organ of the temple, known as “Father Willis”.

The cathedral “is not only an absolutely beautiful space” to receive the vaccine, but, with the music, it also “makes people feel a little more welcome,” says Challenger.

This temple is one of the many buildings that have been converted into “vaccine fields” in the successful immunization campaign in the United Kingdom, which has already administered the first dose to more than 31 million people (more than half of the adult population ).

Taking into account that the cathedral, the nerve center of the local community, has been closed to the public for almost a year, for many of Salisbury’s residents it has been special to be able to cross its doors again, and do so to receive their covid vaccine .

“Many people were entering for the first time in a long time, so it was already a special experience for many of them, and also listening to this excellent organ and live music is exceptional at this time”, narrates the organist.

An authentic musical experience that has already lasted more than 280 hours and has been received very positively by the people of Salisbury, making clear the “importance of music” to overcome the current situation, according to Challenger.

The idea of ​​creating a charity album for the NHS would come later, thanks to “a friend of a friend”, award-winning producer and music engineer Andrew Mellor. “It was such a good idea that I couldn’t say no,” explains Challenger.

Only two weeks passed from the time of the proposal to the recording in Salisbury Cathedral, a period that Challenger describes as “very fast, although very enjoyable”, since the process of producing an album usually takes a long time. higher.

For this album, entitled “Salisbury Meditation”, Challenger chose a repertoire “familiar” to people, which counteracts the uncertainty of the current moment with “relaxing and meditative” works such as the famous “Carnival of the Animals” of the French Saint-Saëns, as well as classical pieces by Bach, Händel or the British Edward Elgar, among others.

All of them in charge of “Father Willis”, an organ built by Henry Willis in 1877 and that, according to Challenger, sounds “almost the same as when he devised it”, despite the fact that it had to be repaired in 2019, when the Cathedral lost its most precious piece for fourteen months.

MUSIC AS A LIFEGUARD

“It has been the most wonderful reward to have him back in our lives”, underlines the young organist, who has been in charge of making the organ sound for 9 years, and feels “incredibly lucky” to carry out this work, especially during the pandemic.

“I have continued to be employed and there have been things I have been able to do, but it has not been the case for many musicians, especially the freelancers. We are in the middle of a real crisis for art,” says Challenger.

The organist, convinced of the power of music to “transform lives”, hopes to raise with the sale of the album “as much money as possible for the British National Health Service (NHS)”, to thank them for all the “amazing” things that have done, especially in this last year.

In addition, it encourages all those who are not lucky enough to listen to live music while receiving the puncture, to download their “Salisbury Meditation” on digital platforms and to enjoy a few “calm minutes” after being vaccinated.