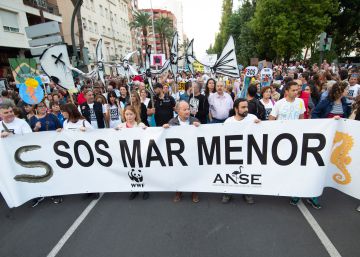 Legislative measures to save the Mar Menor They continue to accumulate. The Government of Murcia -PP supported by Citizens- approved this Thursday in the Governing Council the decree law of Comprehensive Protection of the Mar Menor. The Minister of Agriculture, Antonio Luengo, acknowledged at a press conference this morning that “with this decree only the Mar Menor will not recover”, because it only regulates the uses. He has thrown balls out and reminded the Government of Spain that “if you don’t do your homework it will be very difficult [la regeneración]. Zero discharge plan measures are already necessary. “

The decree, which includes a sanctioning and control regime with fines of up to 500,000 euros, according to Luengo, must still be approved by the regional Parliament, something that seems to be guaranteed given that Vox has announced that it will support it because they “have included in him all his claims and modifications “, in addition to those of the farmers. According to Luengo, society “has sent us a clear message, Recover the lagoon, and it is our task. There are no partisan policies or interests on this path, and no one will understand the vetoes to a law as necessary as this one, “he said.

The region currently has the Law for the Protection of the Minor Sea from Urgent Measures, approved in February 2018, in addition to also having a comprehensive management plan, among other regulations. The conservationists of ANSE, a very active group for years in the complaints about the state of the lagoon, say that “the decree is made quickly to get out of the way and does not bring anything new.”

The document divides the affected area into two zones (the I, closest to the sea, and the II). Within the star measures, the ban on the use of fertilizers, manure or green fertilizer, which is now 100 meters, and the direct application of slurry (from livestock) is extended to 500 meters. They also limit in the zone I the amount of annual crops depending on the size of the root and the management and the transformations of dry land to irrigation are prohibited.

With these measures, it is intended to tackle the great problem of the lagoon, which has its main origin in the discharge for decades of waters with nitrates from agricultural fertilizers. Official data estimate that 300,000 tons of nitrates have accumulated in the aquifer that discharges into the lagoon. Urban wastewater discharges have also contributed. As a result, 85% of the seagrass beds of the Mar Menor have been lost and are still remembered with horror in the area the massive death of fish that took place last October.

The decree establishes a temporary exclusion area for new urban developments until the Territorial Planning Plan of the Mar Menor Watershed is approved, for which a term of five years is set. There are exceptions: it may be built if it is the natural extension of consolidated urban areas. This new plan will include the adaptation of agricultural uses, the establishment of an ecological corridor around the Mar Menor as a natural filter, improve the urban quality of the built areas and regulate the urban density.

As for recreational uses in the lagoon, the construction of new marinas is prohibited, a measure already included in the comprehensive management plan, and two-stroke carburetion boats, high speed or those that reach excessive sound levels . Boats that exceed eight meters in length must have a deposit of sewage and gray water, and those that have an engine, use biodegradable oils.

“A plurality of uses converge on the Mar Menor, and only if they harmonize in a sustainable way will they recover,” said the director. Luengo has explained that what is intended is “to order and control, in a more exhaustive way, the activity that surrounds the Mar Menor and recover its state”.

The PSOE of Murcia is not willing to support the decree. On Monday, he presented a battery of urgent measures to improve the draft, among which was that fertilizers could not be used in an area of ​​1,500 meters from the coast line, compared to the 500 established by the project. At the same time, they indicated that territorial planning should affect the entire basin and that it be carried out in three years, not five.