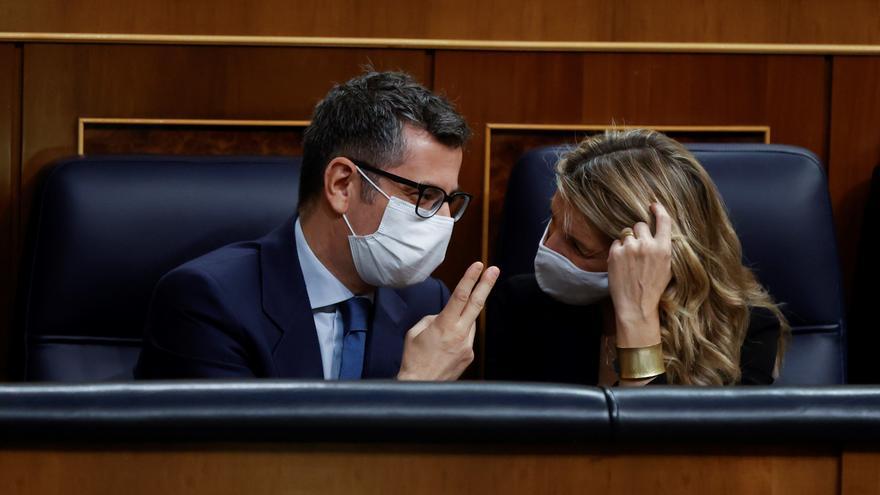 History repeats itself. The protagonists, the geographical location and small details of the script change; but less than a year apart, representatives of the Spanish right have betrayed the PSOE on two occasions in their search for centrality on the board. With nuances: the motion of censure in Murcia was a move to try to wrest power from the PP with a Citizen regretting having put himself in the hands of Pablo Casado in 2019 and the 'Navarre betrayal' is the response to the Government's need to have sufficient support to carry out the labor reform, the star measure of the legislature that the coalition has ended up choking. If the failed operation in Murcia caused a political earthquake with the calling of elections in Madrid – which largely led to a government crisis after sweeping Isabel Díaz Ayuso and the elections in Castilla y León –, the shock wave of the UPN operation is yet to be determined: it will depend substantially on the courts to which both Vox and the PP have resorted. Before, the results of next February 13 in Castilla y León could give some clues.

"The lesson we draw from the vote is that the PP of [Pablo] Casado and Teodoro García Egea are capable of anything", affirmed the number two of the PSOE, Adriana Lastra, one day after the two UPN deputies who had guaranteed the socialists their 'yes' to the new labor regulations decided to vote against it, in what Ferraz sees as a maneuver orchestrated by the PP leadership . "The PP is capable of anything, including putting institutions at risk, attacking them and democracy itself to ultimately try to harm the government," added Lastra before the smear operation in Congress that have promoted PP and Vox, which will take the vote to court by the mistake of a parliamentarian who, if he had chosen well the option marked by the popular group, would have meant the immediate repeal of the first labor reform that recover rights for workers.

In the PSOE they are convinced that what lies behind the move to overthrow the labor reform is another case of turncoat. "Buying the will of the PP and the only thing left for us to know is the price that the PP has paid," Lastra asserted this Friday. The concern in the socialist ranks, who take for granted that there will be no going back to Thursday's vote, is, to a large extent, the damage to the image of the institutions that can encourage anti-politics and give wings to Vox and that conception trumpist of public action. In the PSOE headquarters they have long believed that Casado stopped worrying about decorum and respect for the institutions, immersed as he is in an internal struggle to survive as party leader. As an example, they cite that he has even abandoned the Anti-Transfuguism Pact that PSOE and PP signed two decades ago, with Aznar as Prime Minister.

Also the president of UPN, Javier Esparza, sees foul play in the turn of Sergio Sayas and Carlos Adanero, from whom the management has claimed the act of deputies while preparing his expulsion. "The situation is inadmissible," he said in an interview on Cadena SER: "They do not represent UPN." The regionalist party is mired in a new internal crisis. Esparza suspects that other formations knew about the decision of the two parliamentarians (and he did not). "I have the feeling that what was happening and what was going to happen was known there all day long. Time will make things clear," he warned.

In the retina of many socialist leaders continues the frustrated operation of the PSOE and Ciudadanos in Murcia, where the socialists agreed with Inés Arrimadas on a motion of censure to expel the PP from the presidency. The general secretary of the PP, Teodoro García Egea, worked hard at that time and Fernando López Miras managed to stay at the head of the Government thanks to three Citizens deputies who rejected the initiative despite having signed it. Everything was done in broad daylight. In exchange for the votes, López Miras reserved the three (and a fourth in case the list ran) well-paid positions in the regional Executive. The Commission of the Antitransfuguismo Pact, a great agreement sealed in 1998 to avoid the purchase of wills in politics, declared the Murcian president and the hitherto members of Ciudadanos to be fugitives. Casado cared little. The PP's reaction was to get out of the anti-transfuguismo pact, putting an end to more than two decades of fair play partisan (at least on paper). The Socialists now await the next step of the wayward parliamentarians from UPN at a time when the party is debating its policy of alliances with the rest of the right-wing parties with whom it has coalesced under the umbrella of Navarra Suma. "We will know sooner rather than later what they have been offered and how it will materialize," warned Lastra.

Félix Bolaños himself, who played a leading role both in Murcia and in the negotiation of support for the labor reform, recalled this Friday that not only did the UPN deputies vote against his party's guidelines, but there was also a deputy in the Mixed Group, Pablo Cambronero, who left Ciudadanos. "They are turncoats. Let's not make jokes with turncoats, which is twisting the popular will," the Minister of the Presidency and Relations with the Courts said on Onda Cero. Despite the background, the PSOE maintains confidence in the Arrimadas leadership, whose nine deputies did vote for what was agreed.

Both in the case of the motion of censure and that of the labor reform, the Socialists maintain that they have no responsibility and that they trusted their word, although they are still trying to recover from the aftermath of the coup in Murcia: the defeat against Ayuso that led to the takeoff of the PP in the polls and whose effect will have to be determined in the elections of Castilla y León and Andalusia as a previous step to the regional and municipal elections of 2023.

However, at United We Can they have always questioned the PSOE's strategy of trying to get closer to Ciudadanos. That was the great struggle with Pablo Iglesias as vice president at a time when Moncloa dreamed of being able to count on the ten seats of Arrimadas for the Budgets in 2020. The investiture block was later consolidated with the second consecutive public accounts, but has broken in the labor reform.

In the Vice Presidency of Yolanda Díaz they recover the same mantra. "Variable geometry cannot be trusted," they pointed out this Thursday after the scare in the vote. However, the socialist wing recalls that it was the Ciudadanos formula that was going to save the decree – if the Navarrese deputies had maintained their intention to vote in favor.

If for months the PSOE and the president's entourage boasted of the possibilities of variable geometry to agree on the right and left, after the double fiasco in Murcia and the labor reform, now it does so with a small mouth, even though in the negotiation of this last decree, the investiture route that Yolanda Díaz tried did not bear fruit either. Although the Socialists maintain that their will is to add as many supports as possible, they conspire to keep the investiture partners who have given them stability throughout the legislature, except at specific moments of confinement. "Nothing changes," assured a minister during the plenary session of the labor reform. “We are convinced, and it is not that I say it, it is that the other forces say it, that from this moment on we will meet again on the road in the different votes. ERC and PNV have said it. the PSOE is working", settled Lastra.