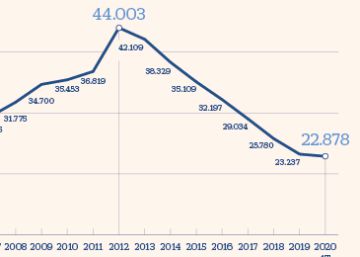 The last proposal that the Ministry of Finance made to local entities to make it easier for them to use their surpluses has not been well received by almost all opposition parties, who demand the use of their remnants without the conditionality of handing them over to the state coffers and be able to fully control the management of its resources, which in recent years has generally been more than efficient. In fact, since the previous crisis, local corporations as a whole have registered a surplus (3,839 million in 2019), and their debt has been gradually reduced by half, going from 44,003 million euros in 2012 to 22,878 million at the close in the first quarter of this year (1.8% of GDP).

This means that while the state debt and that of the autonomous communities have experienced an upward trend, the municipal debt has followed the opposite path, currently standing at levels recorded at the beginning of the century. Specifically, there is no lower figure since 2002, when it stood at 21,522 million, according to data from the Bank of Spain.

In addition, another of the most striking points is that large cities, with more than 300,000 inhabitants, have managed their resources in a somewhat more optimal way than the national average. The towns that exceed that population number are thirteen, whose total debt amounts to 5,117 million euros, with data from March, almost a third of eight years ago, when it was 13,337 million.

Among them, the city of Madrid stands out, as it is the one with the largest debt, and Las Palmas, on the contrary. The debt of the capital of Spain amounts to 2,005 million euros, followed, with a large margin, by Barcelona (731 million) and Zaragoza (703 million). On the opposite side is the Canarian municipality with only 2 million euros of debt, together with Bilbao, with 3 million; followed by Alicante (23 million) and Valladolid (97 million).

By instruments, the vast majority of the debt, some 22,000 million, is housed in bank loans, of which 95% are long-term. On the other hand, the issuance of bonds is the least used option, with only 806 million in the long term, which correspond to the city councils of the largest cities, which are those with a financial rating. For its part, Madrid is the one that covers the vast majority of debt issuance, with 700 million, compared to Barcelona, ​​with only 35 million. The rest is issued by the island councils, councils and councils.

In this sense, within the rubric of local authorities, the island councils, councils and councils register a debt of 4,240 million euros in the first quarter and more than half corresponds to the provincial councils of the Basque Country. Likewise, the figure for the autonomous cities of Ceuta and Melilla totals 242 million.

On the other hand, to the debt of the town councils we must add the 3,275 million that the municipal public companies have, an amount that they have only through bank loans, the vast majority long-term.

In this way, the behavior of local corporations is opposed to that of the central Administration, whose debt has not stopped growing and rose to 1,094 trillion euros in the first quarter of 2020 (88.5% of GDP), compared to the 761,163 million registered in 2012. In the closing figure for March, the issuance of medium and long-term securities by the State is concentrated in a majority, according to data published by the Bank of Spain.

For its part, Social Security bears a debt of 55,000 million euros (4.4% of GDP), while that of public companies dependent on the central Administration is 30,200 million (2.4% of GDP). In the latter case, the figure is less than the 33,436 million of debt registered in the middle of the financial crisis. Finally, the debt of the autonomous communities stood at 298,000 million euros in March, which represents 24.1% of the economy; and a rise of 57% from eight years ago. The regions that stand out for being the most indebted are Catalonia, Valencia, Andalusia and Madrid.