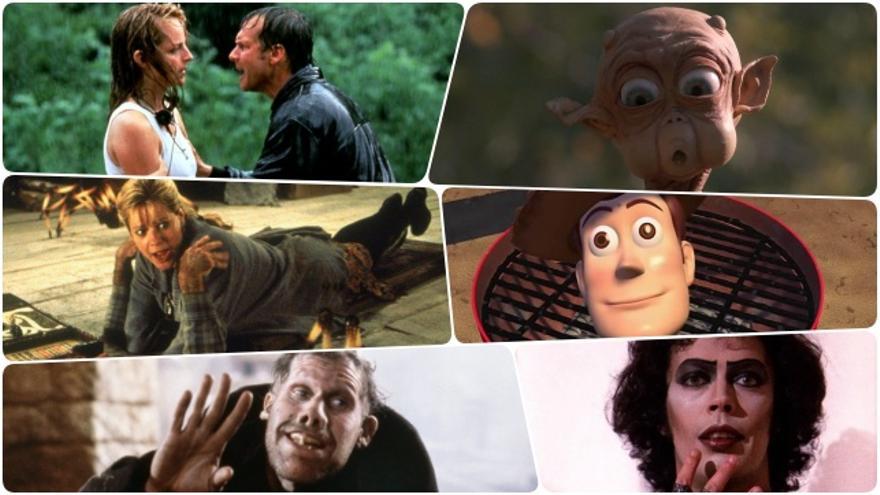 “The strongest and oldest emotion of humanity is fear, and the strongest and oldest type of fear is fear of the unknown,” said the writer HP Lovecraft. What the Solitaire of Providence missed is that sometimes it is not necessary to summon Cthulhu for certain scenes to become part of our nightmares. Sometimes, terror appears without regard to logical reasons and with products that are far from belonging to that genre.

For this reason, on the occasion of Halloween, several journalists from elDiario.es have taken off their masks to publicly point out and shamelessly those films that without being scary have ended up terrorizing us for some reason. It may be because of a specific scene, because of the context in which we saw the film or because of some particularly tricky character, but all the titles compiled here have something in common: they were etched in our retinas and not precisely because they were entirely pleasant.

Of course, this list is entirely subjective and addresses the fears of whoever describes the film. That is why we encourage you to share it with us if you have any other particular suggestions in the comments section. Let’s start with this passage of no-terror.

Let us assume that the basis of Toy story It is the same one that has served to inspire horror stories: they are dolls that take on a life of their own when no one sees them. This is a norm that Pixar has maintained in all the films because, among other things, observing humans interact with toys that have souls does not seem to be the most comfortable for the spectators (serve as the film Little Warriors).

However, there was a moment when the animation studio decided to break with the golden rule: when in the first film the toys dismembered by Sid decide to stand up to him. The baby-headed spider, the doll-legged fishing pole, the soldier with a nail through his helmet… They all devise a plan to scare the person who had been abusing them. In the resulting scene, you can also see Woody turning his head 360º like the Exorcist’s girl and addressing the boy directly: “We can see everything in the toys, so play fair”, the cowboy says angrily, thus unleashing the worst fears. Sid and any kid who might be watching the movie.

Many of you will not remember this movie that hit the screens six years after the success of ET the alien. Give thanks for it. My friend Mac was a monstrosity trying to follow in the wake of one of Spielberg’s masterpieces: a story of friendship between a child and an alien who wanted to return to his family. The premise was very similar. The result, terrifying.

The supposed film for all audiences caused me dread for many reasons. That big-eared, bulging-eyed Hacendado ET was anything but an adorable little creature you’d like to have tucked into your closet. The fact that the caramel alien stalked a child in a wheelchair through holes in the wall didn’t help much either.

To add insult to injury, the movie was a showcase of cheeky product placement destined to sell cocacola and hamburgers to the little ones. Years before Pennywise the clown terrorized us in Item, this film “for children” was ahead of its time giving a starring role to Ronald McDonald himself. And then if there were many addictions in the 90s. It doesn’t surprise me.

The first time you see JumanjiIf you are under 12 years old, it is difficult to sleep. Can you imagine sinking to the ground while half meter spiders try to eat you And you can’t even move your hands You think in giant mosquitoes that they were able to smash the moon of a car with their bite or the carnivorous plant that can grab you from meters away.

If when you wake up you look in the mirror and see a monkey, you won’t be surprised. And you live in perpetual fear of being crushed by a stampede while sitting quietly in the living room. For all these things and more, Jumanji is one of the scariest movies to watch as a kid. And an adult too.

Music, latex and sex. At first sight, The Rocky Horror Picture Show it’s not a bit scary. Still it is one of the must-see movies of every Halloween night. Starring Tim Curry and Susan Sarandon (amazing Susan Sarandon), it’s a kind of b-series rock musical that mixes satire and science fiction. Still not scary.

The adrenaline comes precisely on the night of October 31. Throughout the planet, theme parties are organized in cinemas and theaters to pay tribute, sing and also have a little fear in the dark surrounded by unknown people disguised as Transylvanian. The one who doesn’t throw glitter on your face, yells at you an inch from the back of your neck. Although, surely, this is not the best year to try and get hooked on Rocky Horror and feather boas.

Among the most disturbing moments in the film, I would highlight the opening lips, the welcome to the visitors of the butler Riff Raff and the scene in which Eddie appears, the ex-lover of motorcyclist and saxophonist of Dr. Frank-N-Furter.

It is normal to think that The name of the rose it has absolutely nothing to do with terror. That the search for the truth of Fray Guillermo de Baskerville – eternal Sean Connery -, is an intrigue with dark touches, but in no case an openly terrifying film. After all, how scary could a seemingly quiet Benedictine abbey and humble, peaceful Franciscans give?

Well, the fact is that whenever I think of the adaptation of the famous Umberto Eco novel that Jean-Jacques Annaud made in 86, a chill runs down my spine. And I am struck by memories of the terribly severe face of Feodor Chaliapin Jr. who played Jorge de Burgos, the bulging eyes of Elya Baskin in the role of Severino, in the impossible hairs of Volker Prechtel as Malaquías, in the tortured Salvatore of Ron Perlman or in the terrible death of Brother Berengario who gave life to Michael Habeck.

I invite you to review that great movie, or to Google the characterization of some of the names I just mentioned. You will understand perfectly the fear that those Franciscans inspired in an impressionable boy like me. At that time, my grandmother made me recite on the phone “the Church is a shop, the priests are the merchants, and at the ringing of the bells, the ignorant come”. I guess it all contributed to the clergy allergy that I still carry.

No vampires, no zombies, no spirits, no curses. Wherever a storm lady is, all other terror proposals be removed. For some reason that I still can’t remember – and with less than ten years considering that it was released when I was just three – we decided to see Twister in my house. From that moment the stormy days turned into absolute nightmares. And so they stay. In Jan de Bont’s tape, Helen Hunt is a meteorologist whose father died when she was little by a tornado, which is why she decides to dedicate herself to studying them. In fact, she has built four devices named Dorothy with the designs of her husband Bill (Bill Paxton), from whom she is about to part ways.

The arrival of Oklahoma’s biggest storm encourages them to hit the road to “hunt” tornadoes and thus be able to generate more advanced warning systems. So far, all very heroic and beautiful, if it weren’t for the fact that they will try to get into tornadoes that laugh out loud at the recent storm Barbara. Thus, in a situation in which any of us would flee without looking back for refuge and counting the last minutes before our death, this bunch of reckless drives towards them and carries rubber and rope systems, which I later checked a thousand times. have at home. Of course, without success.

As a subplot, an attempt at a love triangle is introduced that in such a context does not matter to anyone. The big prize for relevance goes to a cow that “flies” into the sky trapped by the storm and the anguish caused by each scene in which the typhoon is fought to the limit. It does not matter that in Spain storms of this type are so extremely exceptional, the film will make you know its bestiality and danger to rise to the first place in the list of phenomena that will weigh down your rainy days forever.

Tags: fear, films, name, not, rose, story, They are, they terrorize, toy