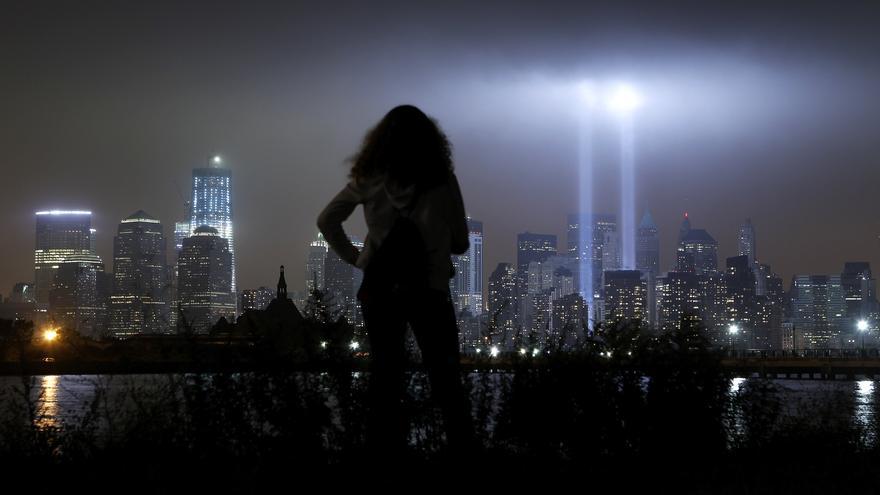 The images of the Twin Towers collapsing on the ground of Manhattan will be forever etched on the retina of those who lived that fateful September 11, 2001. Few (if not any) images in the stories possess the power of impact of the snapshots of the planes sinking into the buildings that were then symbols of New York, from USA, of the power of western civilization. The world changed in an instant, and the entertainment industry could not stop recounting the event and everything that came after.

The North Tower, on fire but still standing, among the great smoke that its twin caused after collapsing. NYC Police Aviation Unit

If rivers of ink have been written about the causes, the consequences, and the course of that dramatic day, there are no less films, series and documentaries that have reflected his feelings: pain, fear, anger, helplessness or confusion are only some of the feelings that go through the mind of the viewer. For those who still believe that they have things to know about the 9/11 attacks, those who want to see another point of view of that reality or those who are not very focused on what happened on the day that changed the world forever, this is one compilation of best audiovisual productions on the attack on the Twin Towers that have been done in the last two decades.

What may be the most famous film of the 9/11 attacks is directed by Oscar winner Oliver Stone and starring Nicolas Cage and Michael Peña, who play two Port Authority police officers who entered the burning towers to evacuate the caught up. The scriptwriters relied on actual testimonies from survivors of the attack. The patriotic tone of the entire 125-minute film was applauded by the Americans.

Despite the fact that they star in the most remembered images, the Twin Towers were not the only targets of the attacks of September 11, 2001. In them 2,996 people perished (including the 19 terrorists), to which we must add 189 in The Pentagon and 44 on United Airlines Flight 93. It is precisely on the latter that 'United 93' is focused, a production by Paul Greengrass that is also a tribute to the passengers and the crew who managed to prevent the plane from crashing into the Capitol, the target of its hijackers. The 111-minute film was nominated for an Oscar for Best Director and Best Editing.

'United 93' is available on Netflix.

Based on the novel by Jonathan Safran Foer, the film is set one year after the attacks. Oskar Shell, a nine-year-old boy with Asperger syndrome, has lost his father in the Twin Towers. Months after the event, he finds a key that belonged to his father hidden in a vase and will undertake a search in New York City for the lock he opens. Two Oscar nominations and a cast that includes Tom Hanks, Sandra Bullock and Viola Davis attest to the quality of the film, which is just over two hours long.

It is Netflix's big bet on the twentieth anniversary of the tragedy. Headliner Michael Keaton, who plays Kenneth Feinberg, a lawyer appointed by the attorney general of the George W. Bush administration to create the compensation fund for victims of the attacks and their families. It is a drama on the legal surface but with an undeniable human background, something to which the outstanding performances of Keaton and the two co-stars: Stanley Tucci and Amy Ryan contribute.

'How much is life worth?' is available on Netflix.

This military action blockbuster by Kathryn Bigelow chronicles the previous intelligence work and operation in Pakistan by special operations forces that killed Osama Bin Laden, founder of Al Qaeda and mastermind of the 9/11 attacks. Its 157 minutes of duration are not wasted by the events they reflect and by the exceptional interpretations of Jessica Chastain, Jason Clarke or Joel Edgerton, among others.

'The darkest night' is available on Netflix

Three series not to miss

This dramatic miniseries is based on the book of the same name by writer Lawrence Wright and stars Tahan Rahim and Jeff Daniels. The story travels to the 1990s, specifically in the times when the FBI and CIA, in an uncoordinated power battle between bodies that ultimately proved fatal, dealt with the rise of Al Qaeda and Osama Bin Laden. It consists of ten 50-minute episodes.

'The Looming Tower' is available on Amazon Prime Video.

'Isaac and Ismael' is the special episode that aired prior to the third season of the series. Dedicated to the memory of those killed in the attacks, the episode does not follow the plot of Aaron Sorkin's fiction. It tells how the White House had to be evacuated because of a terrorist threat generated by a radical Islamic group. It is also seen how one of the protagonists explains to a group of schoolchildren the causes behind the holy wars and the terrorist attacks.

Another series with the signature of Aaron Sorkin that reflects the heritage of 9/11, this time the operation that led to the murder of Bin Laden. Some magistrates Jeff Daniels and Emily Mortimer tell the human face of journalism in a chapter in which they get excited like the rest of Americans when they tell the operation against the man who planned the attacks on the Twin Towers, Pennsylvania and the Pentagon.

'The Newsroom' is available on HBO.

Four documentaries to inform yourself

Yes 'How much is a life worth?' It was Netflix's great asset in the field of fiction, this series of documentaries is its bet for non-fiction. In addition to the events of September 11, 2001, this series of five chapters lasting just one hour explores the aftermath of the event until it reaches a topical topic: the war in Afghanistan.

'Tipping point: 9/11 and the war on terrorism'. Netflix

'Tipping Point: 9/11 and the War on Terror' is available on Netflix.

Apple manages to get into the bowels of the White House in 2001 and collects testimonies of how important people such as the then President, George W. Bush, Vice President Dick Cheney, the National Security Adviser or the Secretary of State lived through 9/11. . This one-and-a-half hour documentary shows from a unique perspective what that decision-making was like against time.

'9/11: This is how the White House lived' is available on Apple TV.

Through testimonies of witnesses, survivors and family members, this short documentary, lasting less than half an hour, is proposed as a way to bring the attacks closer to the new generations, those who do not have the impact of the two planes recorded on their retina. American Airlines and United Airlines against the Twin Towers. At the same time, HBO premiered 'The Institute by the Twin Towers', in which eight people who were then students at the Stuyvesant Institute, five blocks from the World Trade Center, tell how they lived that day.

Promotional image of 'What happened on September 11'. HBO

"What Happened on September 11" is available on HBO.

"The fateful day in which there were also signs of hope, courage, heroism and humanity." This is how National Geographic defines this superproduction of four chapters that the queen chain of documentaries has prepared with care to premiere on the twentieth anniversary of the tragedy. In total, the duration of the piece is seven hours. Those responsible examined more than 951 hours of archive material, some pieces never seen before. The emotional load is so high that some users said on social networks that they had been unable to go all the way.

'9/11: Witnesses to the Tragedy' is available on National Geographic.