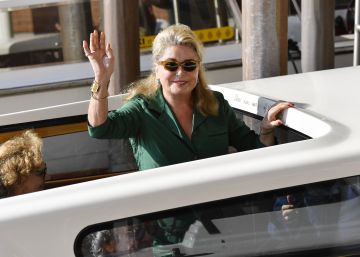 In the Venice Film Festival there are dozens of new movies, ready to be discovered. In addition, the organization has expanded one of its rooms and organized a photographic exhibition and claims that the 76th edition, which begins tomorrow Wednesday, offers a succulent and promising menu. And yet, the feeling of deja vu. The same as last year, or the previous one. "It's like they enjoy being the only dinosaur left," said Laura Kaehr, co-president of the Swiss Women's Audiovisual Network, to The Hollywood Reporter. And like her, several representatives of feminist groups have attacked La Mostra and its repeated lack of inclusion. It is true that, this year, the presence of directors in the contest for the Golden Lion has doubled. But it is what it has move from one to two. Over 21 films in competition.

“Other festivals are making efforts and progress. Venice seems the only one who doesn't even try. They are totally out of the current times. Or maybe it's an advertising ploy, ”Kaehr continues. Con the objective of achieving equality in its programming in the future, The world's leading film competitions, including La Mostra, last year signed a manifesto where they promised to share more information and be transparent about their selection process. After that promise, Toronto has 35% of films led by women, Cannes selected four directors in the race for the Palme d'Or and seven creators competed in the Berlinale. Venice, meanwhile, follows its own. After two editions with only one filmmaker in the contest, they will now be seen The Perfect Candidate, from Saudi Haifaa Al-Mansour, and Babyteeth, of the Australian debutant Shannon Murphy.

The director of the festival, Alberto Barbera, always defends that you cannot choose a film because of the genre of the person in charge. So much that, last year, he threatened to resign If La Mostra introduced a quota system. He adds that the problem is the industry, and a festival selects from the material it receives. This year, in any case, Barbera has stressed that the Venice cinema tells the stories of many female protagonists. Although he notes that several are filmed by men. “Unfortunately, the directors are still a minority. But these portraits demonstrate a new sensibility that was rarely found in the past. It may be the signal that the controversies of recent years have had an impact on our culture, ”he told The Guardian

Their arguments, however, do not convince Melissa Silverstein. “Venice is completely deaf to any matter related to the [movement] MeToo or the [fund for harassment victims] Time’s Up,” he defended The Hollywood Reporter the founder of the Women and Hollywood website, which fights for diversity and inclusion, and director of the Athens film festival. Silverstein uploaded a series of very critical messages to Twitter where he also opened another focus of controversy: there are no women, but there are Roman Polanski and Nate Parker.

The Polish filmmaker, at 85, competes for the Golden Lion with The officer and the spy, which tells the famous anti-Semitic trial against Alfred Dreyfus in France in 1894. But Polanski will not visit the Lido: US justice has been chasing him for decades and stepping on Italian soil can lead him to extradition. In 1977, Samantha Geimer accused him of raping her, when she was 13 years old and he 43. The director himself pleaded guilty "to child corruption", but escaped from the US before the spectrum of 50 years in prison and never returned. But he didn't get rid of his past either.

Parker's case, on the other hand, has already been resolved, but that is not why it generates fewer protests: the actor and director fell in love with the Sundance festival in 2016 with The birth of a nation. His anti-racist ode, then acquired by Fox for more than 15 million euros, was placed as leader in many pools for the Oscars, until an old scandal resurfaced. In the 1990s, a woman accused the filmmaker and her roommate at the university, Jean Celestin, of having raped her. Parker was found not guilty while his friend was convicted. Years later, the conviction was revoked, and the woman ended up committing suicide in April 2012. When all this came to public light, the world turned its back on Parker and his film. Until, now, Venice has remembered him. The director returns with American skin, another battle against discrimination, which Spike Lee himself will present. As much as it is projected in a parallel section, it is one of the most anticipated dishes of the contest.

For Barbera, your choice is obvious: a festival does not act as a judge but rather programs cinema and must be able to distinguish between man and the creator. The director of La Mostra has even compared Polanski with Caravaggio. On the contrary, Silverstein considers that "you cannot pretend to invite people like Polanski or Parker and that does not cause a huge reaction." But the festival doesn't seem to care. He has been on his way for years: he opens the doors to Netflix when Cannes closes them; It has gone from bastion of the author's cinema to Hollywood's second house, so much so that it is already the main springboard towards the Oscars. Hence the head of a major will confess to The Hollywood Reporter: “Maybe we should all be like Venice: ignore what newspapers and media say on-line about Netflix or equality and doing what we want. And then sit back to hear that we are the best festival in the world. ” Or the worst, in terms of inclusion. The debate is already open. And that La Mostra has not even started.